Although she didn’t tell me I figured out Barb’s New Year’s resolution. To try and kill me……In the last week she has tried  not once but twice! Both involved head trauma, both could have been passed off as “accidents” and both were initiated by her. The first attempt occurred as I was outside organizing the belly of the rig. She was inside and called me so I stick my head in the door, am talking to her when BAM! I am struck on the head by a heavy object. I go down holding my head and looking at my hands for blood. Luckily I there wasn’t any but it certainly hurt like hell! Once I was able to get to my feet again I look inside the rig to see the wooden plaque that hangs above our door on the ground. It has decided to fall of the wall at the very moment I stuck my head in and bonk me square on the top of my head! Accident? I don’t think so……
Fast forward an hour…. I have recovered and have a nice lump on my head when Barb asked me if we have room under the bed to fit some stuff. So being the dutiful and wonderful husband I am I dropped everything to comply with her request. Our bed lifts up but the gas struts that hold up the bed are not strong enough to hold it up. No problem we have fishing rods in 4’ aluminum tubes under the bed so I use one of those to prop it up. I am under there organizing stuff to fit what she wants to put in there when she walks in and “accidently” kicks the tube holding up the bed causing the bed to crash into my head and pinned me there momentarily until she lifted it up to see if I was still alive. Does she express concern? Does she apologize? No, she laughs! An evil maniacal laugh!
So my friends, this could very well be my last post. If I do meet my demise in the near future, it has been a good run and please have them thoroughly investigate! For my part, my resolution is to be a better husband than I was last year.....hopefully it will work and she will keep me around!
We rang in the New Year “New York Style” meaning we watched the ball drop in New York and called it a night. We woke up about 1:30am, (1:34 to be exact) to high winds and a torrential downpour. The awning was bouncing around a little so I went out and secured it. After the initial surge the wind died but the rain continued until about 6am. We awoke to the sound of running water and it took a minute to figure out what it was, we now had a river in our backyard! Amazing how a couple hours of rain can change the landscape!


With all the rain came a lot of indoor time and it appears as though Dakota and Daisy have fully bonded, I am not sure they could get much closer! 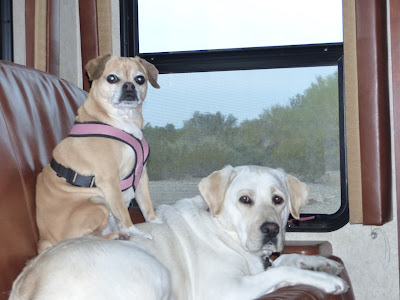 The New Year’s wind also blew in the Colibaba’s from British Columbia. They stayed up there to spend Christmas with their kids but were ready to head south to escape the cold weather. Barb and Ruth planned a happy hour for their arrival, it is great to have them here!

Bring on the Happy Hours!

Posted by Jim and Barb's RV Adventure at 5:12 AM