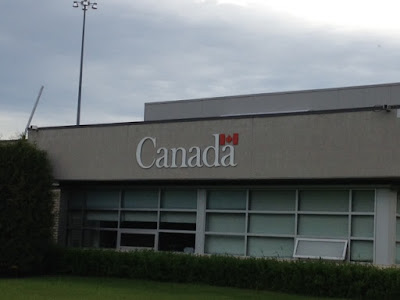 Few places rival the fishing opportunities like the Nipigon area of Ontario. We have been coming up to Pasha Lake Cabins every year since 2006. When we were working we would spend virtually all our vacation time up here. Since hitting the road we have spent every summer and part of the falls there…… That is until last year when we went to Alaska. Even when we were having a trip of a life time traveling the backroads of British Columbia, the Yukon and Alaska we were still talking about how much we missed our friends Chad and Michelle and the fishing in this area. Oh, how we wish could somehow clone ourselves and be in two places at once!

So it was with high anticipation that we left the Barnesville area and started heading northeast. But first we stopped for a couple days at friends and former co-workers of mine Joe and Ruth at their cabin just outside of Dent, Minnesota.


Joe set us up in his neighbor’s driveway as they were spending the summer in….. you guessed it Alaska. It was a perfect spot to moochdock for a few days as we visited Joe and Ruth. They treated us like royalty feeding us at every meal and catering to anything we wanted to do. So what did we do you ask? Well, keeping in theme with our previous post we carried on with seeing a couple of the tourist attractions this area had to offer. 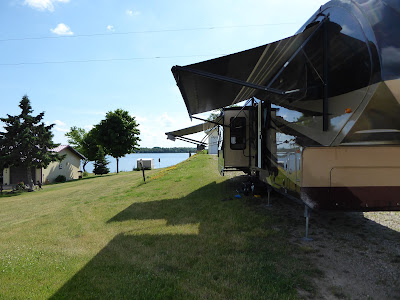 Did you know that Frazee Minnesota has the world’s biggest turkey? Well they do! Not only do they have one, they have several scattered throughout the town. Unlike Dino’s claim about the Rothsay Prairie Chicken in his most recent post, I don’t think these are actually life sized replicas of an ancient subspecies of today’s smaller turkey. We also stopped by Pelican Rapids to get a picture of their giant pelican! 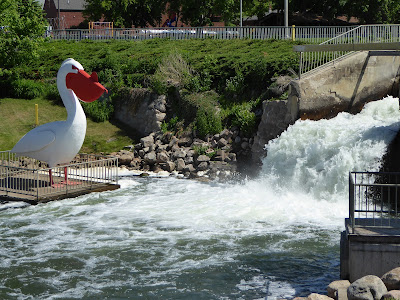 As a primer to our upcoming Ontario adventure they took us out fishing a couple times. We caught tons of fish including largemouth bass, northern, crappies, sunfish, rock bass and walleyes. Probably the most species we have caught in one outing. 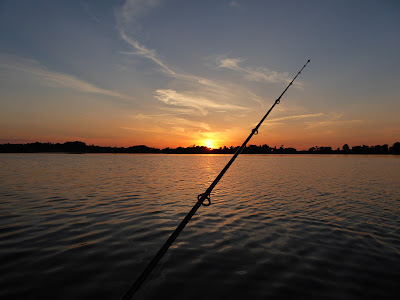 They were in the process of staining their cabin so I offered to help them stain one afternoon in an effort repay them for their generosity. We only did about a 20’ section on one side and it was a great reminder of some of the things we are missing not owning a house and also a reminder to go as maintenance free as possible on our next house!
After 3 nights with them it was time to move on and head to Ontario. The first day we drove 8 hours and spent the night in Grand Portage, MN in the parking lot of the casino. The next morning it was just a short 6 mile drive to the border. 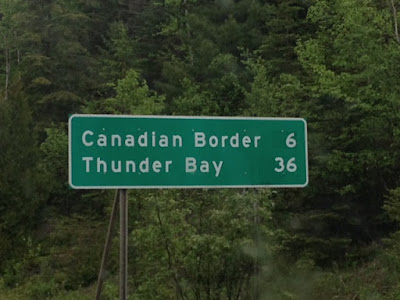 I don’t care how many times you cross the border, there is a certain amount of anxiety that comes with each border crossing. We make sure we have all our paperwork ready (passports, ATV registration and dogs papers) and within reach when we hit the border and we also go through our mental checklist of the questions we think we will be asked so we have the answers ready. We also have a routine that we found successful and when something works we stick with it. Before approaching the check station we remove any hats and sunglasses, we roll down the driver’s side front and back windows and turn off the vehicle when we approach the check station (hanging onto Daisy!) and hand them our passports.


Sometimes they ask more questions but you are almost guaranteed to be asked those. If all goes well you can be on your way in a minute or two at the most. Barb went first and it took an unusually long time so I thought for sure she was going to be pulled over and searched. But after a few minutes I heard the truck start up and she pulled the rig onto the main road and was on her way. Then it was my turn. He said “So you’re the other half?” He asked me the alcohol and firearms question and sent me on my way. Later I asked Barb what took her so long and she said he was just chatty. Talking about the bugs, the weather, the dogs, her work and where she has been. I don’t want to curse our luck but after dozens of border crossings with the rig we have yet to be stopped and searched. Not that we would try to do anything illegal, it is just not worth jeopardizing us coming up here for something stupid like that.
From there it was on to Thunder Bay and through Nipigon. 3 ½ hours later we were pulling into the resort. Our welcoming committee consisted of nobody, nobody at all. It seems all the fishermen were out on the lakes, Michelle was at church and Chad was out on the lakes himself.


They finally arrived home a few hours later and we spent some time getting caught up. The next few days were spent setting up our home for the next few months. The most important aspect of this is trying to get the rig as bug proof as possible. This consists of putting up our screen house and using blue painters tape on the rubber around the slides. In years past we have found these two things keep the majority of the mosquitoes out. 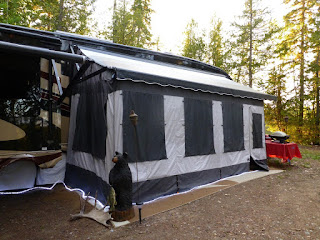 Even with these precautions they still get in by the dozens each day. Our inside arsenal consists of one thing. The tennis racket bug zapper. It is never out of reach when we are sitting inside the rig as sooner or later one will try to attack you.


When we go to bed we close the bedroom door to minimize the areas they can launch their attacks. We then go around the room with the tennis racket zapping any mosquitoes that make themselves visible. The other day after a rainy day we were in the bedroom reading before we turned out the lights and wave after wave of mosquitoes continued to assault us. We have no idea how they were getting in or where they were hiding. It was like they were forming squadrons and coordinating their attacks! I was zapping them with forehand volleys with the racket, backhands and a few moves that don’t even have names. The air smelled like burnt mosquito wings and the bed was littered with carcasses of the fallen soldiers. But their comrades continued their assault. During one particular assault there were three buzzing around my head.  As I was concentrating on one, another one decided to make a kamikaze move and dove right up my nose! Which will explain the tennis racket impression on the tip of my nose tip of my nose. We eventually won the battle and slept somewhat peacefully. Even with all this I would only rate the mosquito level at about a 6 or 7 out of 10 we have definitely seen it worse.
So why would we subject ourselves to such torture? Well besides spending the summer with our friends we come for the fishing and hunting. The fishing up here is the best we have ever encountered and over the summer I hope to write about many fishing adventures. So far we have only gotten out once to one of our favorite lakes. I can’t explain how good it was to launch the boat and motor across the lake, it was like visiting an old friend. And that friend was good to us! We had great fishing catching perch, walleyes and northern pike. There is nothing like the feeling of having your rod bend and finessing a big walleye to the surface.


I know not everyone is real big on hunting but it really helps support many families in the area. The main industries up here are logging, hunting and fishing. Without them it would be difficult if not impossible for the locals to make a living up here. Speaking of hunting, although the bear season does not open until mid-August I have already started to get some of the stands set. We have a VIP bear hunter coming up this year and I want to make sure he has an experience of a lifetime so I have been clearing out a logging road that has not been accessed in years. It is seriously grown over and has lots of downfalls but the hunting should be good back there!
Yup, it is good to be back here….. we will be posting more fishing tales in the following weeks along with our other adventures from the Ontario bush!
Posted by Jim and Barb's RV Adventure at 5:25 AM