Warning…..this post includes photos of dead bears at the very end. (This note is for you Pam)


This past week was one of our favorite weeks we have had since coming up here in June. It was also one of the most stressful….. If you read last week’s post, I introduced the “Bobs” in our lives. Two of those three came up to do a little fishing and bear hunting this past week. It had been months since we have seen either of the Bobs and wanted to show them the best possible time. Barb and I were confident that we could get them on the fish but fulfilling someone’s dream bear hunting trip can be very stressful as the bears are much less predictable and there is so much out of our control.
Brother Bob was the first to arrive on Monday afternoon with Farmer Bob arriving the following morning. Since it was opening day of bear season I was excited to get Farmer out on his stand. I had two areas in mind for him with multiple bears visiting each site. I had set up a ground blind for him in each area for him to sit in and hunt. A ground blind is basically a camouflaged tent with multiple windows around it so the hunter can sit in a chair and have up to a 360 degree view of the surrounding area.


After dropping him off at his site Brother and I returned to camp and anxiously awaited his return. Including Farmer, there were a total of 5 bear hunters out. Two of the other hunters included Kim and Breanne a mother/daughter team from Texas also on their first bear hunt. Since it was Tuesday the rest of the camp was at the fish fry when we heard a car coming down the drive at 6:30. Did Farmer Bob shoot one already? When the vehicle pulled into camp we saw it was not Farmer but Kim who had shot a bear within her first hour on the stand! A half hour later we heard a 4 wheeler coming down the drive. Not Farmer Bob, he was driving a truck…. When this hunter pulled into camp we saw that he had a bear on the back of it. 2 bear for 5 hunters and we were only hours into the season! Certainly Farmer would see something tonight….. Day turned to night and the other 3 hunters returned to camp bearless. Breanne had seen a bear while Farmer and the remaining hunter saw nothing but squirrels and chipmunks. No worries, there are 5 more days to hunt…..
Day two after Farmer went to his blind, the rest of us just relaxed around camp. He pulled into camp after dark and reported another bearless night while Breanne pulled the trigger on a nice bear. Two nights and Bob has not even had the slightest of bear sightings! And here I thought I was the Bear Whisperer setting him up in this great spot. Ugh! The pressure is starting to build!


The next afternoon after getting Farmer out to his stand, Barb, Brother and I went fishing. It ended up being one of our top fishing days of the season fish after fish after fish! 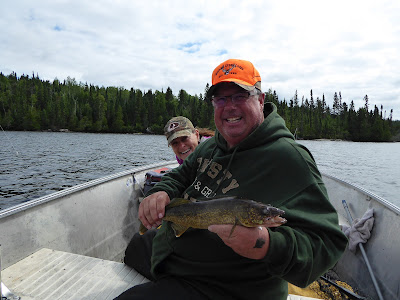 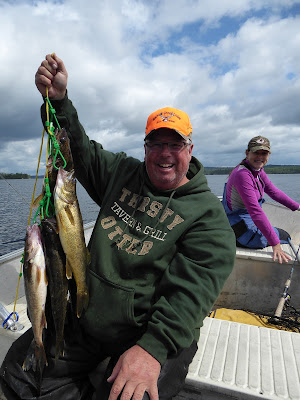 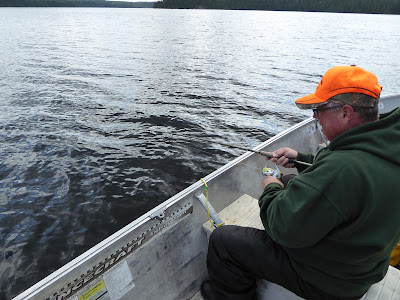 Maybe all this fish activity will translate to active bears in the woods. When Farmer returned that night he reported that he had seen one bear for a few seconds but it was small. Well, at least he saw something!
Day four time to switch it up…. This afternoon we were going to move Farmer to another hunt sight to see if there was more action. Barb, the two Bobs and I went fishing in the morning and brought the 4 wheeler with us to the lake so Farmer could go hunting directly from the lake. We fished the same lake and the same spots as the day before but the fish were not nearly has active. We had a good day but not a great day like the day before. Bob headed to his ground blind around 3:00 as we headed back to camp. Two other hunters arrived in camp and the remaining hunter from the original 5 hunters arrowed a 300+ pound boar. Now Bob was the only hunter from the first group not to get a bear. Now the pressure is really mounting and I am seriously second guessing myself! When he returned that night he was all smiles, he had not gotten a bear but a smaller one entertained him that night by hanging around the area and he was thrilled to get to see a bear in the wild for an extended period. That made me feel a little better, at least he was seeing bear!


Day five….only two nights, left time to close the deal or go home without a bear….Thunder, lightning, hail and rain for most of the afternoon. Other hunters came in early but Bob stuck it out and the evening sit turned out to be perfect. It was almost dark when he said he noticed movement out in the woods. A Bear! After looking it over Bob decided that this is going to be “The bear”. As he was lining up the shot something spooked it and it took off into the bush, so much for that night’s opportunity. To top it off one of the newly arrival hunters tagged a bear. Now the hunters from the second group were getting bear and Bob, with only one day left to hunt had yet to pull the trigger….. If he does not get a bear Barb and I will not be able to show our faces in North Dakota again!
The last night of his hunt we not so patiently await his return. Soon we hear a 4 wheeler coming down the drive but alas it is not Bob, it is another hunter from the second group with a nice boar. Day turns to night and I mentally start altering our fall plans as we can no longer spend our fall in Bob’s farm in North Dakota…..Bob pulls into camp well after dark but instead of going directly to his cabin be pulls up to our trailer and says: “I shot a bear!” He said with only minutes left in the day he saw the tan muzzle of a bear moving through the brush, it was now or never and was able to make a clean shot. High fives and hugs all the way around and we head back out to the bush to recover his bear. It had only gone 20 or so yards after the shot and after a short drag to the 4 wheeler we had it loaded up and were headed back to camp.


We were up until 2:00 skinning and butchering the two bear that came in that night but the excitement level was high.
All in all it was a great week. Great times fishing and visiting with my brother, we don’t get to do that as much as we used to. Barb prepared great meals every day; pancakes, French toast, fish, ribs, blueberry pies and cobblers with lots of ice cream! I think we all gained 5 pounds throughout the week…..


Both Bob’s gone Barb and I relaxed for one afternoon as we had more guests arriving that night. My sister Carol, her son-in-law and grandson were arriving that night for another week of fishing and adventure in the North Country!

Posted by Jim and Barb's RV Adventure at 2:49 PM