Well, the bottom fell out of the weather here in North Dakota. What was crisp cool mornings with mild afternoons turned frigid mornings and downright cold afternoons. This past week, we have not seen highs over the 30’s and the lows have been in the teens. So why have we not left the North Dakota frozen tundra and headed to warmer climates?
Well, three reasons really, 1)This is the best time to deer hunt in this area, 2) my brother Bob has come to visit but the third and probably the driving reason is that Barb is still not back from her hiatus in Pennsylvania and I have no vehicle to move this beast!


Brother Bob came up to do a little duck hunting, visit and get a little taste of “farm life”. Unfortunately the weather really put a damper on the duck hunting. Within a matter of hours overnight all but the largest bodies of water froze solid and the ducks, apparently being smarter than us, moved south. We did get out once breaking ice, setting decoys and waited for the birds. As dawn broke ducks would fly over, look down and see some of their brethren frozen in what looked like a solid block of ice while others saw an opportunity find some open water. Although we had a good hunt the funniest part was watching the ducks landing on what they thought was open water. The landings were gentle but then they would skid and slide across the ice looking somewhat confused when they came to a stop.
They also put brother Bob to work burning a few bales of cattails from sloughs that had gone dry due to the drought this summer.

He left the day before Barb was to arrive home from her trip in Pennsylvania. She sent me a few pictures to show me how much fun they were having!

I in the meantime went to work cleaning the rig. Over the past two weeks it became painfully apparent that Barb is the glue that holds everything together around here. I had done laundry several times while she was gone so now I needed to transfer all my clothes from my temporary closet/dresser (aka, her side of the bed) to the real closet and dresser. It had been a few days since I did laundry so I was not sure what was clean, what was dirty, it was all kinda intermixed so I have to resort to……..the smell test. This is an effective but not recommended way to determine what is clean and what is dirty. In the future I need to remember to maintain separate piles.
On the farm side it has been a busy couple of weeks! I attended the Ward County Farmers Union annual meeting with Bob, Deanne and Holly. (Bob is the president) I went mainly for the free meal but was pleasantly surprised when my name was drawn for one of the door prizes. A $25 gift certificate to Cenex! When I raised my hand with the winning ticket I know everyone in the room was wondering “Who is this guy?”.

I also attended the annual steak fry at the Max Civic Club. This is the third year in a row that we have attended this event and everyone knows everyone. (Except for me and my brother Bob) When  you walk in you have to write down your name and how you would like your steak then they bring it to you when it is done. Every year we have to write "with the Finkens" on our piece of paper otherwise we would never get our food!
I also got to drive one of the tractors from Minot back to the farm. A rocker arm had blown out a couple of weeks ago (I won’t tell you who was driving it at the time) and it had to be trucked in for repairs. The dealer charges over $500 to truck it back to the farm so instead I drove it the two hours (at 20mph) from Minot to the farm. Kinda weird as you have to go right through the heart of Minot and the rest of the way is on the key artery into town. But I figured I was bigger than everyone else and they would move out of the way.
Speaking of farm life, one of the main crops here is Canola. An interesting little plant. Growing up I had never really heard of Canola and for good reason. It did not exist until 1978 when it was invented to describe an oilseed that was selectively bred from rapeseed.

With seeds about the size of poppy seeds, there are several uses for Canola but the most well know is cooking oil. The seeds are crushed and the oil is extracted and ultimately it makes it way into the cooking oil bottles. Imagine how many seeds it takes to fill one bottle and multiple that times the world wide demand. That is a lot of those little seeds being crushed!

One of the things that makes this crop so appealing to farmers in this area is the fact that there is a processing plant in nearby Velva North Dakota. So while other farmers may drive several hours to get to this facility, the Finken's have a relatively short drive.
Along with the cold came….. you guessed it snow. Less than an inch but snow nonetheless. We were hoping to avoid the white stuff and be long gone before it arrived. I did some final harrowing on the day it snowed as that was probably the last day they will be able to work the fields until the spring thaw. 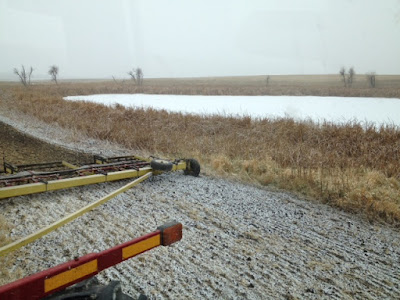 The snow geese also arrived. In the tens of thousands. This picture does not do it justice but almost every field was covered with geese.
Despite the cold, the wind and the snow I went out deer hunting each of the last 6 days but unfortunately no shooter bucks presented themselves so we are going home venison-less. Luckily we received a call from the butcher in Rapid City that our South Dakota deer is ready for pickup!

But alas, all good things must come to an end. Barb arrived home safely after a 16 hour travel day and was greeted by getting hugged,  mauled and licks to the face (you’ll guess who did what). She looked around the rig and said “Oh my”….. I knew my cleaning was not up to her standards but you have to give a guy credit for trying!
Now we are off to our property in South Dakota where we plan to stay as long as the weather will allow us. I would tell all our RV friends to stop by and see us but most of them have had the common sense to head to warmer climates and are in a land far far away……