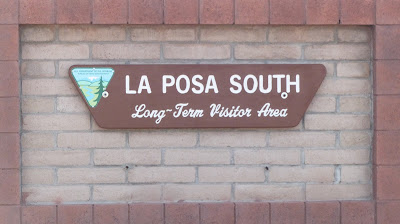 La Posa South LTVA (Long Term Visitor Area) in Quartzsite is going to be our home for the next month and we were anxious to find a spot to call our own. We were a month later in arriving than we were last year and with “The Show” starting in just two days the place pretty full already. Luckily, we had a couple of secret agents keeping an eye out for open sites and a site was opening up where a lot of our friends were the day we happened to be arriving. So with tables and chairs at the ready Vicki and Harry as well as Deb and Steve watched the occupants packing up and as soon as they pulled out they sprinted over and placed their furniture in the vacated spot in the hopes that it would still be available when we got there. As luck would have it we pulled in within 15 minutes of the old tenants leaving and we were able to slide right in!
And what a great spot it is, as we are within 100 yards of not only Vicki, Harry, Deb and Steve, we were also within 100 yards of Steve and Dianne, Jim and Brenda (our South Dakota neighbors), Jerry and Linda, Red and Pam as well as Cindi and Roger! 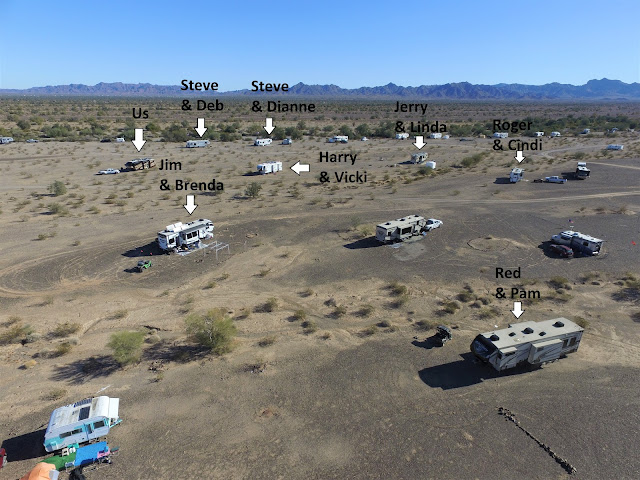 Once we got settled we wandered over to Steve and Dianne’s for happy hour (we did not waste any time!) It is good to see our Quartzsite friends again! Les and Sue even made a guest appearance on their way by!

The next night Dianne made a huge pot of chili and we had another late night around the fire. As we sat around the fire talking smart we made plans to attend the RC plane swap meet at the airfield the next day after Red had breakfast. The next thing Pam knew most of us had invited ourselves over to their place the next morning for biscuits and gravy before heading out.

There were a lot of cool planes at the swap meet but none of us ended up buying anything. 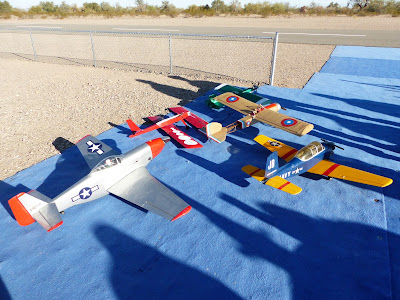 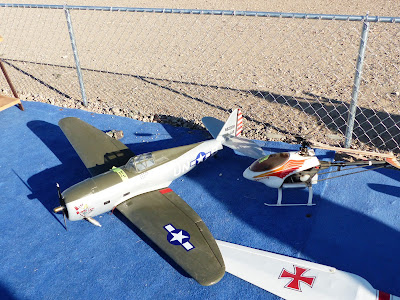 There has been a lot of speculation on how the LTVA’s would be impacted by the government shutdown. Would they turn off the water? Would they close the dump stations? Would they make everyone leave? The answer questions were yes, well maybe and I don't know. The first thing we noticed is that the offices were closed and no one was being checked in and no permits were being issued. As a result people were coming in for free. There was also a notice posted saying the area was closed, you could stay, but all services were going to be turned off. No water, no dump stations and no garbage service. Everyone was panicking, rushing to the water and dump stations for one last time before they were shut down. Ourselves included. The day that the services were scheduled to close the government struck a deal and reopened so in the end only the garbage pickup was turned off for a couple days....


Even though the government may have shut down, the socializing did not. One evening we traveled over to Plomosa Road to visit friends Dave and Maxine along with Tracey and DeLano. We had met both of them a couple of years ago while doing the road mapping job. Although we have seen Dave and Maxine a couple times since then, we have not seen Tracey and Delano in a couple years. It was great catching up with them and meeting Tracey and DeLano's bird Petri.

The next night Pam hosted a "Hobo Soup Night" with many of our LaPosa South friends. Everyone brought a soup ingredient and dumped it into a large pot. Some brought meat, some brought corn, others brought onions, tomatoes, celery.... a literal potpourri of ingredients. Although everyone raved about how good it was, I am not that adventurous and stuck to my cheese and crackers.

It was our largest gathering so far this season with about almost 30 people in attendance. Al and Donna Ferguson stopped by for a bit and Faye and Dave have now joined our little community for a few days. We have been following each others blogs for years and this is only our second time getting together since meeting them in Alaska in 2015. 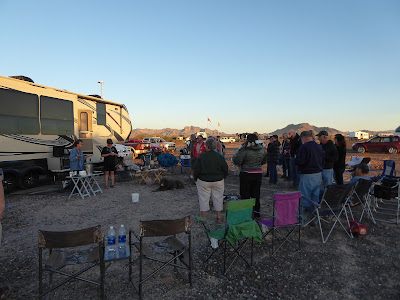 Once the sun went down Barb and I snuck away to walk the dogs and get some beauty rest as the next day we were up bright and early for a day trip to Mexico with Harry! Wait, weren't we just in Mexico last week? Why, yes we were but Harry needed to make a quick trip down to see the dentist so we asked if they had room for two more.

This trip Barb wanted to see about getting new lens for her sunglasses. She had been quoted over $400 for just the new lens from her optometrist here in the states. She went to Best Optical in Los Algodones where they did an eye exam and she got new lens for $79. We are curious how well these hold up compared to her old lens but the over $300 savings is substantial.
While we were there we ate at a small restaurant with great shrimp tacos. We would highly recommend it if you are down there.
When we got home, Rick and Kathy Rousseau stopped by for a visit. Apparently they had tried to find our rig the day before and ended up in the nudie section. I am not sure if Rick was really looking for our rig or just an excuse to explore that area.

As if we did not have enough activity for the week, Thursday night we saw Steve and Dianne outside their rig so we walked over to say hi. Soon Harry and Vicki walked over then Steve and Deb. Somehow we got to talking about different types of booze and next thing we knew there were about a dozen booze bottles gathered around the group and we had in impromptu booze tasting. Big mistake! I would tell you that the night ended with me guiding Barb back to the rig where she spent the night on the floor with half her body in the bathroom and half in the hallway but she probably would get mad at me so I won't tell you that.

About 2:00am I woke up and was very hungry and realized that we had not had dinner. Do I risk getting out of bed and stepping over her in the hallway? Would she bite my ankle as I went by? I instead decide to tough it out a few more hours until breakfast. At 2:30 she woke up and climbed into bed. Would now be a good time to ask what's for dinner? As I played several scenarios of asking this question through my mind none of them ended with me getting something to eat so I opted to say nothing. As soon as she was asleep I crept out of bed and got some crackers, huddled in a corner and quietly ate them while keeping one eye on the bedroom door. She was very, very slow the next morning and actually throughout the day. I did what I could to make her feel comfortable but for the most part I just kept my distance as I learned long ago not to poke a cranky bear.
Friday night Steve and Dianne had a get together to welcome their Canadian friends Dave and Leslie. They are from Alberta and have been following our blog for quite a while. Many of the usual suspects were in attendance, all told there were over 20 people there including Jim and Cec from British Columbia who also parked in the area and have been following our blog. It was great getting to know all of them a little better. 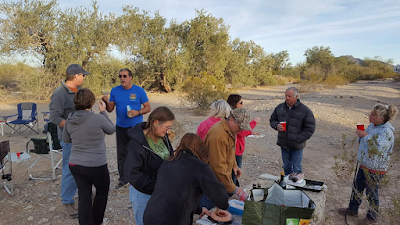 Barb was still not feeling well so we called it a night quite early and got her to bed.

Week One is in the books here in Q. I don't know how it could have been much busier but I think we are about to find out as today Barb is headed to Phoenix to pick up our daughter Jessica and our grandchildren Dylan (8) and Kendall aka Baby K, aka Special K (3) who is coming to visit for a week in the desert.

Posted by Jim and Barb's RV Adventure at 9:37 AM