A Week of Firsts


It was a week of firsts for Barb and I up here at the farm and one of the more physically exhausting weeks I have had in quite a while. With the weather cooperating all week we were able to work outside and get a lot of work done.
Our first first of the week was cleaning seed. Who knew that harvested seeds have to be cleaned before you can use them in the next years planting? This week we cleaned both wheat and soy beans. Makes sense if you think about it but who ever thinks about it? Farmers that’s who!
For example when soy beans and wheat are harvested they have to be removed from their hulls. The majority of them are discarded by the combining process but some make their way into the hopper and eventually into the grain bin.
Speaking of hoppers, there are hoppers of a totally different kind that are a problem when it comes to cleaning beans. Grasshoppers. They are everywhere! They too get sucked up into the combine (along with lady bugs and other insects) and some make it into the grain bins. Last but not least is weed seeds. Although they control their weeds there are enough that survive to make them a problem. Scoop up a handful of beans and you don’t see them but if you look very carefully you might find a few seeds and the last thing you want to do it plant lady bugs or weeds along with your soy beans!
So how do you clean soy beans? Certainly not individually with Barb’s toothbrush! They have a huge grain and seed cleaner that uses air and screens to weed (pun intended) the bad seeds and other debris. Follow closely as this is quite the process!
First we took the beans out of the bin they are stored in.
Then we moved them over to a lift truck and dumped them into the box. You have to really control the flow going into the cleaner so it is important to have the opening just right. That then dumps into a conveyer and up the auger into the hopper of the cleaner.
The cleaner has a series chambers that you can control the air flow and bounces/floats the seeds across the chambers and separates some of the debris based on its density. Anything lighter and heavier than the soy bean gets separated.  It then moves onto a series of screens where anything larger or smaller than the beans are screened out and separated as well.
The debris, split seeds or smaller seeds go one way and the desirable seeds go another. If I were to guess I would say 10% or less of the load goes down the undesirable conveyer while the good seed follows another conveyer and up an auger into another grain bin.
Simple right? Well setting it up is quite the process and takes an hour or more. Setting the air flow for density is an art in itself and once you get started you don’t want to stop until the entire bin you are working is empty and at a cleaning rate of ~400 bushels/hour and a 4000 bushel bin to clean, we were in for the long haul. A process that started at 9:00am with set up ended at 11:45pm when we finally turned off the cleaner (this did not include the 1 ½ hours of cleanup and tear down the next day).

Here is a sample of the two end products;


I realize that this was a lot of detail on something most of us never knew ever even existed but hopefully you found it as interesting as I did.
The other first this week was Barb attending a Lefse making class. I am always looking for new and delicious foods for Barb to make me so when I saw this lefse class on line in Minot I knew we had a winner! Well, maybe it didn’t happen quite that way but Barb did attend this class last week with her friend Jeanie.
I won't go into great detail on how they make lefse but one thing I did not know is that they are made out of potatoes. The other thing I will tell you is that they were delicious! 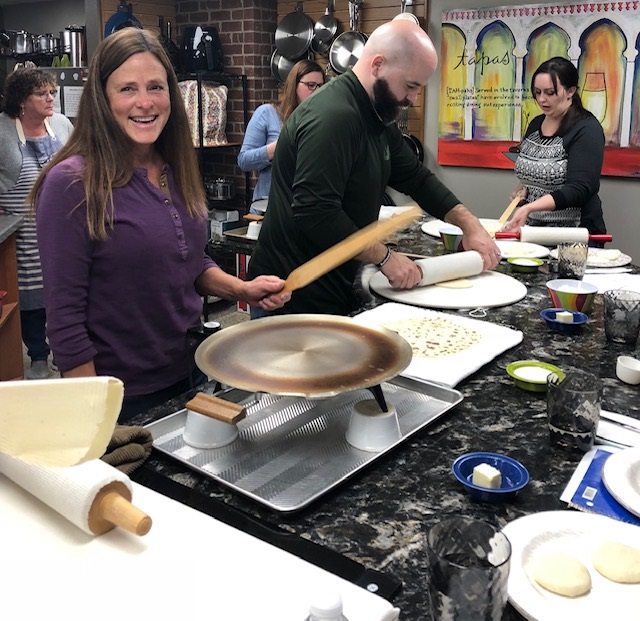 The another first for the week was Dylan being nominated the FFA (Future Famers of America) National Star Farmer Award. One of 4 finalists from across the country, Dylan, DeAnne and Bob flew Indiana to attend the national convention in Indiana. Dylan did a great job and made his family proud, here is a link to his video.

Last but not least was the first time (and last) I was volunteered to wash dishes at the annual Max Civic Club Steak Fry. Notice I said "volunteered". Actually Holly volunteered but since she is now 6 months pregnant she cannot stand on her feet that long and in turn volunteered me. (She should have thought of this 6 months ago!) 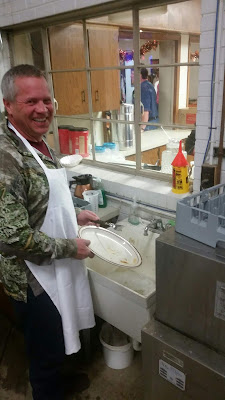 Barb said now that I have done dishes professionally I should be able to do them at home. Unfortunately none of the skills I learned at the steak fry were transferable to life in the rig!

This is our 4th straight year attending the steak fry and we always have a great time. We usually end up at the Max bar doing pull tabs afterwards but last year after losing our @sses for two straight years we vowed we would not do it again, instead opting to stay at the event and play black jack. So true to our word we played black jack for an hour and a half and …..lost everything. So what did we do next? We went to the Max bar and starting in on the pull tabs! But this time we won!


Weather permitting, we have 11 days left here. Although there is snow in the forecast it looks like the temperatures are going to be mild and we are going to make it!
Posted by Jim and Barb's RV Adventure at 8:10 AM