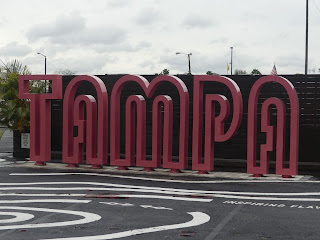 Lithia Springs State Park
Leaving Yankeetown we had no idea where we were going. This was a first for us. I mean who leaves a campground without knowing their next destination? We knew where wanted to be; Lithia Springs State Park but it is a first come first serve park and was full. We had an ace in the hole though, actually two of them as we had two sets of friends (Bill and Kelly and David and Sharon) staying at the park that were looking for openings for us so we headed that way in the hopes something would open up.

In the meantime Barb was making phone calls trying to find a spot within the area. A couple hours later it became evident that we were out of luck and pulled into Sumter Oaks RV Park in Bushnell, paid our $13 for dry camping and got all set up. It was about then that we received a message from Kelly that someone had left and that she had snagged us a site! With that we packed up and were on the road again!

We arrived at Lithia Springs an hour later and were set up in our new spot. Thanks Kelly! The only downside is that Kelly is so young she had to pay the full rate of $24 for the night and not the reduced 55 and over rate of $18. We need to get older friends! That night we got together with Bill and Kelly and finally got to meet David and Sharon, fellow RV’ers who were working in the park. We had been following each other’s blogs for years and although we felt we had known each other the entire time we had yet to meet in person. They were just as cool as we imagined and we hit it off right away. 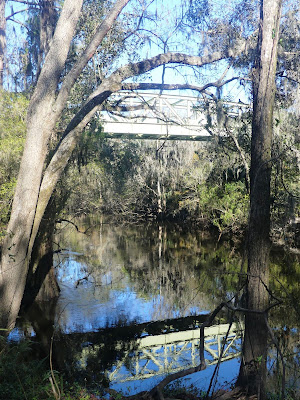 The next day Kelly had organized an RV Dreamers get together for anyone in the area. Over 20 couples attended including good friends Jim and Diana who had visited us in South Dakota last year. We also got to finally meet Gene and Eileen and several other great couples. Once again, thanks Kelly! 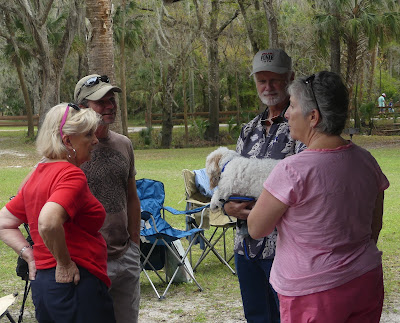 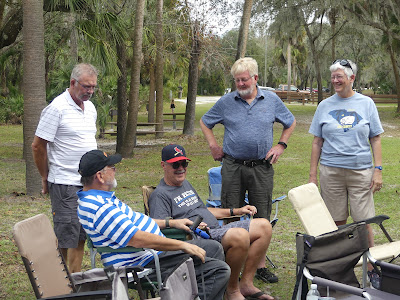 Monday was another big day for us as we were headed up to Tampa to visit Dino and Lisa who were working at the state fair!  Arriving, we parked the truck, paid the 55 and older entry fee of $9 and went in search of Dino and Lisa’s rig among all the other carnie rigs. We knew we were in the right spot when we found this!
Dino had to work but we were able to walk the fair with Lisa then we went back to their rig and I drank all Dino’s beer while waiting for him to get off work. 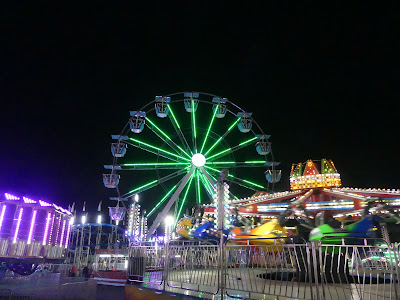 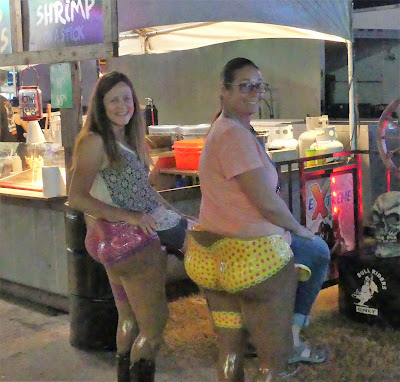 Tarpon Springs
Tuesday Dino and Lisa had the day off so they drove down and took us to Tarpon Springs. This area is known for its sponges and Greek culture. Very interesting town, a bit touristy but interesting nonetheless. 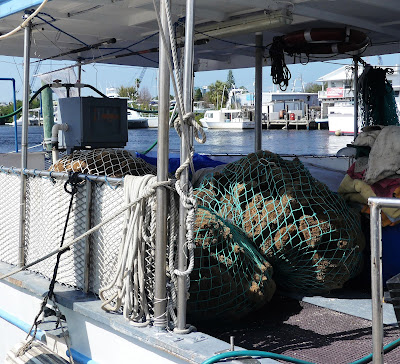 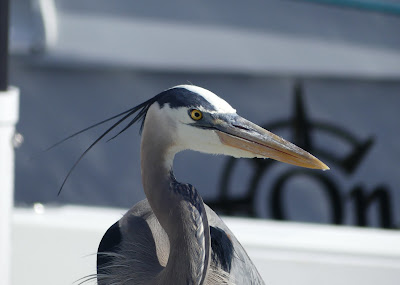 We had lunch at Hella’s. Gyros of course, they were delicious! We also stopped by one of the many tourist shops and bought a sponge. 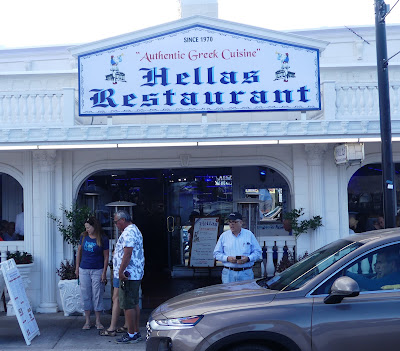 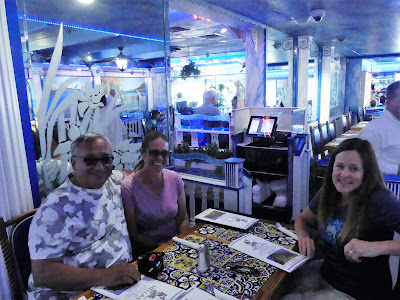 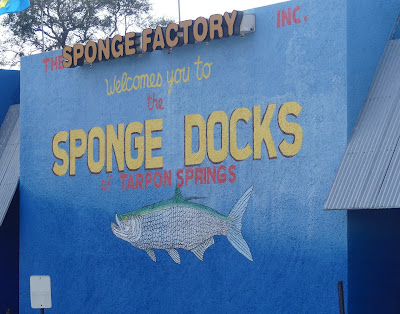 Exhausted from our busy day we headed back to our place for a night of burgers and beer.


A Day in Ybor City!
The next day we were off to Ybor City! Barb and I think we are the only ones pronouncing it correctly as “why-bor”, while everyone else pronounced it as “e-bor”. I mean it has a Y not an E at the beginning so why would you even think it is pronounced “e-bor”? We met Dino and Lisa at the Ikea parking lot and jumped in with them for a tour. Although it was cool and rainy we made the most of the day. This town is known for its Cuban culture.  First stop was Cuba. Did you know that a piece of the U.S. was deeded over to Cuba in 1956?
Just a couple blocks down the road is La Segunda Central Bakery famous throughout the city for having the best baked goods. It was very crowded but worth the wait as each of us  got a pastry for the next day.
Then it was on to lunch at the Columbia restaurant. On the way there we passed what seemed like dozens of cigar shops. Ybor is also known as Cigar City and now we know why!
Living life on the edge Barb and I had the 1905 salad and a Cuban sandwich.  The restaurant was very busy, the atmosphere and food was excellent. 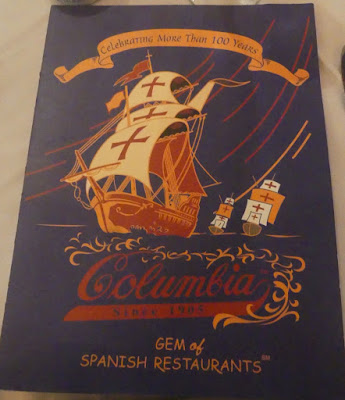 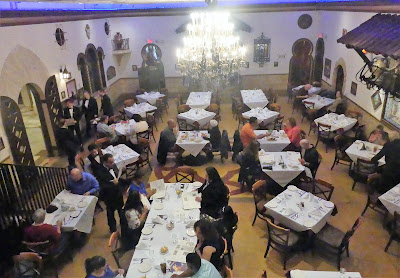 Two cool things about the city is that they have chickens loose throughout the city and a streetcar system that connect Ybor to Tampa and as a bonus it was free the month of February! 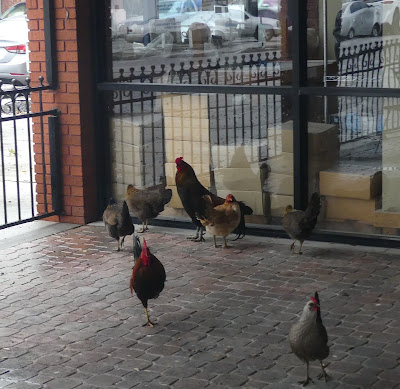 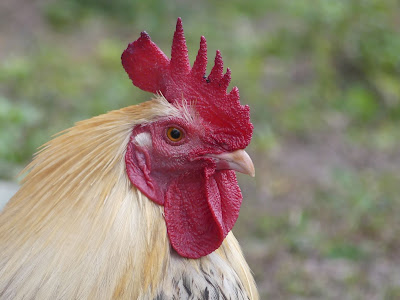 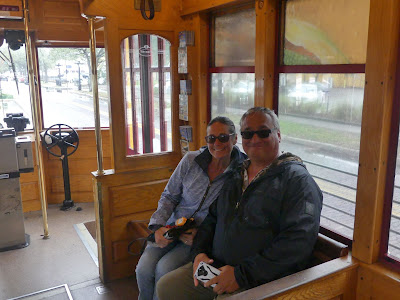 We rode the streetcar to the end of the line in Tampa and walked the Riverwalk. Certainly not as nice as San Antonio Riverwalk but still nice. 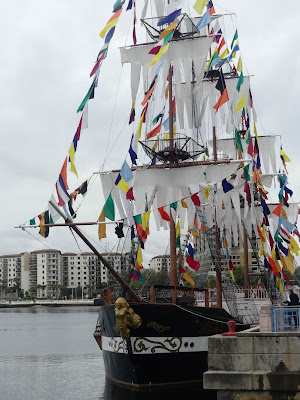 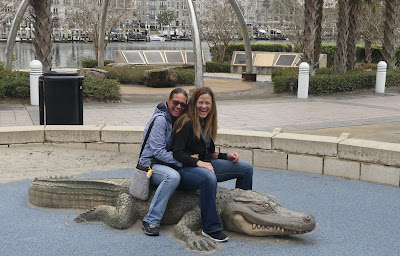 Riding the streetcar back into Ybor we made our way to The Tampa Bay Rum Company where we had a tour and a tasting of several varieties of their rum. 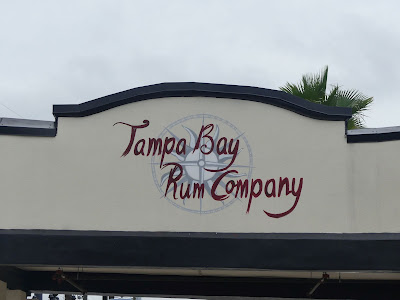 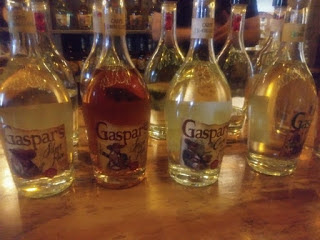 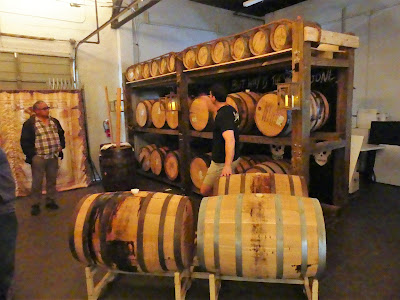 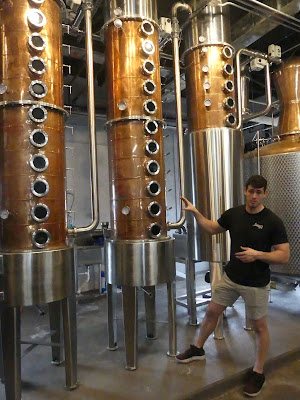 Returning to Ikea to retreive our truck, what do we see across the street? A brewery! Taking it as a sign from above we knew we had better stop in for a flight! 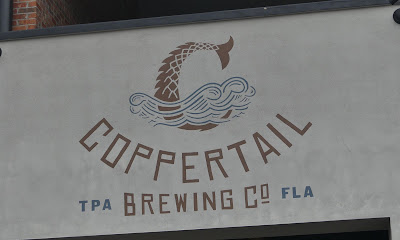 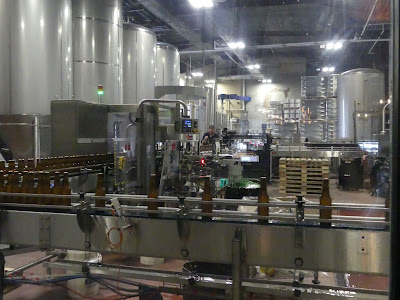 If that was not enough, we ended the day with a fire and BBQ back at our place and this time we were joined by David and Sharon. It was great to sit down with them in this small setting and get to know them better. Hopefully we will run into each other more in the future! 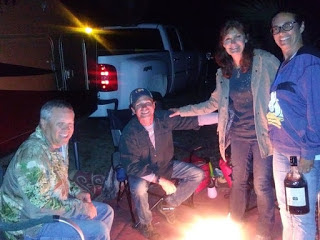 That brings us to the end of a very busy few days in the area. Next up is Fort Myers where we will be visiting my sister which promises be as equally as busy!
Posted by Jim and Barb's RV Adventure at 8:26 AM