After 10 days of not being able to get up on the roof due to wind, rain and snow we FINALLY got back up there this week and after 3 days we got one side completely roofed and underlayment in place with the other side about ½ way done.

It is quite the process. We have to load the pieces of ½” OSB onto the skidsteer basket 6 at a time. 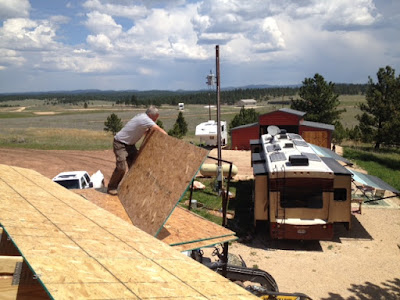 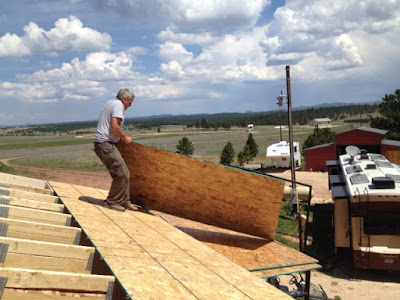 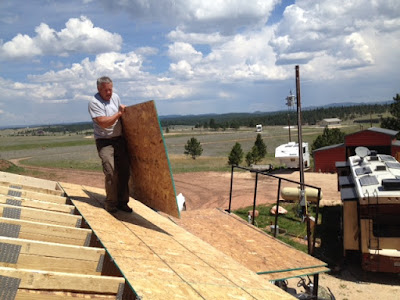 Although we are 16' above the ground, it is not too bad unless the wind picks up when you are carrying a sheet.

Sheet after sheet put into place in a staggered formation for maximum strength. The roof will have about 100 sheets of 4’x8’ OSB when all is said and done. Add the 110 sheets of 7/16” OSB on the sidewalls and that is a lot of sheets of OSB we had to lug into place!
Guy, who apparently is a glutton for punishment came back for another day of fun. We spent a few hours putting the sheathing on the front of the garage.

Speaking of the garage, Kevin sent me detailed instructions on how to install the overlook above the garage gable to dress up the front of the building a little bit. Being such a large building with two huge overhead doors anything will help. But between the overlook, wood timbers around the overhead doors and the covered porch on the side we think it will look pretty good when all is said and done.
It is hard to believe that just 9 weeks ago this building site was a bare slab and piles of lumber and trusses. Now we can see the light at the end of the tunnel.  Oh we are not done by a long shot, not even close, but we are close to meeting our goal for the year. Getting the building weather tight. Something that is desperately needed during this wet and snowy spring!
We cannot help but wonder how building this house will change our travel plans going forward. We don't want it to but it undoubtably will. We love the area, we love our property and we are putting heart and soul into our house but we also love to travel. If I were to plan our perfect year it would go something like this... January/February in Arizona, Texas or some other warm weather climate, March in Oregon visiting our son and family, April, May and June back here in South Dakota with side trips to North Dakota or other local destinations, July and August up in Canada and a visit to our daughter in Pennsylvania then back here for September, October, November and December again with side trips to North Dakota and other areas within a days drive. Bottom line is that we don't want the house to consume all our time, which is why were are already planning a trip to Alaska next summer to get us out of the area and take a break from building.

But those are problems for another time, things to ponder on now and worry about later......

For fun this week we went to a Hunting Retriever Club (HRC) event put on by the Mount Rushmore HRC. A friend of ours from Minnesota drove out with his family so their dogs could compete in the event. We usually only see Chad once a year up at Pasha Lake where he likes to hang out during bear season and we had never met his wife Jennifer and daughters Mackenzie and Jessika.

The hunt trials score the dog and the handler as a team while retrieving downed ducks. The handler and the dog are stationed next to each other and a dead duck is launched out of a hidden huge slingshot while the "hunter" shoots blanks simulating a real hunting situation.

The dog is then released to retrieve the bird. The dog is scored on how well it listens and retrieves and the handler is scored on how much direction they have to give the dog. Throughout the day the dogs get 4 retrieves, two on water and two on land.

Both dogs did great and successfully completed each of their retrieves, Eva even graduated to the next level! It was a very interesting event. Now Barb is looking into joining with Dakota! I think I just lost my hunting dog......

After the event they came over to our place for burgers and beers (for the adults). It was great seeing with Chad and meeting the rest of the family, hope to see them later this year up in Ontario!
Next week we have some special visitors coming, we hope to have the entire roof done, house wrapped and maybe put in some windows!!!!
Posted by Jim and Barb's RV Adventure at 9:08 PM