8 Days in the Life of a Barndominium Build

This week we are taking a break from our build to help our good friends Kevin and Cheryl with their own project. After three months of not being able to do any substantial work on their barndominium Kevin and Cheryl returned this past Saturday to hit it hard. If you want to catch up with the first three weeks of their build, check out these two posts: Jim and Barb Build a House! and The Barndominium Build Continues!

We had left their place looking like this in late March...…..all the walls were framed some of the trusses up but only about 1/3rd. 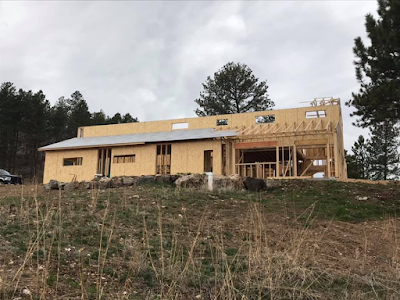 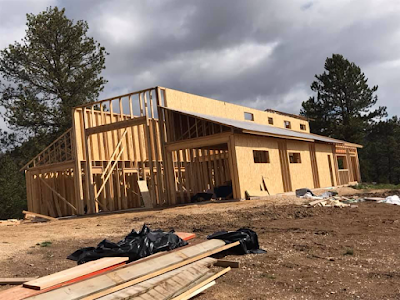 What a change three months makes! In early March the temps were anywhere from the teens to the 40's, our first day of work on his place this week was in the mid 90's. I will tell you right now if given the choice, I would much rather work in the 30's than the 90's!

This trip, in addition to Kevin, Cheryl, Barb and I there is another addition to the build crew. Kevin's friend Earl from Wisconsin joined us. Earl has a lot of building experience so he was a great addition to the team!

Day 1 found us putting trusses on the west wing of the house...…

Then it was time to finish the east side. As you can see from the first picture in this post, we only got about 2/3rds of the east wing done before we had to call it quits in March. We were so busy working we did not get a lot of "action" pictures but we got some pictures of the results at the end of the day.

Next up were the trusses in the center of the house. We used the boom on the skidsteer to lift them into place where Earl and I nail them tight. Once that was done Barb and I got busy doing the underlayment while Kevin and Earl worked on the chimney on the other side of the house. 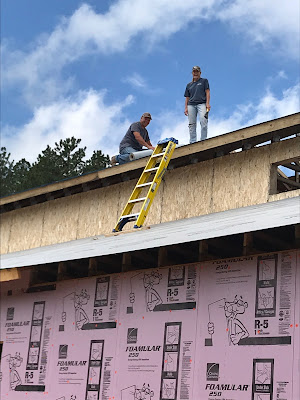 We also put an addition layer of 1" foam around three sides of the house for additional insulation, the final step (for now) was to put the house wrap around the whole thing.

As fast as we could get a side foamed and wrapped Kevin was throwing windows in!


We had to get the fireplace in before the house was entirely closed up as it was so heavy we used the skidsteer to get it in. We had a little fun with Cheryl by putting a boars head above the fireplace in the bedroom.....
By the end of the 8 days we had the entire house wrapped, the roof on and water tight and all the windows in! 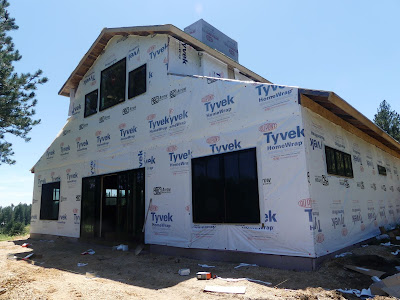 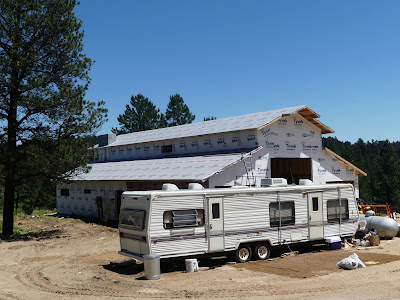 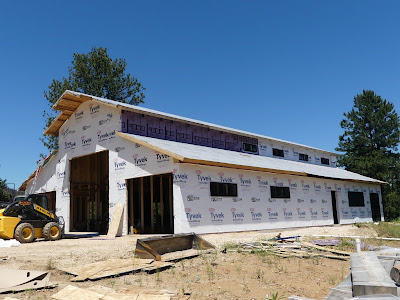 Now their house is basically in the same stage as ours. The big difference is it took Barb and I ten weeks to get to this stage, at Kevin and Cheryl's place we are there in 4 weeks of work.

Kevin and Cheryl brought their new jeep as well so on the 4th of July we called it quits early (like 4:00) and went for a jeep ride..... 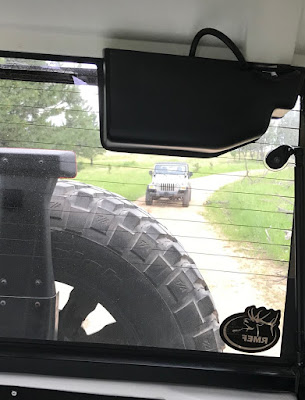 On their final evening here we had a steak fry at our place. We were joined by Jim and Brenda as well as Dan and Bonnie. We were so busy chatting it up that no one took any pictures! Progress on our place was pretty much at standstill this week with the exception on one door, one very big door..... When everyone was over for that evening we put in the 12' slider on the south end.....

All was not sunshine and roses during the week. It rained practically every day. Luckily the rain cycle was late in the day and was after we quit work. We also had tornado warnings two days in a row and one of the local weather watchers caught this picture and posted it on Facebook. That is a little too close for comfort! 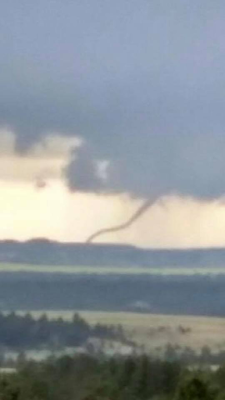 One might think that after such an intense week we would sit back and recover a few days but such is not the case. Our son Forrest arrives on Wednesday to wire the house and Barb and I have one more interior wall to get up before he gets here!
Posted by Jim and Barb's RV Adventure at 5:42 AM