After thinking it through we decided to leave the 5th wheel in the garage and live in it while we were here. The 5th wheel seemed HUGE after being in the camper for so long.

After getting all settled in Barb set about doing a deep cleaning on the camper. Pulled everything out and spent two days cleaning. I in the meantime putzed in the house. We had one big project planned while we were here but not until Kevin and Cheryl arrived in a week or so.

Instead I worked on installing outlets and light switches. Every time I hook one up and flip the breaker it was like a mini victory when it worked. Forrest did a great wiring everything. I had to call him for a lifeline a couple times as I had no idea how to do 4 way switches and could not remember which switch to use as power for a couple of the lights. I am happy to report that all the lights and outlets worked just like they were supposed to! 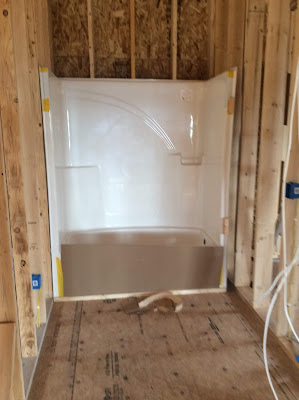 The next delivery was more of an arrival. Dino and Lisa arrived for a visit! We had not seen them in quite a while and it was great to spend some time with them.
We did not do a lot of touristy activities but instead mostly hung out talked, laughed and did chores. Well, mostly they just watched me work. One day Dino and I were preparing to go somewhere and I jumped in the truck, started it up and it died. Just died, would not start not matter what we did. It seemed like it was not getting any fuel so the next day I decided to see if it was the fuel filter. After Dino watched me change the filter and prime it we were back up and running! Dodged that bullet, I hate truck problems!

Our next delivery was the metal for our roofing. I had been working with the metal company for over two months to make sure it was delivered on time and although they were a day late, it was nice to have it on the property awaiting Kevin and Cheryl’s arrival in a few days.
They had a really interesting three wheel forklift deliver the steel. He asked where I wanted them. I told him I wanted them in the garage but at 18' wide they would never fit through the doors. "No problem" he said as he pushed a couple of buttons and the wheels turned sideways.
It reminded me of a crab on the beach, going forward one second, sideways the next! He fit them into the garage with no problem at all! 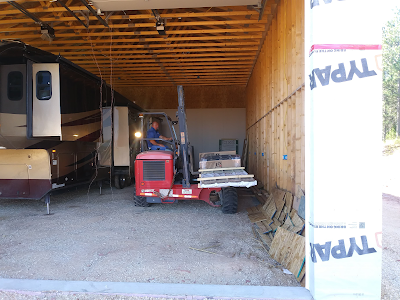 We then went to Rapid City to pick up the (4) 8”x8”x18’ timbers we had ordered a couple of months ago. These are going to be accent timbers in our livingroom. I had a hard time finding a place to cut them. The first place could not cut 18’ers. The second place wanted $500 per timber. The third place said no problem but it might take a few months to source the right logs. They were a steal at just over $100 per timber!
As exciting as all those deliveries are, the next one was the most exciting! Barb wanted a new toy and had ordered a 2019 Polaris Ranger 1000XP! Unbeknownst to Barb I had been whispering in her ear while she was sleeping…..“You want a new 2019 Ranger 1000 XP and a Vortex Razor HD 27 60x85 spotting scope”, …..“You want a new 2019 Ranger 1000 XP and a Vortex Razor HD 27 60x85 spotting scope” over and over again. Then one day she woke up are said “I think we should get a 2019 Ranger 1000 XP”. I said “And a Vortex Razor HD 27 60x85 spotting scope?” She said “No, just a Ranger, you would probably look at the sun with a spotting scope and burn your eye out”. Funny, that is the same thing Santa said to me at the mall last year before pushing me down the slide with his foot. Oh well, 1 out of 2 is not bad!
So with the arrival of the new Ranger the 4 of us were off for our inaugural adventure! We set off down the driveway and immediately knew something was not right. It would not power up over 15 miles an hour….. No matter what we tried it just had no power. Frustrating! So we turned around headed back to the house and Barb called up the dealer ready to give them an earful. If you have never experienced the “Wrath of Barb” consider yourself lucky.  Well, she was going to give it to our salesman with both barrels. Dino, Lisa and I hid around the corner as she made the phone call. We listened intently but did not hear any expected cussing usually associated with the “Wrath of Barb”. She returned a few minutes later and said “It won’t go over 15mph unless you have your seatbelt on”……. Seatbelts fastened, we were off again! 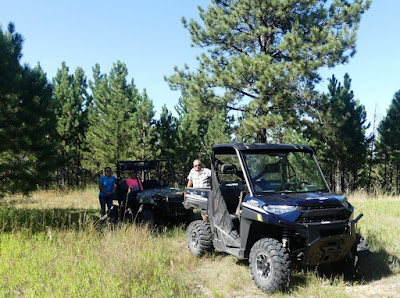 Dino and Lisa left on a Saturday and two days later my sister Carol arrived for a 5 day visit! We had a great time catching up. She read and chatted while we worked on more house chores. We got out on a few adventures as well, including another 4 wheeler ride and a tour around Custer State Park where we saw lots of buffalo and the donkeys!

Coincidently, Carol’s daughter Stephanie had planned a vacation with her 5 kids to the Black Hills this same week. Leaving her husband at home Steph thought it would be fun to load up the van, two tents and 5 kids and hit the road for 3 weeks. Since they are home schooled it more like a long fieldtrip! I bet the campers at Custer State Park thought they were safe camping after Labor Day with all the kids back in school when a van pulls up and 5 kids ranging from 6 to 17 piled out and start setting up tents!
They came over one afternoon for a visit. Barb and I had not seen Steph for about 6 years so it was like meeting all the kids over again.  After a week here they are headed to Yellowstone to terrorize the campers there! Actually, they are very well behaved and cute kids.

Barb and Cheryl were on the ground and stood up the 18' panels to Kevin who was standing in the skidsteer basket 16 feet in the air.


Kevin would then pass the sheets one end of the sheet off to me, we would put them in place and start screwing them down. 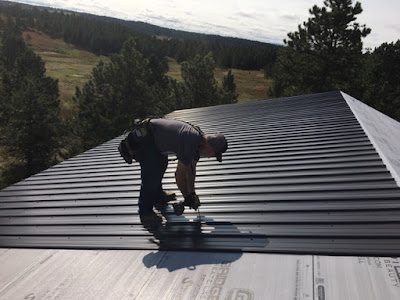 8 hours later we were tired and sore but we had all the panels up!

The next day we finished one gable end and installed the roof vent. That is enough for now....
Work done, we were ready for our next adventure. We spent Tuesday packing up the camper and enclosed trailer. But I had a surprise when I went to check my trail cameras one last time before we left.

Upon seeing that everything stopped and I went out hunting! 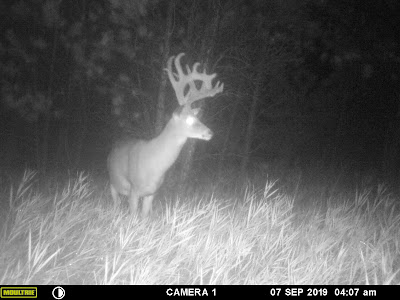 I did not see him that night. I hope he sticks around as he is on public land and we will not be back to see him for a while!

Wednesday morning we finished packing up and hit the road. We are headed west for a few weeks in Oregon where we will stay at Forrest's and where our daughter and family will be flying out to visit for a week!

Posted by Jim and Barb's RV Adventure at 6:11 AM