Sunday morning we pulled the 5th wheel out of the garage, backed it up to the ATV trailer and our train was ready to was ready to hit the road!

We did not know how long we were with both trailers so we measured it up at a whopping 76' 6"s. A little longer than anticipated. A quick check of the state laws in South Dakota, Wyoming, Utah, Nevada and Arizona found we would be legal in only 1 of those 5 states. In some of the others we would be over 12' over the legal length. Oops!

We had originally planned on spending our first Christmas here in South Dakota but a couple things are driving us to leave earlier than anticipated. Surprisingly the weather is not one of them as the 10 day forecast showed highs in the 50's and lows in the upper 20's. Very bearable for this time of the year.


Our progress here far exceeded where we thought we would be at this point. When we started with a blank concrete slate in March our goal for the year was to get the building enclosed and water tight before heading south for the winter.

For example, we wanted to have the windows in but did not expect to have the roof on. Even with the progress we made prior to our break to go to Oregon for a month when we returned we only plans to insulate with no thoughts of the fireplace or heat! But we even got more than that done. The day before we left, our neighbor Doug came over to inspect my waterlines and plumbing downstairs.
He also finished the plumbing, waterlines and the showerhead, and drain in the upstairs bathroom. Something I would have never been able to figure out by myself.
We also received and accepted a bid from a sheetrock crew who could do some work while we are down south over the next couple months so when we come back we will have two bedrooms, a bathroom and laundry room ready for painting!

Our last act prior to leaving was to installed the double barn doors that Guy and I had built in May. 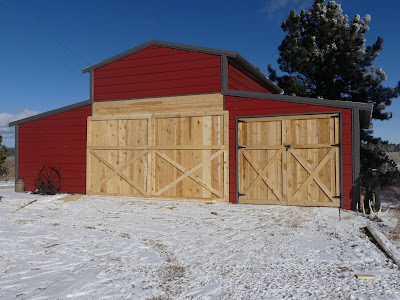 The problem with meeting all those goals is that you always move the goal line further and further out. As tempting as it is to stay and continue working we are ready to head south. What is driving us is the fact that we want to get our rig down to Arizona so we can start advertising it down there, several of our friends are already down there and we are just plain ready for a break.

After saying good bye to our people and animal friends and making arrangements for the neighbors to check on the house several times a week we hit the road.

So how did our trip south go? We could not even tell that the extra trailer was even back there! That is because it wasn't..... After talking it over Monday morning before we left we decided it just was not worth bringing the ATV trailer with us being 12' over the legal limit. What if we got in a accident, would we be covered? What if we hurt someone? Just not worth it. So we backed the ATV trailer into the garage, locked it up and headed out.

I would love to tell you that we were graced with perfect travel weather and no problems for making such a smart decision but.... it was the trip from hell. Actually, a trip through hell would have been a lot warmer! We had winterized the rig before leaving as we knew the single digit temps we were going to be traveling through combined with the wind chills would freeze us up for sure.  Our plan for the first day was to travel 7 hours to Rock Springs, WY. The overnight low was forecasted to be -2F for the night but we figured we could handle it. Well, we got a late start so we only made it to Rawlins, WY by 6:00pm. It was dark and still below 0F. What we were not prepared for was how bitterly cold it was in the rig. When we stopped we went into the rig and everything was frosted and froze up. The dog's water dish was froze. The water, beer and pop in the fridge was froze. We turned on the heat for an hour and it did not even start to thaw out the frost on the cabinets.

So we decided to jump back in the truck and keep driving. There is no way we were going to get any sleep or be comfortable so we may as well keep driving. We drove until about 11:00 pm where we stopped in Evanston, WY right on the Wyoming/Utah border. On this route segment of our trip we hit temps as low as -10 F. This time we decided to try and sleep in the truck for a few hours with the truck running but after 20 minutes of tossing and turning we knew that was not going to work either and we were back on the road. Our goal was to drive two more hours to the Cabela's in Salt Lake where it was only going to get as low as 20. Easy peasy right?  On this leg it got as low as -18F and we hit a couple spots of black ice where the back of the truck slipped a couple of times. Keeping it in 4WD and off the icy spots we arrived at Cabela's at 2:30am but at least it was 19! We turned on the heat, climbed under every blanket we had fully clothed and tried to get to sleep. We did manage to get about 4 hours of sleep but it must have not been very good because somehow I knew the furnace never turned off.

I would love to say the rest of the trip went without a problem but what fun would that be? Our goal for that leg was to make it to Lake Mead where we planned on surprising friends Steve and Joan who are in the area. When we started the truck at Cabela's and hit the road hitting the peak of Salt Lake's rush hour traffic. Well, at least we were 1/2 way through the city at that point. Then the dash dinged and displayed "Change Fuel Filter". No problem, I will do that when we get to Q. About 2 hours later ….ding, ding, ding "Reduced Engine Speed" Ugh! The truck slowed down to 45mph. We limped along for a few miles to the next exit where we stopped, fueled up and cycled the key on and off 10 times. A trick we learned a couple of years ago that us supposed to clear the reduced speed. Back on the road we were going 60 again! An hour later just north of Beaver...ding, ding, ding "Reduced Engine Speed". This time it reduced to a whopping 10 mph. We could not limp along at 10 mph to the next exit so we pulled over and started cycling the key again. Truck and trailer swaying to the air of the semis that were passing us at 70 mph. It was at that point we changed our goal for the day to try to get to St. George where it would be in the 40's and I would try and change the fuel filter.

We called ahead to a campground to see if they would let us work on our truck if we stayed there. No problem they said. Easy for them to say, we were still 80 miles away with a truck that was acting up. Luckily we made it there without any more issues, got set up and went to find a fuel filter. Two hours later I had the filter changed. Barb went shopping and reported that the engine light went off on her return trip! Maybe, just maybe, we would make it to Quartzsite after all!

The next day we completed our last 6 hour leg the next day waving to Steve, Joan, John and Pam as we drove through the Boulder City area.

We pulled into the La Posa South BLM area just outside of Quartzsite where Steve (of Steve and Dianne) and Dino and Lisa greeted us at the water station. It has been a couple years since we have seen Steve and Dianne, way too long. As for Dino and Lisa, maybe it is too soon, time will tell! (Just kidding guys... really...)

Once we were full of water Steve guided us to a spot they had save for us and we were all set up within an hour. Although we don't have our ATV, we are looking forward to several weeks of relaxing, visiting and happy hours here in the sun! 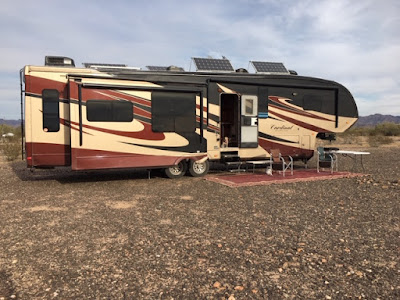 Posted by Jim and Barb's RV Adventure at 3:05 PM