Sometimes I Wish I Were Color Blind

We have been back a little over a week and have gotten settled in to our new home.
It is amazing what you take for granted when you don't have it. The bed, appliances and working bathroom made a world of difference and we are actually quite comfortable. Barb has been searching the online marketplaces for a used love seat or couch. The RV chairs we brought back with us a fine for a little bit but not something you want to use for the next year or so until we are ready for the good stuff.

The deer quickly learned we were back. The day after we got home a couple stopped by to say hi and welcome us back. A week later we now have up to 13 stopping by at any given time to see what we are up to. They are so curious they have taken to getting within inches of the window and looking in to see what we are working on. 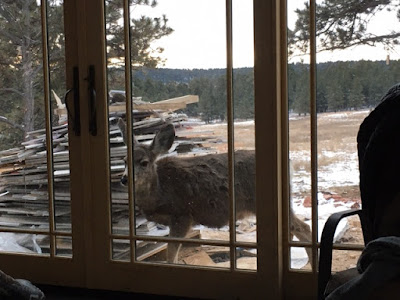 Daisy does not really appreciate their antics while Dakota just pretty much ignores them. If we open the door when they are around Daisy will tear out after them and chase them away. Dakota will just go out there and walk amongst them pretty much ignoring each other.

This week we have been busy working on the fireplace and putting primer on the sheetrocked walls. Does not seem like a lot when I write it but it took pretty much all week.

When we left in early December the fireplace looked something like this.... 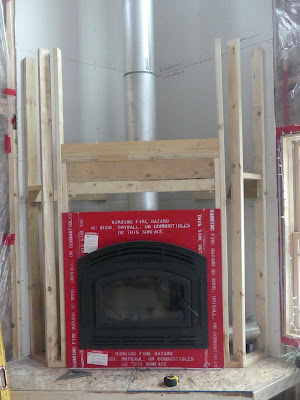 This framing went slower than I thought as I was pretty much making it up as I went. I also had to take time to wire in the blower for the fireplace as it was going to be covered up once I put the sheeting on. Now it looks like this and is ready for stone. 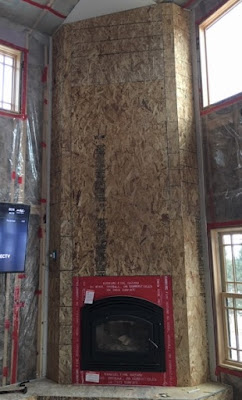 Speaking of stone we drove to Hill City and spent an hour at Dakota Stone looking at different samples of stone trying to determine what we wanted on both the outside of the house as well as the fireplace.

The first decision is do we want Thin Veneer... 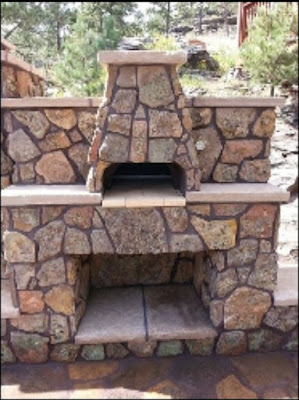 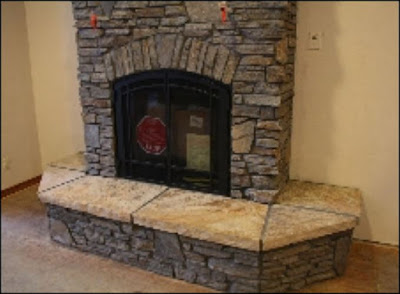 The Veneer goes a lot faster as the stones are laid flat and cover more area with each stone. But we like the look of the ledge stone so we are going to go that route. The next decision is how to stack it. Dry stack with no visible mortar…. 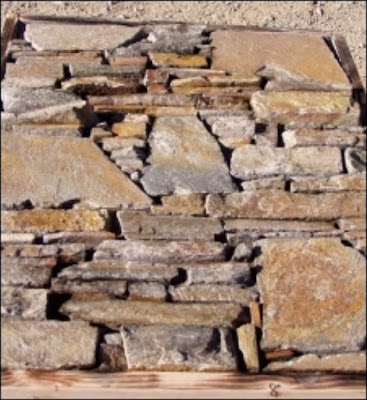 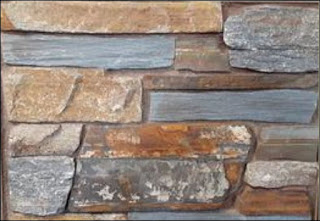 Or a thick mortar set…. 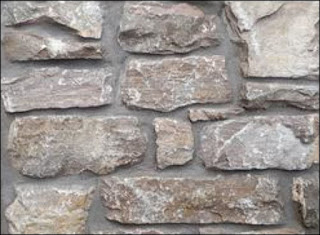 We are going to go with the thin grout set.
Our other big task of the week was priming the bedrooms, laundry room and upstairs bathroom. Breaking out the new sprayer I read all the directions, watched a few videos on how to spray and I was ready to go!

The first step was to have Barb go through each room sanding out and rough spots the installers missed as well as spackling any holes or dings.
We started in the master bedroom closets as if something went wrong we figured that was an area we would not care too much. So with Barb standing behind me we started spraying. It actually went amazingly well. We sprayed the ceiling first then worked our way to the edges and walls. The only place we ran into trouble was when overlapped the areas we had already sprayed. There is an art to getting enough to cover but not too much so that it starts to run. Much better to go over it thinly twice than trying to do it in one pass.
Next step was to decide who color to paint each of the rooms. Barb had stopped by the paint store to pick up over a half a dozen samples and stuck them to the wall.  Keep in mind that all the samples were beige, just different shades of beige. She then called me into the room to ask me my opinion. Oh God, here we go. I truly hate it when she does this to me. We have done it hundreds of times with the same result. It goes something like this….. 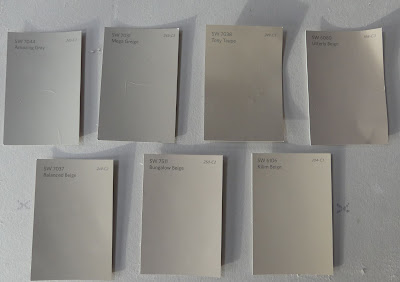 But this time it did not go this way. Instead she again reiterated that men and women are truly from different planets. So with trepidation I approached the samples looked them over and within 10-15 seconds made my decision and pointed to the one named Utterly Beige. Boom, decision done! Why Utterly Beige? Well, they were all beige but this one was just so...utterly beige.

So now I sat back and waited for her to tell me that I was wrong, that my opinion did not matter and that we were going with a different color. Instead she picked up one of the color samples and went through a 10 minute dissertation on the color. The hues, the other colors that she sees in the beige and what colors would complement  it and what colors would conflict with this particular shade. Then she sets that sample down, picks up the next one and does it again, and again, and again. By the time she picks up the 4th sample my eyes are glazed over, I have a serious cramp in one leg and all I hear is the teacher from Charlie Brown “Wa, wa wa wa wa”...... Just kill me now.

Some 60 minutes later…..I was day dreaming about what I was going to have for happy hour that afternoon when she stopped talking and was looking at me. As my eyes come back into focus I see that she is holding the Utterly Beige and says “So I agree with you and think we should go with this one”. Wait, what?!?!? I had a 16.66% chance of picking the right one and I did it! Hey, I will take the small victories, they are few and far between.

We only have to go through this exercise 3 more times and all the paint colors will to decided.

We try to make time of the dogs each day by going for a walk, throwing Dakota's toy and letting them run around. 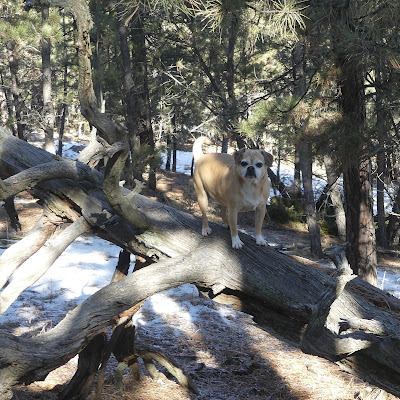 Posted by Jim and Barb's RV Adventure at 3:47 AM