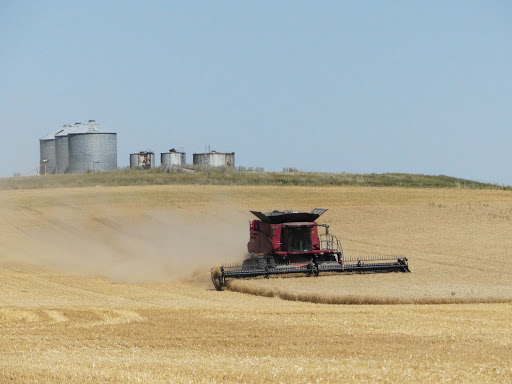 Have you ever found yourself driving down a country road and come across a very slow moving pickup truck going well under the posted speed limit? If you have, it was probably a farmer. To you it may seem like they are never in a hurry to get anywhere, going 45 in a 55. To them they are flying!

Spending most of their days in a tractor going down the field anywhere from 2-10 miles per hour, going 45 to town is like city people going 80 on the interstate during rush hour! Surely, I am kidding. Most farmers don’t drive that slow but if they are, they are probably checking out the neighbors field conditions and comparing it to theirs. You see, farmers are very prideful competitive and want/hope to be doing a little better than the field down the road. Of course weather, and other factors out of their control have a lot to do with it as well.

By now you have probably figured out that we loaded up the camper and pointed it towards North Dakota this week! The drive up was uneventful. Our route takes us through Sturgis. The rally had ended just a couple days before passing through and they were busy tearing stuff down.

After a 9 hour travel day we arrived at the farm a little after 7:00pm and got all set up. DeAnne came out to greet us but "the boys" were out in the field. A short time later Dylan pulled into the yard and said “You ready to get to work?”. We were not even there 15 minutes and I was off to the field. With just over 5,000 acres to harvest there is no time to dilly dally!

They are busy combining wheat at the moment and I was anxious to get into action! There are basically three roles in harvesting. The combine driver, the cart driver and the truck driver.

The combine driver has the most meticulous job cruising up and down the field usually at 1.5–4 mph running the head of the combine within inches of the ground trying to get all the wheat and leave as little stubble as possible. Eyes glued to the ground, they are on the lookout for rocks and other obstructions that could get sucked up into the header and ruin your day. Although it is mainly rocks they are looking for there are other things that somehow find their way into the field. Things you have to wonder how they got there like dead coyotes, car parts and this week included a 1.75 bottle of vodka….in the middle of a wheat field. One cannot help but wonder about the story of that bottle! 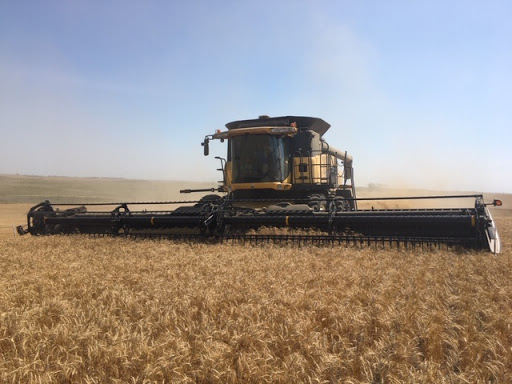 The hoppers of the combines will hold between 350 and 400 bushels (21,000-24,000 #’s) of wheat. Once the hopper get almost full the sensors will turn on strobe lights on top of the combine. That is when the cart driver jumps into action and races down the field (at 8-12 mph) to catch up to the combine and empty it on the go. The cart driver has to pull up next to the combine, get within 3-5’ of the header, match speeds and line itself up with the auger that swings out of the combine. Seems simple enough and it is until it isn’t. Go too fast and grain will spill out the back of the cart, go too slow, it will spill out the front, too far away, it spills out the far side. Get too close and run into the header….well, we don’t even want to talk about that.

The cart will hold about 1,000 bushels of wheat but you rarely let it get that full. Once it is about ½ full or so you go over to the semi trucks and dump in there. The scale on the cart logs how many pounds are loaded into the semi, which grain bin it is going into back at the farm and how many pounds in total have come off that field.

The most important thing about dumping into the semi is not to over load it. The road limits in this area are 80,000 #’s so we try to get as close to that as possible.

Once the truck is full, the truck driver is off to the farm where the big auger is set up at the appropriate bin and it is emptied. 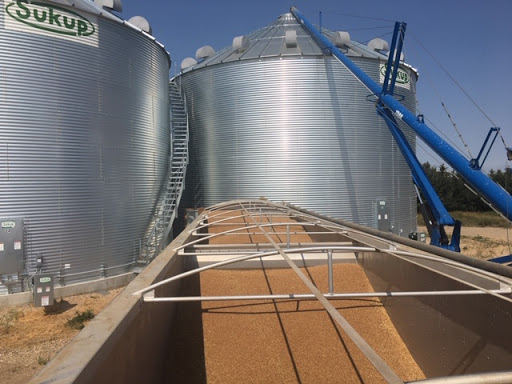 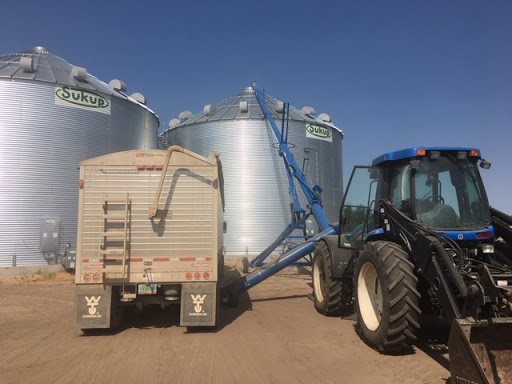 Once that is done it is back to field to pick up the next truck. It takes anywhere from 45 minutes to an hour to turn a truck and get back to the field. By that time the next truck is usually full and waiting.

When everything is running smoothly, it goes like clockwork and everyone is buzzing along. But this is farm life and not everything always goes smoothly. If one component goes down it affects the entire group. Flat tires on the semi, broken shear bolts on the auger, broken sickles on the header will bring the entire operation to a screeching halt. One time I saw Farmer Bob stop his combine in the middle of the field so I moseyed the cart over there to see what was going on. All I saw was Bob’s feet sticking out from under the combine and bent shards of metal being thrown into the field from some mad creature under it. I did not stop as those feet under the combine did not look too happy. Somehow the fan blades had broken and totally destroyed each other. Luckily the combine is still under warranty and the service truck came right out to the field and fixed it. 5 hours later he was back in business!

Another time when Dylan was combining, this "swamp jumped right out in front" of him and he sunk about 3’ into the mud. Luckily the hero cart driver (me) was close by to pull him out and take pictures for prosperity! They just love it when something goes wrong and I am close by with my camera! 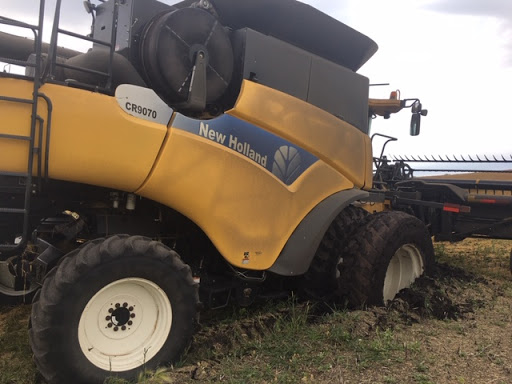 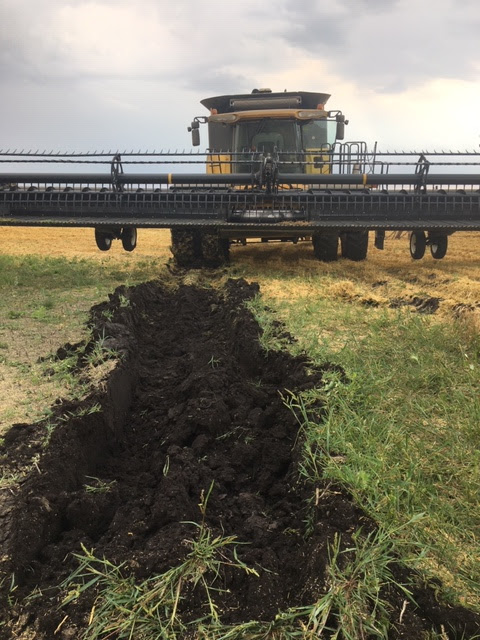 In a typical, no issues day they can get about 250 acres done in 10-12 hours. On the perfect day they would run longer than that but the morning and evening dew on the wheat affect the combines so we cannot start until about 10 or 11am and have to quit about the same time at night. 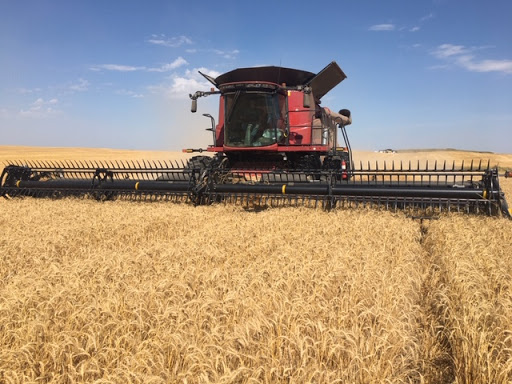 As much as we enjoy being up here we are already missing our home in South Dakota. The week before we left we had made some great progress at Kevin’s place. He made sure to line up as much heavy work for us to do as possible as he was going to be alone for the next several weeks.

The week before we left we put in the deck on the north side of his house.... 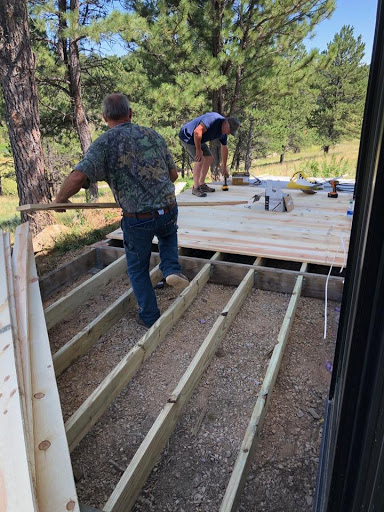 and got the post and timber trusses set for his covered porch. 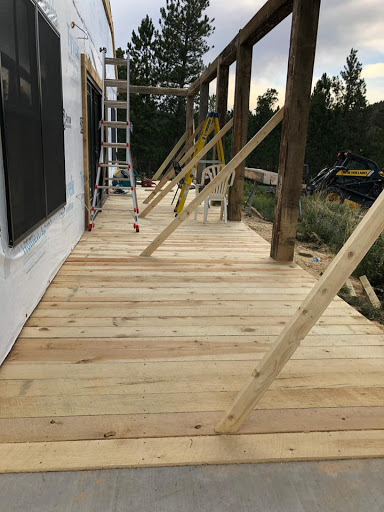 We also scored on a couple of cattle guards I found on Facebook Marketplace! We had been wanting some for quite a while and will install them when we get back. 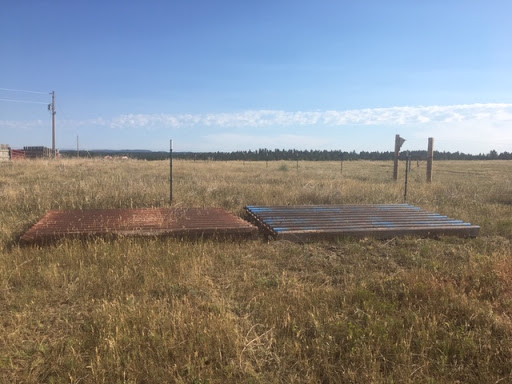 But that will have to wait a few weeks as for right now we have more crops to harvest and Farmer Bob has removed all the tires from our truck promising to give them back once all the crops are off the field. But for now, it is down the field and off into the sunset! 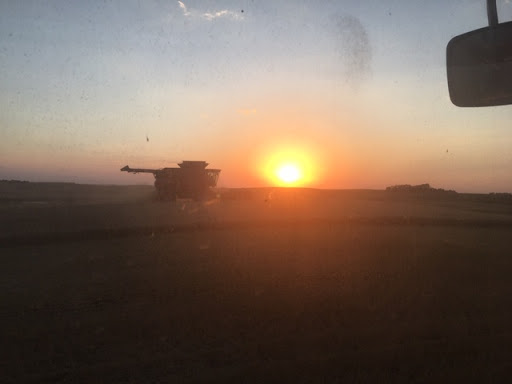 Posted by Jim and Barb's RV Adventure at 5:57 AM