We had never been to the Yukon before, loving the outdoors I grew up in wonderment of someday going to the Yukon. TV shows depicted it teaming with wildlife of all kinds; the mighty Yukon moose and grizzly bears larger than Volkswagens. So with great anticipation we crossed the Yukon border with our eyes peeled for any kind of wildlife. We were not disappointed! Within the first mile we saw something ahead on the side of the road. At first it was just a tiny speck, we could not make it out but we knew it had to be something good. As we got closer we and this mysterious form materialized were able to see it was not a moose or a grizzly bear, it was a man, a man who had set up a table and chair along the highway like he was a kid selling lemonade. What was a man with a table and chair doing on the side of a remote stretch of the Yukon? We did not slow down, instead we sped up just a little but as we past we noticed his handmade sign in front of his table with just one word written on it; “Pot”, one word and a pretty little picture of a leaf.
We thought about turning around and taking a picture but our better judgement took over and we carried on. The interesting thing about this stretch of the highway is that it is only crosses into the Yukon for about 2 miles before curving south back into British Columbia. In fact it does this several times over the course of the next 50 miles back and forth across the border before you actually stay in the Yukon.

A few miles down the road we stopped at a gas station to fill up with diesel (99.9/ltr) and I asked the attendant if pot is legal up here. He looks at me kinda weird and says no….. I then tell him about what we saw and he started laughing saying that they get all kinds up here. Just wait another week until the mushroom pickers get here, they are a really interesting bunch! So that was our introduction to the Yukon……


We arrived in Watson Lake with a couple things on our agenda. First was to stop by the Sign Post Forest where there are thousands of signs from all over the country; city signs, street signs, license plates, you name it they had it out there. Anyone is welcome to put up a sign, if you did not bring one, no worries, you can buy a piece of wood at the hardware store for $6, go to the visitors center to decorate it and use their screw gun to put it on a post. 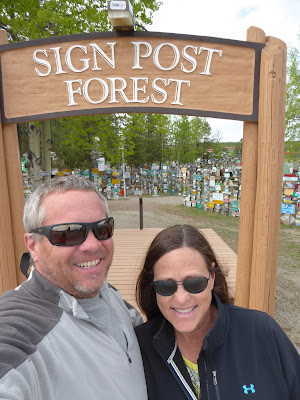 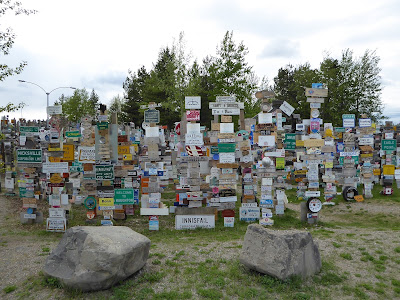 We did not bring a sign, nor did we really want to pay $6 for a piece of scrap wood. Instead we got a Sharpie from the camper and found a nice little spot on the back of someone else’s sign to leave our mark. 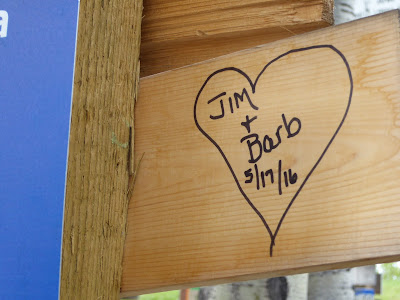 While in the Visitor’s Center we asked the woman behind the counter where a good place to eat was. It had been a while since we had eaten out. She said they had an excellent Chinese restaurant in town so we thought we would give it a shot. Well, let’s just say that her definition of excellent Chinese is a little different than ours.


While researching our Milepost book Barb noted that there is a bird banding station just outside of town that operates late April to the first part of June. The directions in the book were not the best; “Turn off to south at west end of Albert Creek Bridge for Albert Creek Bird Observatory. Follow gravel road and dirt track 500m to station”. The problem was that Albert Creek Bridge was not signed. We guessed and went down a remote gravel road for a couple of miles and then we saw this very small sign on a tree. 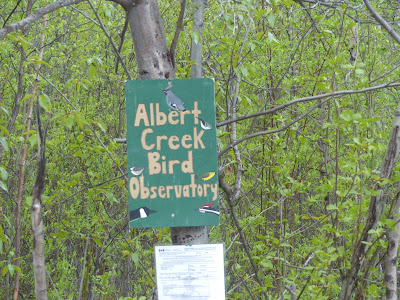 Turning, we followed a rutted two track road which ended at a small clearing with a travel trailer and a tent in it. We got out and asked the gentleman there if this was the bird banding place and he said “It sure is!” He said that they capture and band the birds from 4:30am to 10:30am and we were welcome to join them. Since it was 9:00pm we said we would be back in the morning and he told us to just park along the edge of the two track somewhere and spend the night. (Note: It is very tight down there do not bring anything bigger than a pickup camper down the road) Well we did not quite make the 4:30am start but we did join them at 7:30 for a few hours and it was very interesting.
They have a series of nets set up throughout the area which they check every 30 minutes. If they catch a bird, they put it into a small cloth bag were it actually stays calm. They bring it back to their travel trailer where they tag it if it does not already have one and record data specific to the bird. While we were there they caught about ½ dozen birds. 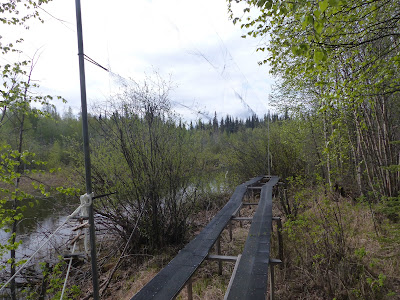 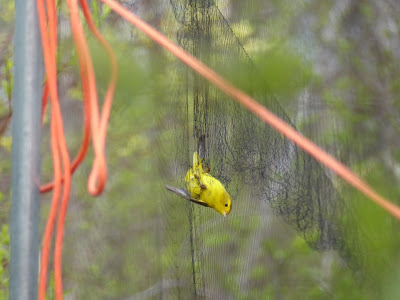 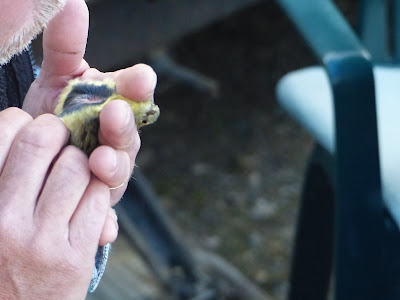 They blow on their bellies to measure fat content..... I tried it with Barb and got slapped! 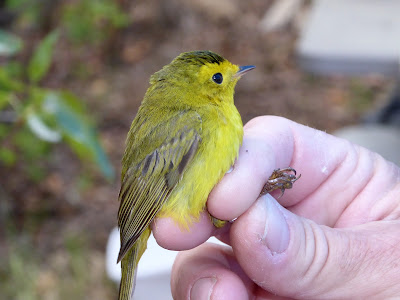 There was a total of 4 people working that site, a combination of paid and volunteer staff. We noticed they all had bear spray on their belts and I asked if they ever had any bear trouble. The girl said that the first day she was there she slept in her tent and woke up with a bear sniffing her head through the screen. At first she said she thought it was her dog but then she remembered her dog was not with her and opened her eyes to see a bear sniffing her head! She decided to sleep in the travel trailer after that. It was a very interesting day and worth stopping at if you are in the area when they are banding.
As we continued our journey towards Whitehorse we stopped at Rancheria Falls to take some pictures and stretch our legs. 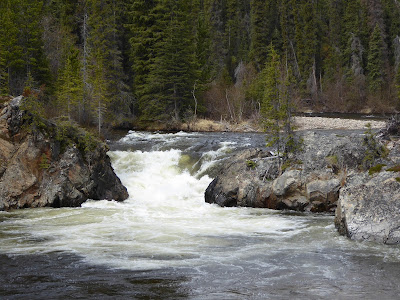 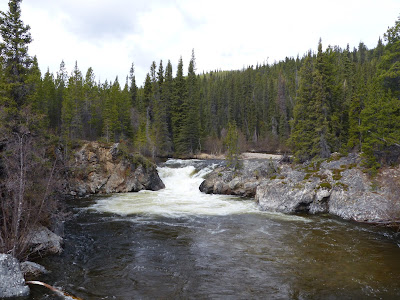 Next stop Johnson’s Crossing for their “World Famous Cinnamon Buns”. Barb and I split one and agreed that it was better than the one we got in Testa River. The drive between Watson Lake and Whitehorse is not quite as scenic as our drive through BC but it was beautiful nonetheless. There was not nearly as much wildlife but we did see our first Grizzly Bear! 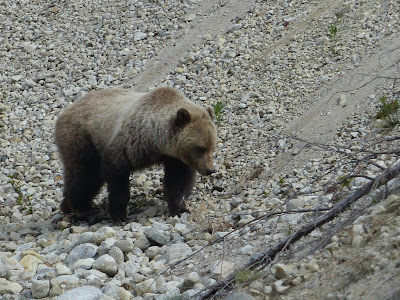 Arriving in Whitehorse we went to the most popular RV Park in town…. Walmart! It was a long day and we were whooped.
We spent the next day stocking up on groceries, doing laundry, dumping the tanks and filling our fresh water (Walmart has a free dump and fresh water stations). The highlight of our day however was touring Yukon Brewing Company! 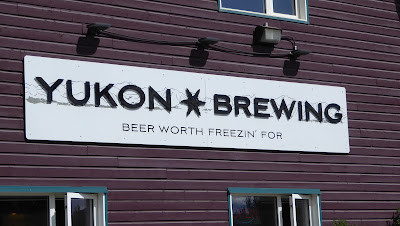 A small local brewery, they only distribute to in the Canadian Provinces. Best known for their Yukon Gold brew, they brew about a dozen beers as well as distilling a single malt whiskey and a vodka. For $10 each we got to tour the brewery and sample 10 beers and the vodka. My favorite was the Yukon Gold while Barb liked Bonanza Brown.  Definitely worth seeing if you are in the area! 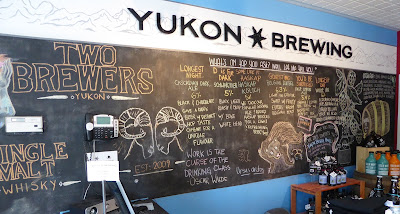 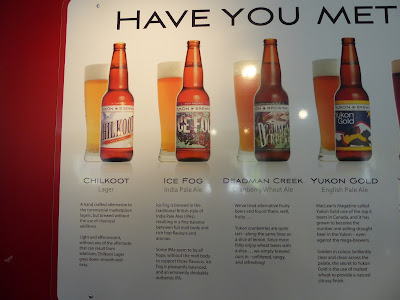 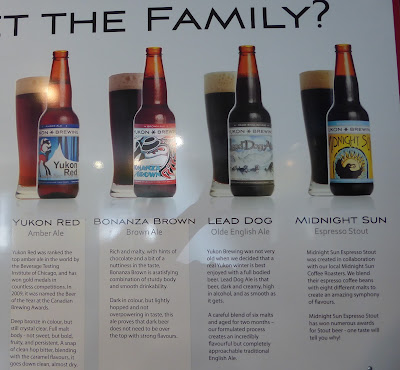 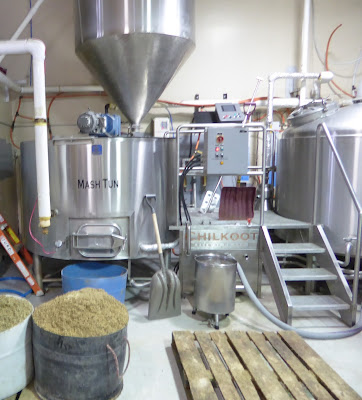 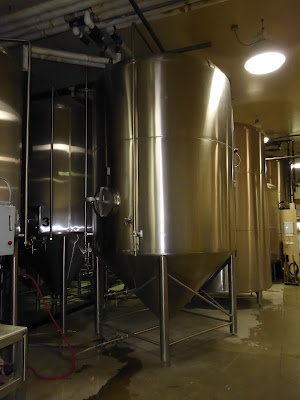 Next up Skagway Alaska and another ferry ride!
Posted by Jim and Barb's RV Adventure at 6:16 PM