All Alone in South Dakota....


Well, we are all alone on the South Dakota prairie. The Jordan’s, who as you may recall stopped by for a quick visit on September 14th departed on November 27th to head to warmer climates. Their plan was go stop for a few days and help us with a little fencing on their way to Sioux Falls to get drivers licenses and plates for their trucks, What ended up happening will change their lives forever, I guess that’s what happens when you stop and see us…. Be warned!
10 weeks later, they did end up getting their residency in South Dakota but they also got a deed to 40 beautiful acres and their wallets a little lighter. Looking back at all the projects we did together, it is amazing how much we got done. It was fun seeing them experience new things for the first time and we turned them from prairie dog lovers who thought they were so cute to prairie dog haters who run for their rifle at the sight of one. It was great having them here, we had lots of good times helping each other with various projects, going to dinners and exploring the area. They are now headed to Arizona where I am sure we will run into them again sometime this winter.
Meanwhile the mild weather here has allowed us to stay much longer than we thought we would be able to.

As you can see the actual temps and forecast are much better than the historical averages.

But the forecast for next week shows trouble on the horizon. Tomorrow is in the 50's but the next day only 24! Our self-imposed exit plan is to be set in motion when we have multiple days with lows in the teens and next week's forecast has just that. We may try and stick it out but this weekend we are packing everything up in case we decide we have had enough.

We know it is just a matter of time so we are planning our exodus and getting things ready. There is one slight problem….The shed we ordered in early September, which we were promised would show up by Thanksgiving is now not going to be here until mid-January. And we want to be here when it is constructed to make sure it is put in the right place. So…… when we do leave we want to go no more than 12 hours away so we can run back up when we get the call on the shed. We were thinking Amarillo or Santa Fe. Both are within 12 hours and are much warmer. Any input would be appreciated!

We had our windiest day yet here the other day. We need to get a weather station with a wind gauge on it but I bet the sustained winds were 40mph+ with gusts well over that. I had totes on top of the left over Styrofoam sheet from insulating the rig but during one particularly strong gust it picked everything up and carried the sheet 50 yard where it imbedded itself up in a tree.
Barb has continuing to go out bow hunting and seeing several smaller bucks but no sign of the big guys. They have either gone into seclusion or been harvested by some other hunter. 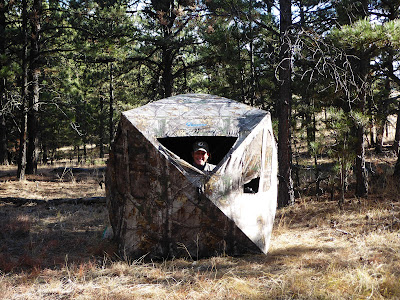 Speaking of bucks. Remember this guy? He is an odd antlered buck with a tall rack and two long sticker points coming out the front. 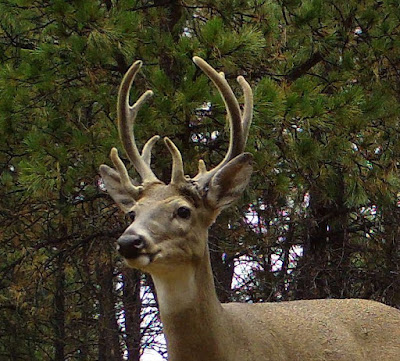 Well, he has had a rough fall as he went from this full rack to this…where is lost one of his sticker points off the front.
Then a week later he showed up missing an entire antler! He must have had an epic battle with another buck and ended up on the losing end.
Barb also completed another project around the water hydrant next to the rig. She put in a small walkway to make it easier to hook up and stay out of the mud. 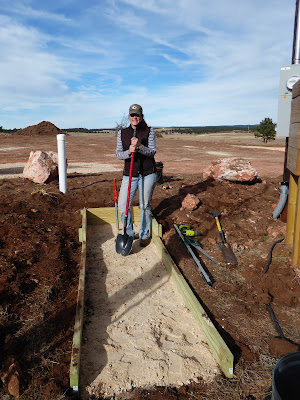 We'll see what next week brings but our next post just may be from Texas or New Mexico, stay tuned!
Posted by Jim and Barb's RV Adventure at 6:07 AM