Barb is the ultimate route planner. She spends hours hovered over a map and the internet finding places to stay and interesting sights to see using the most efficient routes. She had the next few weeks planned taking us from north Texas to central Texas down to southern Texas. Sights to see, places to stay and people we were hoping to visit. Our friends Red and Pam were on the route and we hoped to catch up with them as we swung through central Texas. Well, they must not have gotten the memo as they were leaving well before we planned on getting to their area.
So we scrapped our plans, packed up and made a beeline to go see them! They were staying at their brother’s place just south of Junction. The total trip was about 7 hours much of which was through flat, open farm country. Those of you who know us, know we are fascinated with farming. It is so interesting to see what and how crops are raised across the country. Cotton seems to be the primary crop in this area of Texas. Miles and miles of cotton fields dotted with oil rigs. The combines and other harvest equipment used down here are a lot different that we are used to seeing up north!

As we got closer to Junction the open, flat terrain was replaced with wooded hills. Of everyplace we have seen so far in Texas, we like the hill country the most. The diversity of this area is very cool. Junction itself, is a cute little town of just under 3,000 people and where the North, South and Main Llano Rivers meet.
Red and Pam were about 20 minutes outside of Junction down a gravel road with several large ranches on it. A couple of the ranches are high fence game farms with exotic animals on them Aoudads, Axis deer, Blackbucks, among others inhabit these ranches.

After getting settled Red took me for a walk to an area overlooking one of several game feeders on the property. Texas has a totally different view on game management compared to South Dakota. While it is illegal to bait the deer in South Dakota, Texas encourages and even rewards property owners for feeding the wildlife.
In addition to whitetail, Greg’s property also has wild pigs, coyote, bobcat, mountain lion as well as axis deer and blackbuck antelope. All are native to the area with the exception of the axis and blackbuck (both native to India) which apparently escaped from an exotic game ranch several years ago and are thriving/breeding in the surrounding countryside. Part of Greg’s wildlife exemption requirements with the state is that he needs to feed, manage and record the wildlife on his property and part of that is harvesting some of the animals.  Red asked if I would be interested in hunting an axis deer. Would I?!!??! I could not say yes quick enough! They can be hunted year round as they compete with the native species and the state does not want them out in the wild.


But first we needed to get a new hunting blind in place. We spent the next morning painting and transporting it to the field. 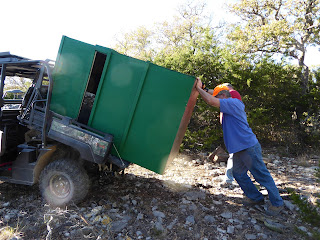 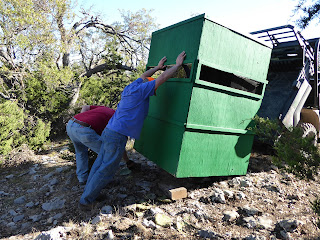 We did not like the way the color looked on it so we painted it a darker green the next day as well.
Red said I could shoot an axis buck or doe but said that there was one particular buck in the area that he would hold out for. I hunted morning and night for 3 days seeing countless whitetails, axis does and a smaller axis buck.

Meanwhile Pam and Barb went geocaching, went for walks along the country roads and even washed our rig and the trucks! We had lunch at a local BBQ restaurant and of course had to check out the Donut Palace.  We had great dinners every night and we have not eaten that well in quite a while! Did we marry the right women or what?!?!

The last day of our stay I was prepared to harvest an axis doe if the opportunity presented itself. Red wanted some meat and we agreed to split anything I shot. I went to the newly constructed blind while Red went to another stand a little ways away where he was going to take a whitetail doe if the opportunity arose.

I sat there watching several whitetail does and a pretty nice buck and I could see the smaller axis buck bedded about 300 yards out along a tree line but no sign of axis does or the bigger buck. The whitetail does grazed off and headed towards Red so I knew it was just a matter of time before I would hear him shoot. About 5 minutes later, what should walk into view? The big axis buck! Earlier, I had asked Red how I would know the big one when I saw him and he said; “As soon as you see it you will know it’s him” And boy was he right! I had the rifle up and on him within seconds of seeing him. Within seconds of my shot, I heard a shot come from Red’s direction. My buck was down and if I knew Red, he had a doe down as well!
We met back at the rigs about 20 minutes later to compare notes and indeed we both had harvested animals.
Now the work began! The following day (we stayed an extra day now) was dedicated to visiting the local taxidermist followed by processing the deer. Both Barb and Pam joined in on the fun as well!


We had a great time with Red, Pam and Greg and cannot thank them enough for their hospitality! We left Junction the following morning and headed back north to continue our original plan.
Meanwhile, we have been closely following the news coming out of South Dakota where the 3rd largest fire in Black Hills history has burned over 57,000+ acres (84 square miles) and devastated Custer State Park. Although our property was out of the path, over 70% of the park was burned. As of Saturday night (12/16) 80% of the fire is under control. The buffalo (60 head), antelope and elk herds were able to escape the fire but the burros were not so lucky. All 9 have been located but are being treated for burns. The park is asking for donations of both hay and money to help.

Next stop Ganbury where we plan on spending a few days with one of Barb’s barrel racing friends who moved to the area several years ago!
Posted by Jim and Barb's RV Adventure at 5:24 AM