There’s an old proverb; Give a woman a fish and it will feed her for one night, teach a woman to fish and she will make you look bad the rest of your life. That right there is the story of my week, or should I say the story of my life. Truth be told, I probably cannot even take credit for teaching her how to fish either. That credit would go to her dad. With Barb back the world is whole again and life is good. She is the love of my life and I never want to go three weeks without her again.

When we met in the fall of ’85 there were a lot of things that attracted me to her. But one thing above all else was the hook. Was it her beautiful hazel eyes? Her infectious smile? Her long flowing dark hair? Her glowing personality? Or her perhaps it was the fact that she owned a fishing boat. Only I will know the true answer to that question. One clue was that we met in November and were married in February well before fishing opener. This was one catch I was not going to let get away and there is no one else I would rather fish with. 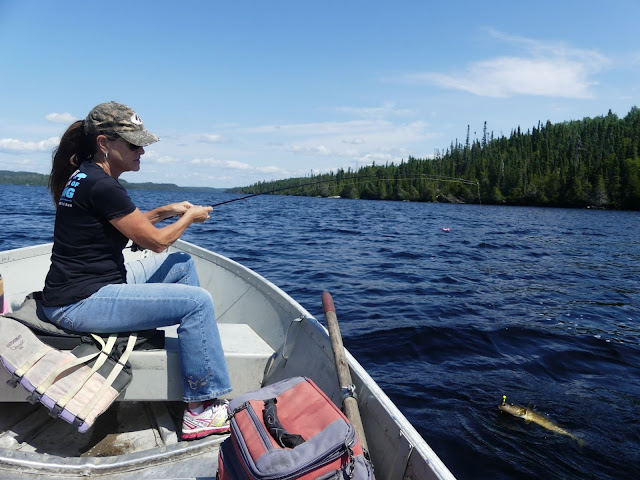 From day one I have always treated her like one of my fishing buddies. I don’t tie her jig on the line, I don’t bait her hook, nor do I take the fish off. In fact it is funny when another male fisherman joins us in the boat and tries to do all those things. Sometimes she will give me a wry smile and let them do it while other times she politely refuses their help just saying “I can do it”.

Oh it has its drawbacks. For one I cannot come home from a long day on the water and spin yarn after yarn about how many fish I caught and the one that got away. She refuses to “go” over the side of the boat like all my other fishing buddies so we have to stop by an island once in a while. And of course there is always the “she out fished me again” issue.

But it is all worth it. She was itching to get on the water when she got back so bright and early Monday morning we hit the road and headed to Northwind where she proved she has not lost her touch landing walleye after walleye. It was good to be on the water with her again. 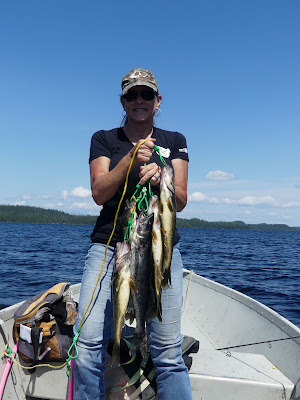 I also had the opportunity to take another group out this week. Ralph, his son Ralph and his son’s friend Jay flew in from Baltimore to spend the week up here. Ralph Sr. had never fished in his life and I mean never….. Ralph Jr. and his friend both 16 had some fishing experience but had never been to Canada fishing so I offered to take them out. 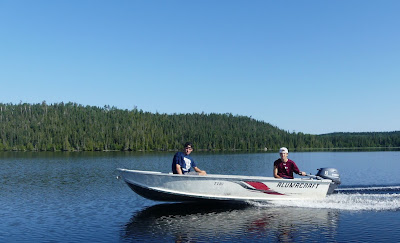 During our outing, Sr. caught not only the first, the most but also the biggest fish with a 26 ½“ walleye! It was fun to see father and son rib each other as they caught fish but Jr’s mood definitely changed when his dad reeled in that monster. I have a feeling that dad will be teasing his son about that for years to come….”Hey, remember that one time I went fishing and totally out-fished you?” If I were Sr. I would just hang up the fishing pole and rest on that the rest of my life!
We have also been busy wandering the bush looking for bear sign as bear season opens in less than a week! I have yet to see a bear but thereis plenty of sign in both tracks and scat and based on the size of some of them, there are some monsters out here!
They have 9 hunters coming in for the first week of the season and I can honestly say this year as the most bear sign that I have ever seen up here. I put on over 600 miles on the ATV looking for just the right spots and I think it is going to be a great season!
I was reading a magazine article the other day (yes Dino, I can read, not just look at the pictures) and it talked about how important bear hunting is to the Ontario economy. According to the Ministry of National Resources a 2017 study showed that bear hunting brought in over 15.6 million dollars into the economy. If the other resorts in Ontario are anything like Pasha, they as well as many of the local businesses depend on this aspect of their business as much as the fishing to make ends meet.

Our last fishing trip this week involved a small remote lake 9 miles back on logging roads. You can get your vehicle to within ¼ mile of the lake but then you have to carry everything in from there. Motor, gas, poles, bait. The boat is stashed on the lake so basically everything but the boat. I bet this lake sees less than a dozen fisherman a year. Since I was scouting bears in the area Barb met me at the lake when I was done. We did not have a lot of time but within 3 hours we had our limit of 8 fish and had fresh walleye again for dinner. I know, it is a burden but someone has to do it!

Posted by Jim and Barb's RV Adventure at 5:46 AM