Week one I kept myself busy fishing with my friend Bob and his crew, week 2 has been a lot slower. It is just not the same up here without her. While Bob was here I ate well, breakfast, lunch and dinner. But when he left I found myself wandering the camp aimlessly with the dogs and a plate going from cabin to cabin begging for food; “Please sir do you have any food to spare?” At first they were more than happy, I got enough food to feed not only myself but the dogs as well. But as the week went on fewer and fewer doors opened as I walked by. I would knock and could hear hushed whispers inside but most would not answer. There were a few that must have felt sorry for the dogs and opened their doors but even they gave out after a few days.

By the end of the week I was walking around with my plate, cold and hungry. My hair was disheveled, my shirt was on inside out and backwards and I only had one sock remaining which was flopping around only half way on. Thinking back, maybe my fly was down, but then again I was so despondent, I don’t remember if I even put pants on at all half of the days.

Even the diehards who had fed us all week long had stopped opening their doors. Instead they would throw stale buns and other scraps at us as we walked by. Between me and the dogs there was a mad scramble for the scraps. Dakota, being so timid was easy to scare off. But Daisy was another story. She and I got in a stare down more than once after a stale piece of bread was thrown on the ground between us. Growling with teeth gnarled I was able to scare her off most of the time but twice the look in her eyes had me backing down for my own safety. Man, I miss Barb!

I went out fishing once with a couple we met up here 4 years ago. Mark and Deb hail from Winsor Ontario and have been come up here 4 of the last 5 years with their two boys. Now 21 and 19, the boys have jobs and other commitments and could not come up this year so Mark and Deb decided to book two weeks up here instead of one! We had touched base throughout the year and were looking forward to fishing with them. Unfortunately Barb did not make it back in time to see them. We went to Northwind, another one of our favorite lakes. 11 miles long, about a mile and a half wide in its widest spot. And deep, we are talking over 100’ deep in some spots where trophy walleye, northern and lake trout lurk in the depths.
It was dark and overcast but the rain held off. We were targeting walleyes that day and started out at a spot called “The Tourist Trap” and for good reason…… everybody fishes there. But it was changeover day at the resorts in the area. Outgoing guests leaving, incoming guests have not arrived yet so we had the entire lake to ourselves all day!
We caught lots of fish, if I was to guess… probably 30ish each with the biggest one being Mark’s 25”’er.
We enjoyed a shore lunch on one of the islands and called it a day after 6 hours as I needed to get back and let the dogs out. All in all a great day and for once I could fish without worrying about Barb out fishing me!
The rest of the week I just not feel like going out fishing. Just not the same without Barb. Man, I miss her.

Instead I read books, played with the dogs in the water and went out in the bush and played with Chad’s new Kubota clearing trails to the bear stands. I love being out in the woods! 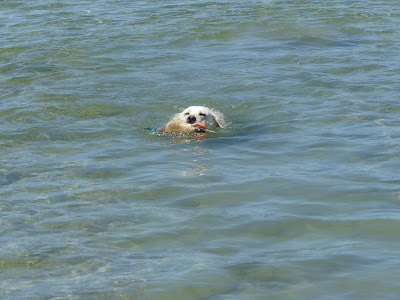 Tuesday night is Fish Fry night here at the resort. Yet another opportunity for a meal! Everyone brings fish and a dish to pass (I brought a beer but did not pass it). Chad and Michelle fry up the fish and french fries. It is our favorite day of the week here!

I of course called Barb everyday but she was so busy that the only time she could talk was at night and with the 3 hour time difference I had to call her at 10 or 11pm to get any quality time with her. Man, I miss her. She has had a very hard couple of weeks. Besides the emotions of losing a loved one she was executor of her stepmothers estate. Taking care of all the financial obligations, arranging the service, listing the house as well as selling a vehicle and remaining assets. Barb being Barb got it all done but not without overwhelming hardship. The hardest thing was telling her stepsister and kids that they had to sell the house. Apparently they had been told that they would be able to keep it and live there once the estate is settled. Unfortunately the bank had another opinion. One of the grandsons had been living in the house the past several years and he needed to find a new place to live. I cannot even imagine how difficult those 18 days were. We both learned a lot about setting up estates and making sure we have everything laid out as efficiently as possible. On her last day there Forrest drove down from Klamath Falls, helped her pack up a Uhaul with some of her dads possessions she wanted to keep and drove them back to Forrest's where he will store them for us. Today she hops on a flight that will take her from Medford Oregon to San Francisco to Toronto and finally to Thunder Bay. 13 hours, 7 minutes if everything goes smoothly.....fingers crossed, she has not had a lot of luck with the airlines recently.

Well, I better post this blog and get to cleaning the camper, only 11 hours and 53 minutes until I pick her up! Did I mention I miss her?!?!?!?
Posted by Jim and Barb's RV Adventure at 4:42 AM