Thanksgiving, Great Friends and Great Progress on the House!

The past two weeks has been a whirlwind of activity and a whirlwind of weather. We went from 50's to teens pretty much over night, but it is so beautiful!
We were trying to get the finishing touches done on a couple of things in the house before the snow and before Kevin and Cheryl arrived on the 23rd. And we did it!

We got all the vapor barrier done and sealed up and we got heat!
As promised the heating contractor arrived on the 16th and finished up the job, turned the system on and left. He said it should take about 24 hours for the system to get up to temp. When we woke up the next morning and went into the house it was 72 degrees! And for most of you that know us 72 is like a sauna. So we dialed it down a bit and love the new system. For those of you who have had in-floor heat before you will know exactly what I mean when I say I don't know why we did not do this in our other houses, it is the best heat that we have ever experienced. It heats the entire house, the concrete, the wood, the walls, the furniture and it stays heated without running for long periods of time.

With our old forced air systems it would be hot while the furnace is running but as soon as it turned off you could slowly feel the temperatures dropping. With this system you don't feel that at all and you don't hear it. It makes a noise comparable to a refrigerator. The one thing I don't like about it is that you should pick a temperature and leave it there both day and night as it takes so long to get to the new temp. This means no turning it down to 48 at night. We have found that 67 is the optimal temperature during the day while in the house working but at night I am hotter than hell at that temp. I am trying to get used to it but so far it is not totally working.

Speaking of that we bought a bed and are now sleeping in the house. It is just a temporary blow up one but we figured it would be nice to have when/if the grandkids come to visit.
We also got the remaining soffit and fascia up and boy was that a chore! The final day I had to get it done as Kevin was arriving and was going to repossess his skidsteer, The problem was not the work itself, it was the 20-30mph winds that kept trying to blow me off the rack  and even blew off soffit panels after I put them up. One particularly strong gust blew 6 panels off in one gust and of course one of the panels hit the bedroom window ripping an 8" gash into the screen....frustrating! In the end I got it done.

While Barb was busy inside and I was busy outside the dogs would just sit in the rig and wait for us to take breaks or be done. This is what they looked like before we went out to work a couple of mornings, just a rough life! 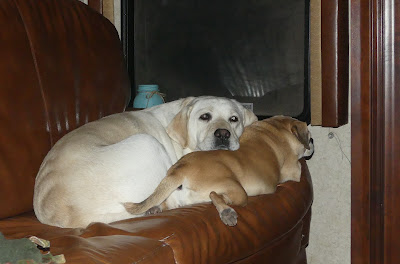 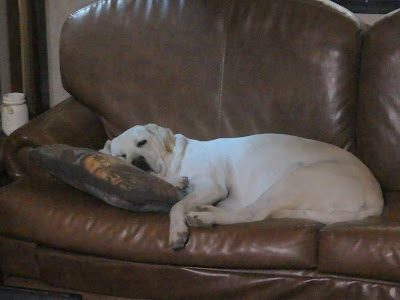 We had ordered some 4"x12"x8' wood from the local saw mill and had it drying in the garage over the past few months. Now that it is drier and lighter we cut them into 42" stair treads! When we are close to finishing the house these treads will be sanded, stained and varnished. 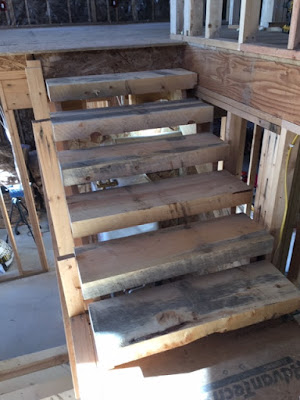 Once Kevin and Cheryl arrived it was like putting it into overdrive workwise. We moved all the equipment over to their place and got to work. They had not been here since September when we did our roof and only had 7 days this trip to get as much done as they could. Barb and Cheryl worked on insulating their bedroom while Kevin and I buried a gas line, installed the barn doors in the stables, worked on the fireplace, framed the upstairs and did some electrical. It was 50 the first day, 40 the second and after that no day got over the low 30's. Chilly to say the least. But we did get a lot done.

Thursday, Thanksgiving, was not a day of rest for us. We worked at our place framing in the corner of the living room for our fireplace! Barb drove to Spearfish on Tuesday (in a snow storm) to pick it up. Our neighbor Doug and his son came over to help us carry it into the house, at over 500#'s it is a beast.
By the time we got the platform built to put it on Dan and Bonnie had arrived and Kevin, Dan and I got it up on the platform. Enough progress for the day, time for turkey!

Thanksgiving and Christmas are two of my favorite holidays of the year. Our Thanksgiving tradition over the years, like many others, is to watch football, eat way too much and spend time with friends and family. There was only two wrinkles in this plan, we have no family in the area and we do not have TV! Or do we?
Barb was able to solve the TV dilemma by calling DirecTV and having them come install a dish on the house. I won't go into great detail about what a fiasco that was but after she was gone an hour I came in the rig to see how it was going. She was on hold and when I asked her how it was going I got an earful! She went told me she had been transferred 5 times, could not understand 1/2 the people she talked too and was getting absolutely no where. This is the tame version of what she actually said to me and a few expletives were thrown in there as well.

Well apparently she was not on hold and the operator was listening to our entire conversation. After hearing Barb's rant she waived the $300 equipment and installation charge, gave her a $70 dollar credit and had the installer out the next day. A supervisor even called to make sure she was satisfied. I guess it pays to rant when you think you are on hold!
Barb cooked a turkey on the Pitboss, made two pies (pumpkin and key lime), and all the fix'ens. It was a great meal and great company. Certainly a Thanksgiving I don't think we will ever forget. It was so nice sharing it with good friends.

Our house is really becoming a home, we are falling in love with it more and more as make progress on each area. We cleared a couple trees in the front that really opened up the view down the valley. One day we had beautiful sunset..... 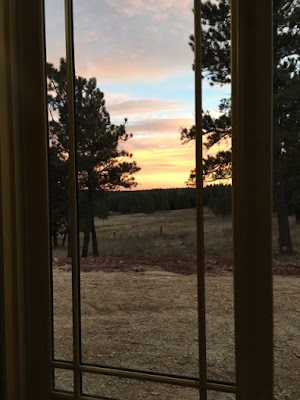 The next day we had an incredible snowscape complete with deer walking within yards of the house! 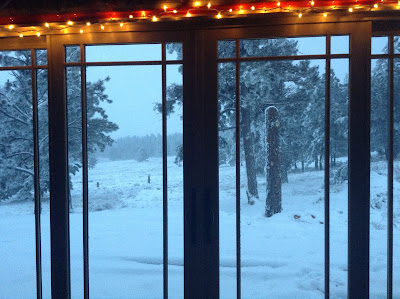 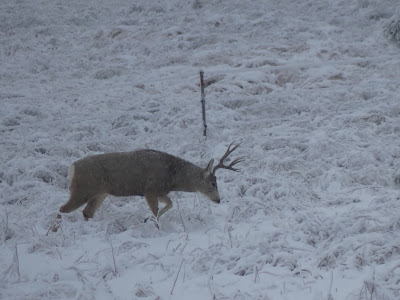 Kevin and Cheryl were supposed to leave Sunday but they closed I90 Friday night and all day Saturday so they thought it might be a good idea to let the roads clear one more day so they are going to leave on Monday. That give us one more day to make progress on both our places. Who knows we may even have our fireplace operational by our next post!
Posted by Jim and Barb's RV Adventure at 7:08 PM