Our Oregon adventure complete, we said our goodbyes to Forrest, Somer and Lily and headed east. Surprisingly there are no straight eastern routes out of Klamath Falls towards South Dakota. Try as we might the only viable route we found took us southeast through Salt Lake City then northeast into Rawlins Wyoming, Casper and eventually South Dakota.
We drove a total of 1,272 miles and 22 ½ hours (10 ½, 8 ½, and 3 ½) over the next three days trying to miss two different snow storms. Our first night brought us to West Wendover, Nevada. The same exact route Forrest and I had taken two weeks before. We stayed in the parking lot of one of the casinos with about a dozen other trucks and RV’s.
The rest of the trip was pretty uneventful with the exception of a cattle drive and a wildfire. The cattle drive was pretty cool and stretched for a mile or more. 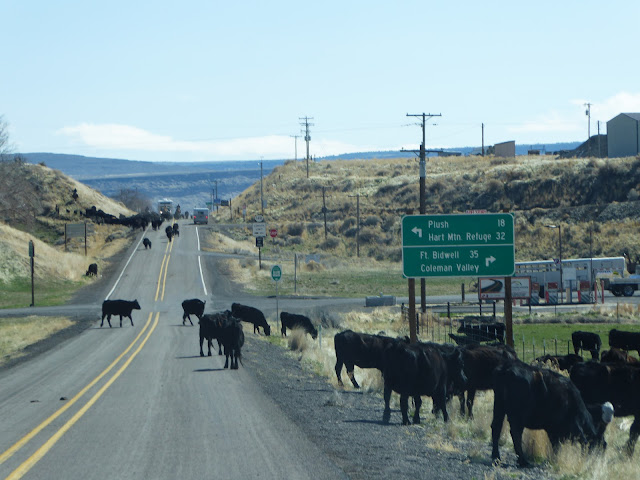 Most of the cattle seemed to know what to do and where to go. The young calves kept the cowboys busy though as they brought up the rear and did not have a clue what they were supposed to be doing. Instead they were running from one side of the road to the other and not down the road like they were supposed to.
From afar the wildfire did not look too big but as we got closer we could see that it had started at an isolated spot near the road and quickly spread from there. There were numerous fire trucks and other emergency personnel there trying to keep it from spreading any further. 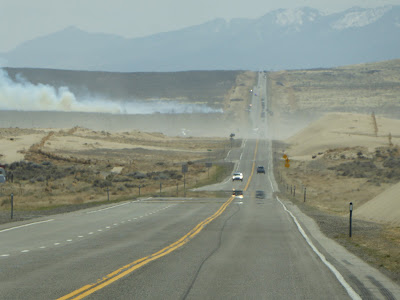 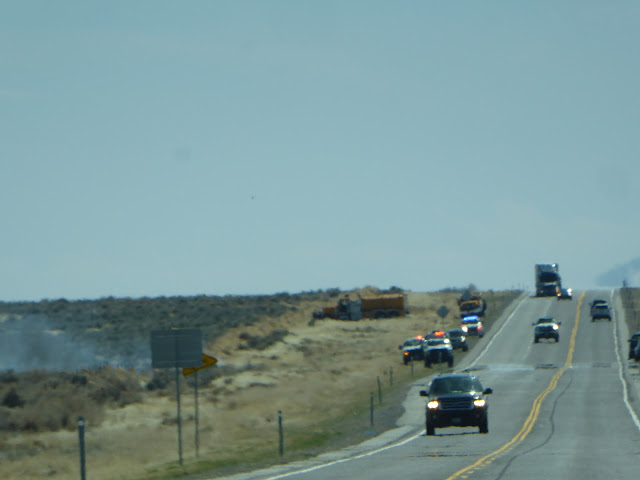 The Walmart in Casper Wyoming is a familiar stop over spot as we have stayed here about ½ dozen times on our way back and forth across the west. They had a significant snowstorm the night before but by the time we rolled in that afternoon the roads were fine. We were now only 3 ½ hours away from our property in Pringle and we had a decision to make. The forecast over the next couple of days called for 5+ inches of snow and temperatures dropping into the single digits. Two things we try to avoid whenever possible. On the other hand we wanted to arrive when the ground is frozen as we did not know the condition of our driveway and parking area and thought arriving when it was frozen gave us better odds of climbing the hill to our RV spot. So do we hunker down for a couple of days and avoid the snow or do we go for it and arrive when there is no snow and the ground is frozen? Well, if you know us by now you know we rarely take the safe choice so off to Pringle we went!
3 ½ hours later we were at the gate of our property and who was there to greet us? Prairie dogs!  We thought we had gotten rid of those last fall! Well we did but not all of them on the neighbor’s property so they migrated west taking advantage of all the recently vacated prairie dog homes. There weren’t the numbers that we originally had last fall but enough to get us a little frustrated.
We were able to get up to our parking site with little problem. The ground was solid up to the point where the top soil had been removed just prior to our RV pad. Once we hit that we started to spin and slide, controllable, but we had to account for a little sliding as we hit our gravel pad. Once we hit that we were fine again.


True to word, the temps started dropping and the snow started falling the next day. Over the next 36 hours we got a little over 5”s of snow. 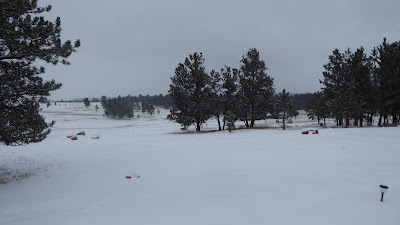 We took advantage of the snow to burn a couple brush piles from clearing our building site.


Thursday afternoon we got a message from Phil and Rudee asking us if we wanted to meet up at Hitch Rail for dinner with them as well as Larry and Sue. Do we want to meet at our favorite bar/restaurant for dinner? Heck ya! Both Barb and I had burgers which were as good as we remember them.
With all the snow on the ground we thought it would be a perfect time to go for a drive through Custer State Park to see some beautiful scenery. 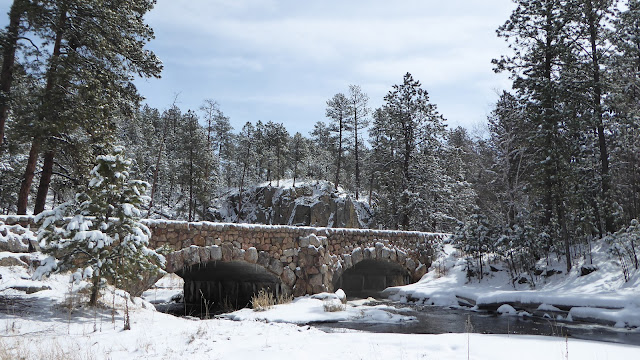 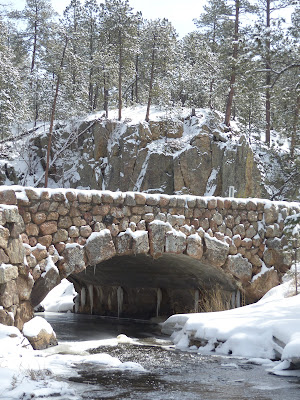 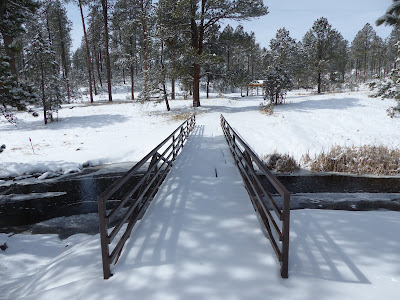 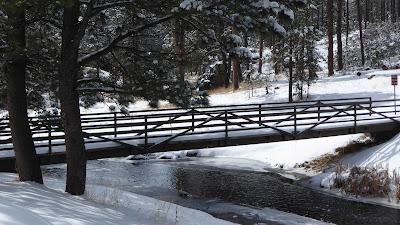 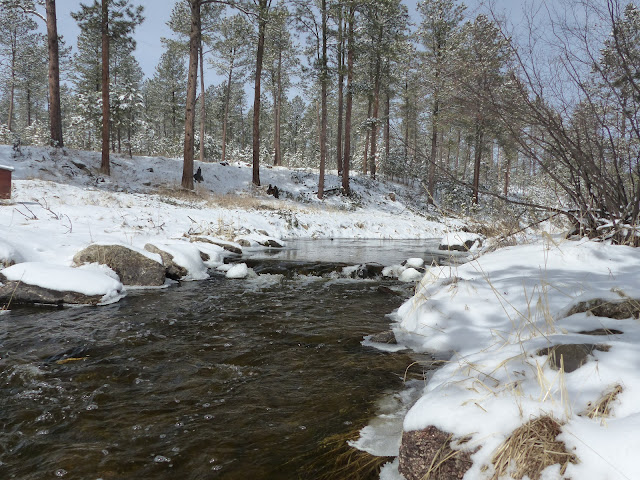 We had heard that three baby buffalo had been born in the past week so we were hoping to at least get a glimpse of one and if we were lucky get some decent pictures. We searched each of the buffalo herds as we passed them but could not find one of these little rascals….until…..we were just about to pull away from one of the herds when out of the brush runs this little baby buffalo. It was as if he/she was running out of the brush yelling “Here I am, here I am!” 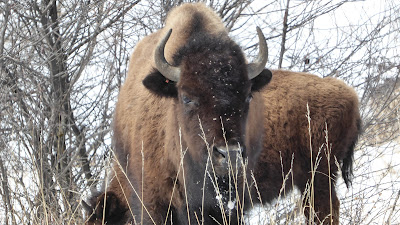 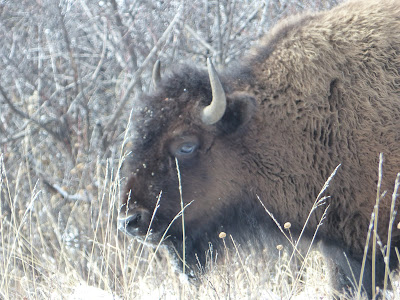 It did not present the best photo opportunities but we were happy to at least see one. We saw a variety of wildlife throughout the park, mule deer, whitetail, antelope, elk and of course the ever present prairie dog.


Evidence of the 84 square mile fire that swept the park was everywhere. Some areas were devastated, some just singed and other areas not touched at all. A lot of the area that was burned was grasslands and that was already starting to recover, much to the delight of the wildlife.
Thoroughly satisfied with our adventure we set out for home and what did we see on our road just before our driveway? Why, it was the Jordan’s! But wait, why is their truck disconnected and the back end of their rig in the road. This can’t be good. As we pulled up we indeed did see it was not good.
The recent snow had made their driveway pretty slick and the ground soft so as the front end of their truck slide off the edge of their driveway, the back tires of their rig sank in the soft gravel. And there they sat.


Luckily the neighbors down the road, Lane and Deb, were there with boards and chains and after much finagling Jim was able to get the rig back on the road and in our driveway where they will park until the snow melts and they can get into their site.
It is really good to be back here and we had an action packed couple of days. We cannot wait to see what the next few weeks bring!

Posted by Jim and Barb's RV Adventure at 8:45 PM