Since being back in South Dakota this week we had yet to see a turkey on our property. They were still all in their winter flocks of 70+ well off our property but when I woke up Tuesday morning and heard gobbling within a mile of our rig I knew I had a chance! I was in the blind 30 minutes later with 3 decoys set out to entice these wily birds into bow range. Over the next two hours I called and called trying to sound like the sexiest hen in the woods enticing the gobblers to check me out. 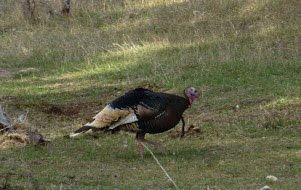 Soon I could hear the gobbling toms getting closer and closer and over the hill popped a hen followed by 5 strutting toms! It was amazing just watching the toms strut behind that hen trying to impress her.
Turkey hunting has been a passion of mine for many years and one of the things that attracted us to this area was the amount of wildlife and one of those was the turkeys! There are several varieties of turkeys across the country. Back in Wisconsin we had the species called Eastern turkeys, this area of South Dakota predominantly has the Merriam turkeys.


What? You thought a turkey was a turkey? There are actually 5 sub-species of turkeys across the U.S. 6 if you count those turkeys who were not particularly discriminant with whom they breed and cross breed.  Over the years I have been lucky enough to harvest two of these sub-species, the Eastern and Merriam, well, 3 if you count the cross bred birds commonly referred to as “Dirty Birds” as they are not really a distinct sub-species yet. All my birds have been with bow and arrow as bow hunting is another passion of mine.
Turkey hunting can be very challenging. At times turkeys can be very appear very stupid, standing in roads or parking lots and standing in the way of vehicles. While other times they run at the first sight of a human over a ¼ mile away. The birds around here are a little bit of both. They will stand within feet of our rig and not care that the dogs are barking at them through the window. But try to sneak up on one out in the woods or prairie and you would swear that they read the memo and know you are after them. Add to this scenario that I am hunting them with a bow and arrow makes it incrementally more challenging as you have to get the birds within 20-30 yards.
As the hen, along with her 5 suitors came closer and closer I searched for an opening in the woods and readied myself for the shot. As the hen passed through the opening at 20 yards I drew my bow back and waited. When the first tom crossed into the opening he was a full strut and I took aim and released the arrow. “Honey, get the grill ready, we are having turkey for dinner!”
Although that adventure went as planned, our big adventure of the week did not. Three weeks ago, a friend of ours Gary Thompson, father to Chad and father-in-law to Michelle owners of Pasha Lake Cabins passed away. We made plans to head to Minnesota on Wednesday, attend the funeral on Friday and drive back that afternoon. Chad and Michelle are good friends and we wanted to be there for them. Unfortunately the weather had totally different plans for us with 8-12”s of snow and 30+mph winds right on our travel route. With weather like that they will no doubt close Interstate 90 across the state. So unfortunately we had to cancel our trip but they will be in our thoughts and prayers.

We intermixed play with the work by tightening about 1/4 mile of barbed wire fence along the back edge of the property, attending to the return of the prairie dogs, taking a load of posts over to Kevin's property and getting out to eat with Phil/Rudee and Larry/Sue to Maria's Mexican restaurant in Hill City.
As we were on our way to Kevin's we came upon a truck parked sideways across the road. As we approached he flagged us down and told us they were doing some blasting ahead trying to get a rock off the edge of the road so they could straighten out the road a little. Soon we heard warning sirens and then the earth shook beneath our truck as the explosives went off.
He let us go ahead and as we rounded the corner we saw the dislodged rock and a blast mat in the road. 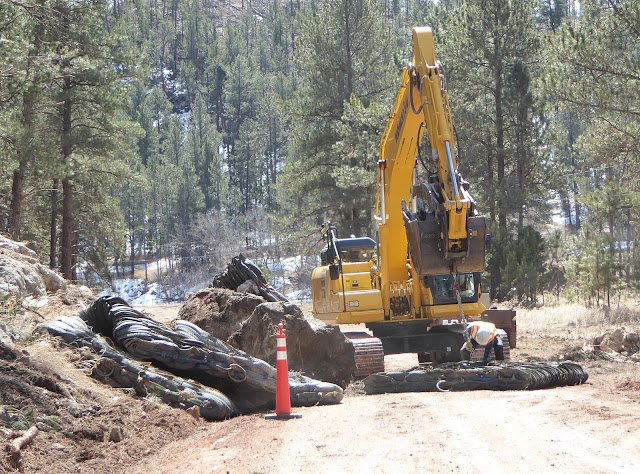 We also went to town a couple of times to get water. Although we have a cistern full of water I need to get a pump setup in place before I can get it out and I want to wait until the freezing temps are done before I do that. So instead we went to the water station in Custer to fill our barrel. Most towns in the area have water fill stations since many of the residents have cisterns instead of wells or rural water. The Custer location charges $0.25 for 25 gallons. 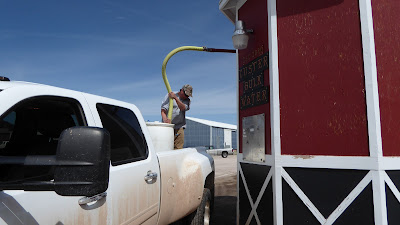 The adventures continued with a trip out to our favorite steam for a few hours of fly fishing. Barb out fished me once again catching 3 to my 1. Two of hers were big enough for the frying pan so we were able to enjoy a nice trout dinner! 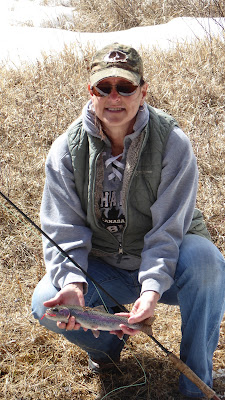 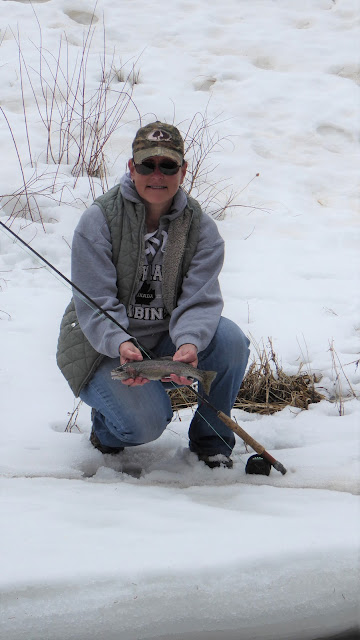 Being a little higher in elevation there was still a lot of snow in the area so much so that there were some ice shelves over the stream. One time I looked across the water and noticed that Barb was on one of these shelves and was actually standing over the water. I debated the pros and cons of telling her. On one hand she was out fishing me and it would make a great video/story if the ice shelf was to give way. On the other hand, I like to eat and sleep in bed…..decisions decisions….. So I did what any good husband would do, I got out the camera to document it should something go wrong! 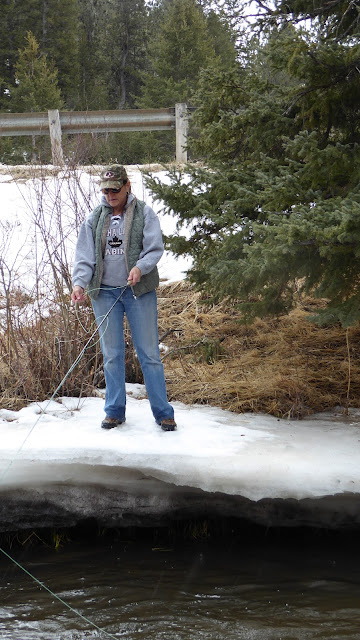 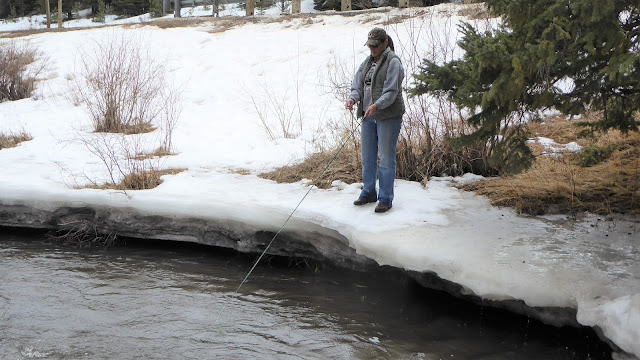 I was going to tell her to about an old indian trick of jumping up and down to attract the fish but in the end I told her she might want to move back a couple steps and once again saved her life.
With my bird in the freezer, it was Barb’s turn to see if she could get one with her bow. Although I cannot see the blind from the rig I could see a group of turkeys headed her way. I counted 48 of them marching down to her location. When she returned to the rig a couple hours later she had a big smile on her face and said that it was a really cool experience. She had turkeys all around her for over an hour. Six toms were strutting their stuff trying to impress the hens and she said a couple were successful and she got a little X rated turkey porn show!
She went on to tell me that a couple of toms were coming within bow range and disappeared behind the blind and when they came out in front they were within 2  feet of the blind, she said she could have reached out and grabbed one! Way too close for a shot so those two went on their merry way. A little later a lone tom came within bow range so she drew back and readied herself for the shot. When it was in the perfect spot she released the arrow and it went just under the turkey. She said it jumped up about 3 feet and got the heck out of there! That was it for opportunities so we will have to wait until another day to try again.

Dakota was doing fine with her bronchitis, she stopped coughing for about a week but then it started up again so she got to go to the vet for x-rays and more testing. They did not find anything additional wrong with her so they put her on more medication and sent her home. The good news is that she lost 3lbs so far on her new diet. When she is resting you cannot tell anything is wrong but when she is playing and active she starts coughing. I am sure this cooler weather is not helping her at all.

True to her word Mother Nature hit us hard on Friday. The forecast was for anywhere from 5-12"s depending on where in the hills you are located. Typically this part of the hills is on the lower side of those numbers so we are hopeful to only get 5"s or so. We hunkered in putting our slides in at night to keep the snow off and only opening two during the day so we could get around the rig. Great day to work on the blog post and the plumbing diagram for the house. 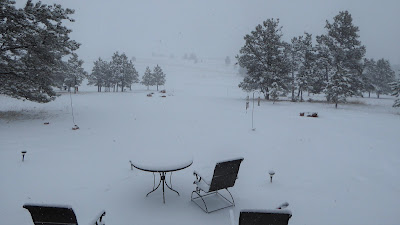 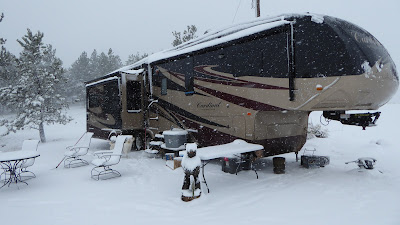 Hopefully the snow ends soon as we have big plans this weekend with friends Dale and Ruth who flew into town for the weekend! (I bet they are glad they picked this weekend to come to South Dakota!)
Posted by Jim and Barb's RV Adventure at 12:04 PM