From Ontario to South Dakota....

When I woke up Tuesday morning it took me about a minute to think about and process where we were. After being up at Pasha Lake for so long I was expecting to look at the window in the bed and see a familiar sight so when it wasn’t, I was just a little confused.

There was a lake outside our camper but the wrong lake. And there was a house. A huge house. 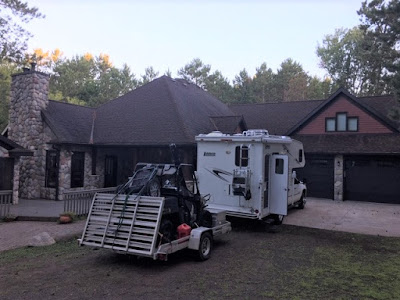 After leaving Pasha we headed for the border which went smoothly. Well almost smoothly. During the routine questioning the agent started asking Barb about her big fish. How does everyone know or why is it assumed that she catches the biggest fish?!?!? Frankly, it is getting irritating!

At any rate, we landed that night in the driveway of our good friends Mike and Mary Jo who have a place outside of Gordon Wisconsin, We have not seen them since we hit the road. What would have made it better was if they were there. You see, they were somewhere in Ontario fishing.

After spending the night in their driveway we were on the road again with two more passengers. An antelope and a whitetail deer that Mike and Mary Jo were nice enough to store for us. Now we were traveling with two dogs, a deer, an antelope, a 40” northern mount and a bear rug. The last two were being stored up at Pasha for the last couple years and it was time for them to come home as well. To say our little camper is getting crowded is an understatement!

Our next stop was at Doug and Connie’s outside of Somerset Wisconsin. Coincidently, Doug is the taxidermist who mounted several of the aforementioned mounts. We spent the afternoon visiting with Doug and Connie before going to dinner at Big Guys BBQ Roadhouse.

An interesting side note about Doug and his son Brian. They are working on developing solar water irrigation and purification systems for remote African villages. They have several demo units set up on their property to show investors.
The following morning we were off to my sisters in Balsam Lake. Where we got caught up before heading to The Thirsty Otter for their Thursday night rib special. Ribs two nights in a row? You bet when they are that good! We had a great time. One of us a little too good of a time as Barb paid for it later that night and most of the next day!

Friday was errand day. Our first stop was the ATV repair shop where we had dropped our Polaris Ranger a few days earlier for some repairs. Oh boy, was it in rough shape! It needed a new clutch, belt, ball joints, U joints, A arms and some welding for a cracked differential mount. 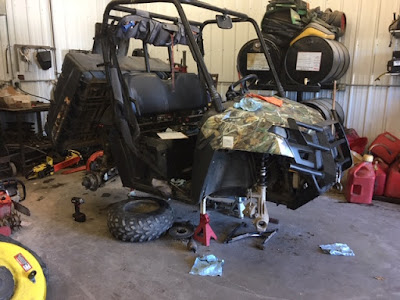 As you can see it was not ready yet. The other reason we stopped by was to drop off our flatbed trailer as we had worked out a deal for a new enclosed trailer when we dropped the Ranger off!  We knew we wanted one and when we were offered a deal on one that some hail damage on the roof we could not refuse!
Later that afternoon, with our wallets a lot lighter, we picked up the Ranger, arranged everything in the new trailer and we were off to dinner with 5 of my brothers and sisters! It has been one and a half years since this many of us have gotten together.
It was great seeing everyone and getting caught up. It was over too soon and once again it was time to hit the road. We got back to our truck and trailer. Flat tire on our new trailer! The problem was easy enough to see as there was a screw staring me right in the face. Thanks to a plug kit and a portable air compressor we were on the road within 30 minutes.

I will pause here to talk about the results of my “skinny jeans” experiment I talked about in our last post. After asking several women if they were wearing their skinny jeans I would categorize my results as “inconclusive”. There is either something in the water in Wisconsin or I stumbled upon a Tourette’s convention as each of the women I asked scream expletives at me and walked away immediately upon my asking one simple question.  At any rate, further analysis is needed.

Now the long trek back to South Dakota. We stopped several times over the next 12 hours and 700 miles to check the plugged tire as well as how the hitch was holding up with the new trailer. I am a little leery about the hitch extension on the truck as it is just a 4’ extension that bring it beyond the back of the camper. All the literature and reviews say it will hold up to 600#’s tongue weight and 6000#’s towing and the online reviews have been positive but I was still a little leery. I must say I am very impressed, it seemed to take the bumps on I90 and looks as good as new!

When we arrived in Pringle we went straight to Kevin’s house as he was wrapping up a weeklong visit and was heading back in the morning. He had invited Dan and Bonnie over for dinner as well so it was great to hear what has been happening in the area since we left. We spent the night in Kevin’s driveway and pulled into our place at 6:30am Sunday morning. Whew! That was a lot of stuff in just a few days.

Everything was as we left it at our place. (Thanks to the Jordan’s who watched over our big rig and filled several bottles of propane). Now it is time to get back into “Building mode” as the steel for the roof and the shower/tub surround arrives tomorrow! Oh, and did I mention we have visitors coming as well?!?!? Very “special” visitors…….

Posted by Jim and Barb's RV Adventure at 7:10 AM