This week marks the 2nd full month here in Canada, the weather is warm and the wild flowers are blooming! It is hard to believe that merely two months ago we were complaining about the ice and cold and rejoicing to the fact that there were no bugs. Now we are cursing the bugs and wishing for colder weather. We actually had a reprieve this last week when the temps in the afternoon only reached the mid 50’s which meant the nights were in the 40’s which in turn meant no bugs! People just don’t get it when I say the bugs are bad, the only thing you can relate it to is when you think the bugs are bad in your particular location. When the bugs were bad in back home in Wisconsin, you would have 10 or so mosquitoes bugging you, up here you will have well over a hundred bugging you and may have 10-15 on one arm! Then you add in the black flies and no-see-ums and I can see how someone could go seriously nuts without protection!
This week Barb and I started tending to the bear stands as bear season opens in a little over a month. We spent several days out in the bush looking for bear sign, clearing existing hunt sites and cutting fallen trees off logging roads that had not been used since last fall. Some people may think we are nuts but those are actually very enjoyable days, getting out on the 4 wheeler and just exploring. We did not see any bears this week but we saw sign a plenty, in a future post I will take pictures of some of the sign so you can get an idea of what we look for. The mother grouse and chicks are still plentiful on the logging roads, I think they go there to eat the flies and bugs in the short grass. Probably the coolest think I saw this week happened when I was out by myself doing some bear scouting. I was driving the 4 wheeler  down a logging road through an 3 year old clear cut when something caught my eye as I drove by it. I stopped the wheeler and walked back to find a sandhill crane chick hiding in a clump of grass. The clump of grass was smaller than the crane but it thought it was well camouflaged and just sat there while I took a few pictures.
Barb and I also went out on a search and rescue mission this week. Well actually, it was only a two person search and rescue (Barb and I ). There was a husband and wife couple in their 60’s in camp from Fort Worth Texas. They had a really nice canoe set up and liked to fish remote lakes, well one morning I woke up and saw that they were not there and  had not come back the previous night so I told the resort owner that Barb and I were going to drive to the lake that they were fishing to see if we could find them. The lake is 20 kilometers up the road and 5 miles back on a logging road. We were about ½ down that logging road and there they are walking towards the main road. We did not have pizza (see blog Rain, Rain and Helicopter Rides) but we did offer them a bottle of water and a couple of granola bars. They explained that when they were done fishing the day before they had backed their truck close to the lake to load their canoe and equipment and it sunk in the mud. They tried getting out for a couple of hours but when it started getting dark they knew they were in for the night, so they tucked themselves into their truck and spent a fitful night swatting mosquitoes that somehow were managing to get in the truck. I had brought enough gear for a major rescue mission but luckily only had to use a tow strap and we were all on our way back to camp. I wanted to take a couple of pictures of them and their stuck truck but Barb did not think it was a good idea.....although they were in good spirits, I don't think they wanted their pictures taken.


Speaking of fishing, we got out a few times last week, one day Chad and I went to Alexander Dam in the town of Nipigon for Brook Trout and Lake Trout where we did not do very well. Another time Barb and I went out on Pasha Lake for Lake Trout and got skunked……. Those trout are very finicky! Truth be told, we did not fish too seriously on Pasha, it was more of a relaxing afternoon on the lake.  We also got out to Onaman were we spanked the walleyes. When I got to one of our favorite fishing areas  there were several pelicans about 10 feet from shore feeding, where the pelicans feed must mean there are baitfish and baitfish mean walleyes are probably near. So we drifted over that way, (the pelicans were none too pleased) and started fishing. By the end of the day we must have caught 40-50 each in 4-12 feet of water. The biggest was of course caught be Barb coming in at an impressive 29”. 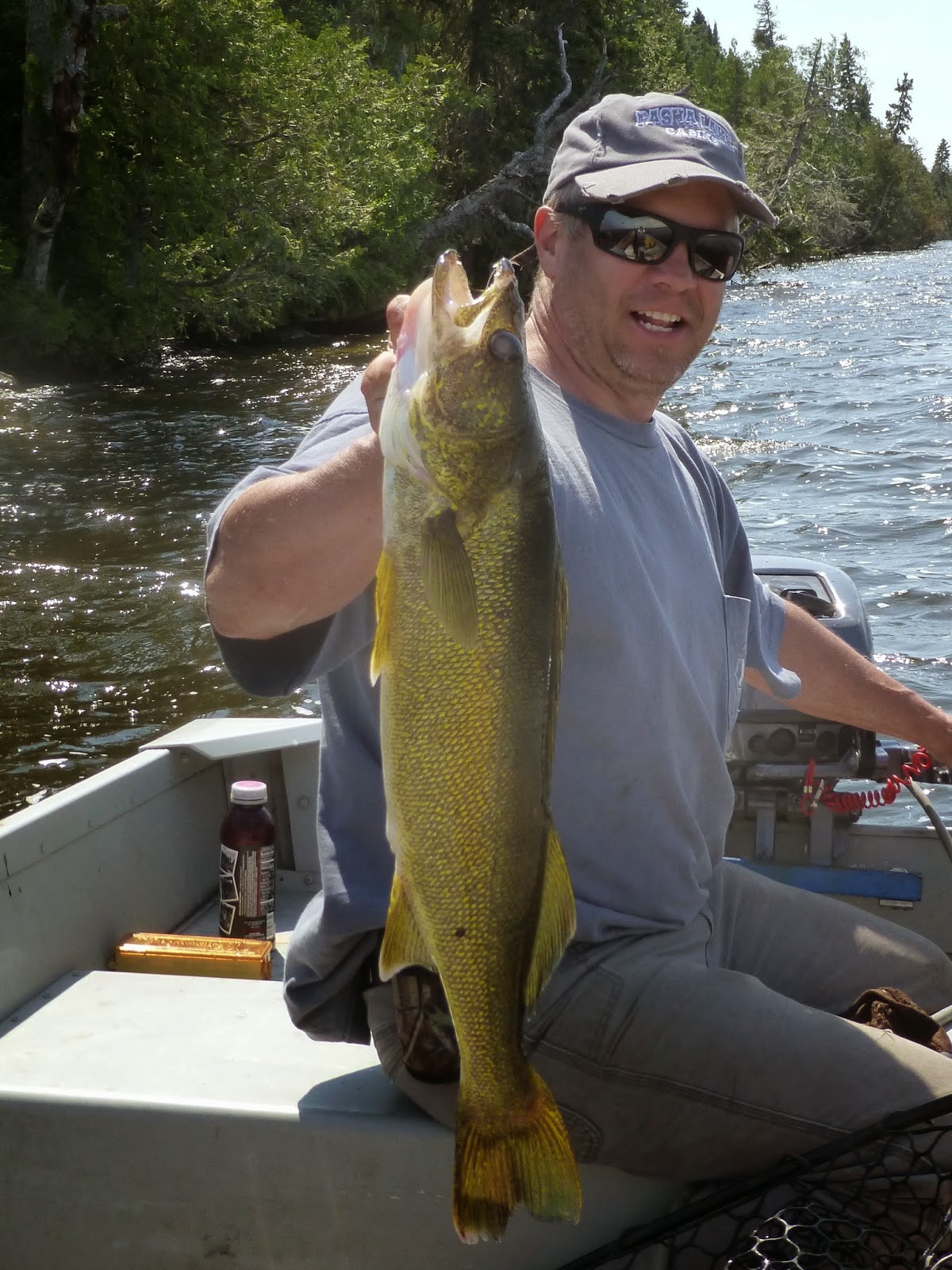 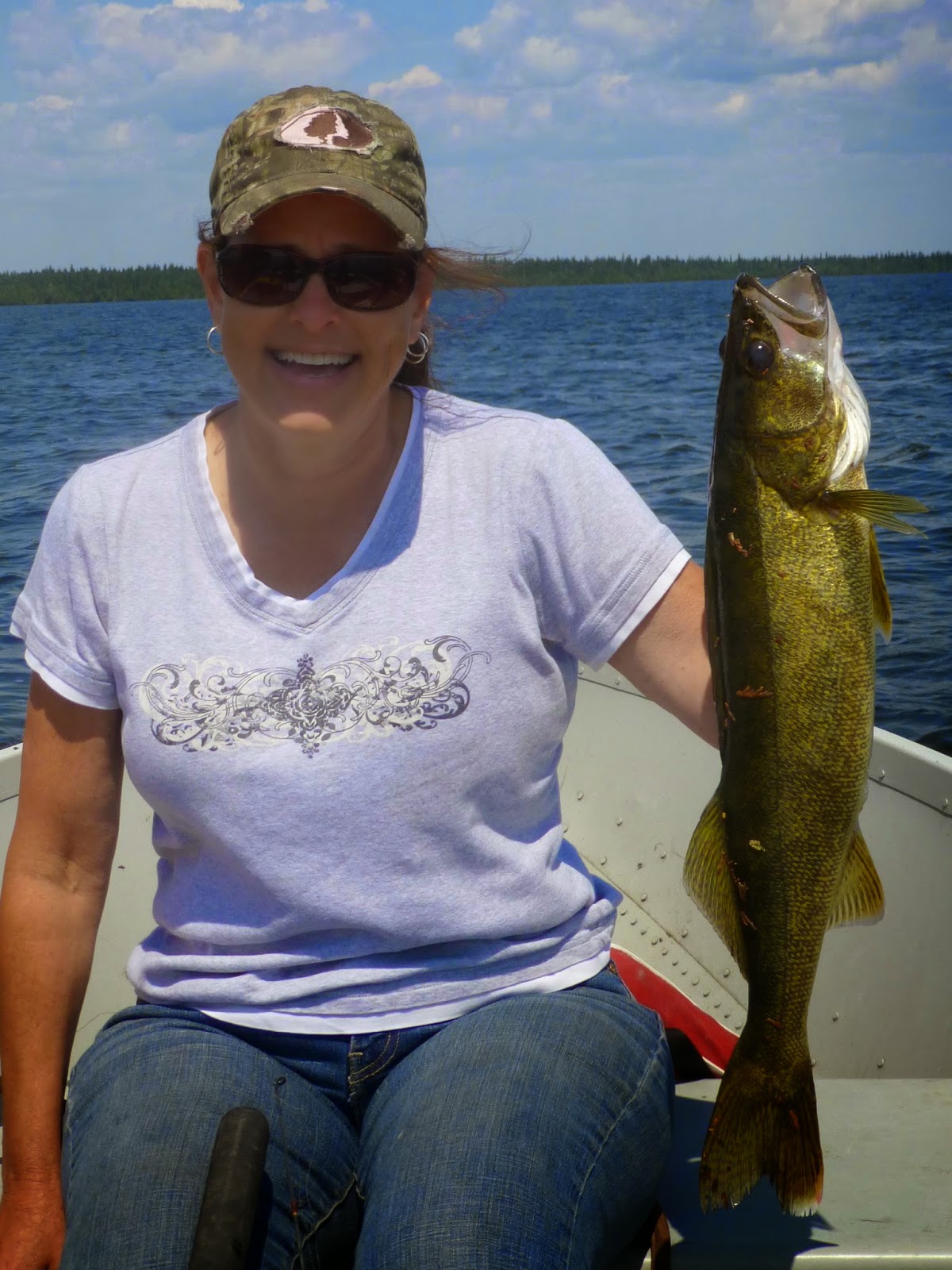 This week our goal is to finally figure out these Lake Trout and get one in the smoker…..stay tuned!
Posted by Jim and Barb's RV Adventure at 6:21 PM 4 comments: