Birthday surprise? But wait, Barb’s birthday is in March and it is like….September… That may be true but as some of you know Barb had a milestone birthday this year (I promised her I would not divulge what milestone it is however) and since we were Amarillo on her real birthday, we really did not get a chance to celebrate it. In fact, I did not even get her a present. A fact I have been reminded of more than once over the past 6 months. Every time she would buy something I would say “Happy Birthday!”. When she bought the truck camper I said “Happy Birthday!”. “Nice try" she would say, "but I did the research, went to Salt Lake to pick it up and wrote the check, this is not a birthday present” Pretty much the same scenario when she bought the new Ranger……

I needed to rectify this situation soon as my birthday is fast approaching and if I wanted any kind of present I needed to right this wrong. So when we made plans to come out to Forrest’s knowing Jessica and her family were going to be there I put a plan into motion. A surprise birthday party!
Next I had to come up with the perfect gift for her. It had to be something she just would not buy on her own and something that would be a total surprise. After thinking long and hard I came up a couple of gifts that would fit the bill!

So with the help of Shane, Jess, Forrest and Somer we put our plan into action. Jessica’s role was to get Barb out of the house. So, she and the kids went to Crater Lake to hike the Watchman Trail. They had a great time and saw lots of very cool scenery.


Forrest, Shane and I went to the store where we bought party favors and the ingredients for one of her favorite meals; Ribeyes, shrimp and lobster. Once we got home, Somer and I made Rumchata cupcakes while Forrest and Shane decorated. The scene was set, the presents wrapped, we just need to wait for our guest of honor.

At the appointed time Jess, Barb and the kids arrived home. She walked in saw all the streamers and balloons and had no idea what was going on. It was not until we put a hat on her head and shouted “Happy Birthday!” that it dawned on her that this was for her.

Shane did an awesome job cooking all the food and we absolutely gorged ourselves to the point of discomfort. Then it was gift time….. So what do you get the woman who could possibly have everything wants? A new spotting scope! A Vortex Razor HD 27 60x85 to be exact! Oh and a couple of trail cameras. Just want I….I mean SHE always wanted!

We also got her some denture cream and some nighttime diapers just to bring everything over the top. 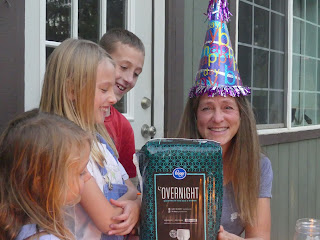 You should have seen the look on her face when she opened her gifts. I really don’t know how to describe it. Sheer joy? Surprise? Shock? Or something totally different…..

And no, those were not the only gifts I got Barb, the biggest gift was a metal wall sign for our place back in South Dakota. It actually came in two parts; the main sign which is about 3’ tall and 5’ wide. It was too big to bring so I showed her an image of it. 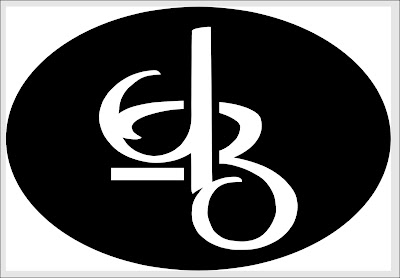 And the cut outs from the sign which we will hang somewhere as well.

Each of the kids got her gifts as well, in fact Jess had booked a zipline adventure for Barb on Thursday morning.

Thursday morning Jess and Barb were off bright and early for their zipline adventure. There were a total of 9 lines one of which was 1200’ and another was 1400’. It also included some repelling and suspended bridges as well. They said it was a lot of fun and it was something she has wanted to do for a long time. 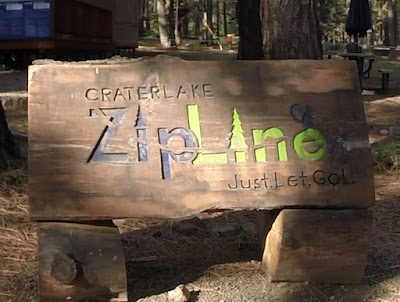 We got out to Crater Lake as a group one time as well. We had not been here since March of ’18 and boy, what a difference!

One of our goals on this trip was to get some family pictures as it had been almost 4 years since we have all been in the same spot!
We hiked the Plaikni Falls trail which is about one mile each way and is kid friendly. 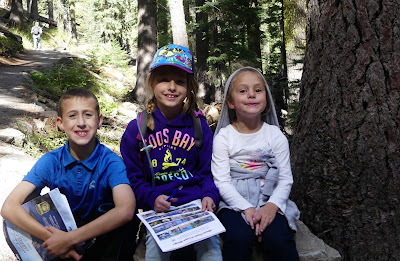 Time for one more family picture at the falls. 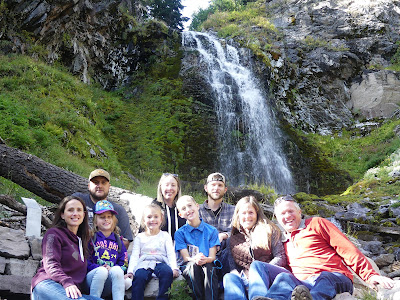 Then I tried to get a picture of just the falls..... 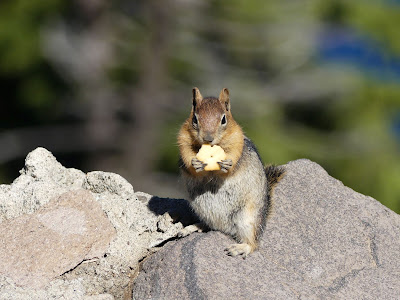 We had a full week of other activities including Lily's soccer game (Somer is the coach), a visit to the train museum and lot of trampoline fun! 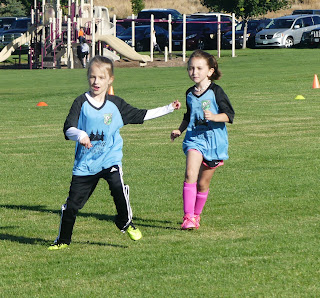 Friday afternoon Barb drove Shane, Jess, Dylan and Kendall to Medford where they caught a Saturday morning flight back to Pennsylvania. We had a great time and we are going to miss them all. We are still here for a couple more weeks but things are going to quiet down with less bodies around and Forrest and Somer to head back to work.

Now if I can just talk Barb into letting me use her spotting scope!
Posted by Jim and Barb's RV Adventure at 8:10 AM 27 comments:

There are definite advantages to driving the pick up camper over the 5th wheel. Even with the trailer in tow we are much more maneuverable. You just cannot pull over on a whim and you always have to be careful which gas station we pull into while pulling a 40’er.

But with the pick up camper we were able to swing right into the parking lot of our favorite Chinese restaurant in Casper, WY.  We have not had it in quite a while. In fact, the last time we had it was when Jim and Brenda were in the area and brought us back an order of walnut shrimp last year! 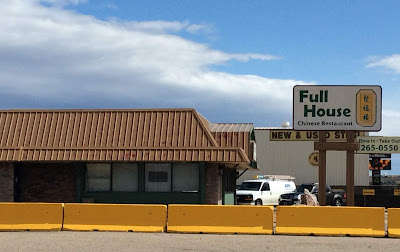 We went a little overboard ordering 5 entrees. I guess that is what happens you cannot decide what to get! We had lunch and dinner the next three days and were still not tire of it! 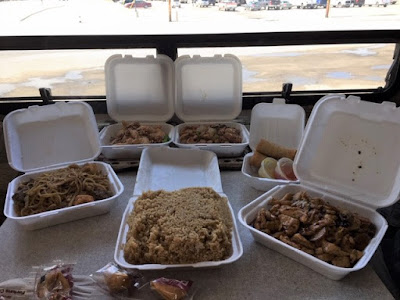 We drove 7 hours and spent the night at the Walmart in Rock Springs Wyoming. There was a few several other overnight campers there, some truckers and a couple long term residents.
They are so hospitable there, in fact, when we woke up we found that someone had left a glass of apple juice right outside our camper for us! 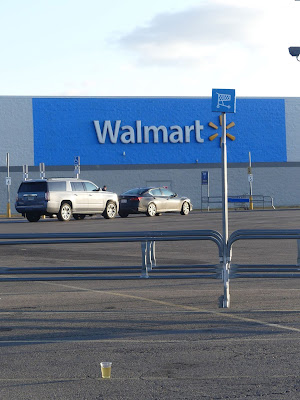 Barb and I were not that thirsty so we left it for the next person who arrived.

Driving west out of Casper, into Utah and eventually into Salt Lake we forgot how beautiful that area is.  The mountains, the rivers and the overall landscape are just incredible.

The 200 mile drive on NV/OR 140 from Winnemucca Nevada to Lakeview Oregon is one long  desolate stretch of road. The only thing that saved us was that we were playing the “Antelope Game” across the desert. For those of you don’t know what that is you will have to ask Dino, he is the one who told us about it. 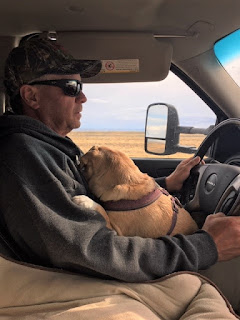 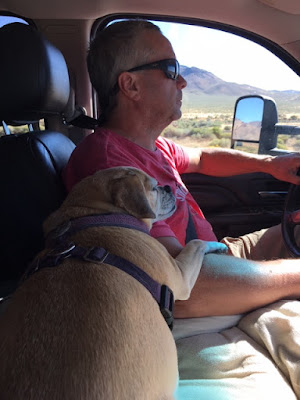 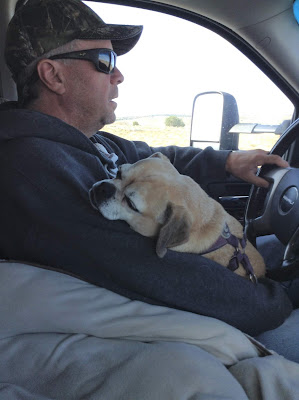 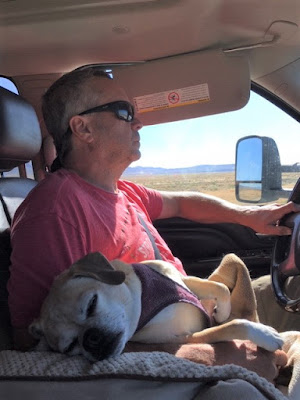 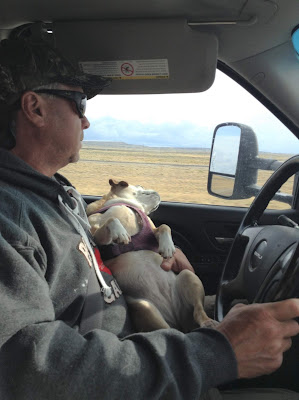 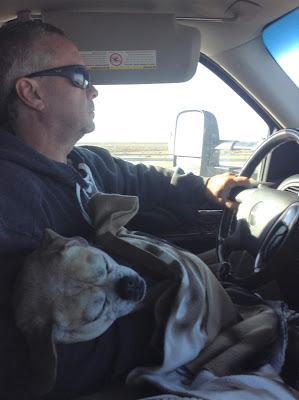 When she was not sleeping, she would just sit back and pass the time reading her book. 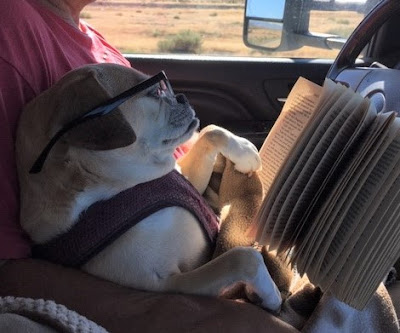 The Virgin Valley Campground has about 15 spaces. Most were filled but we were able to find a spot without a problem. They even have a camp host there! 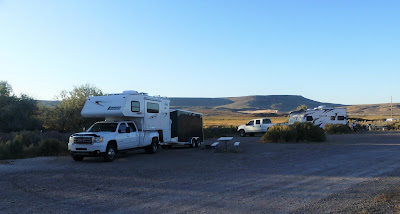 If we were not on a mission, we would have taken advantage of their 14 day stay policy. Next time. We loaded up the next morning and finished our 5 hour drive to Klamath Falls and pulled into Forrest’s driveway about 1:00pm.

Forrest, Somer, Lily and our son-in-law Shane were there to greet us. We have not been there since April of ’18 and we were again in awe of what a great place Forrest and Somer have.
.
Shane had flown out from Pennsylvania several days ahead of Jessica and the kids to do a little elk hunting. The next day we worked on the front deck to strengthen in up a little.
Forrest also went up on his roof to take care of a few wasp nests up under the eves. One thing one does not consider when buying an A-frame is how to do roof work. It was sketchy but both he was harnessed in and the ladder was tied off! 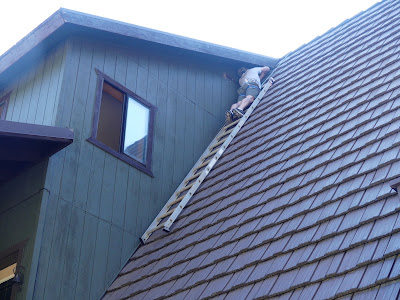 Meanwhile Somer and Lily were in the kitchen making cookies! 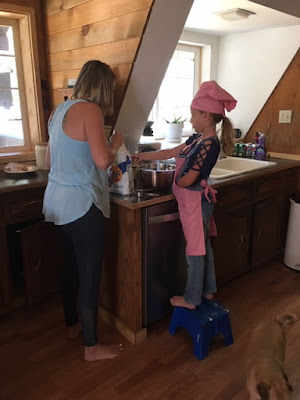 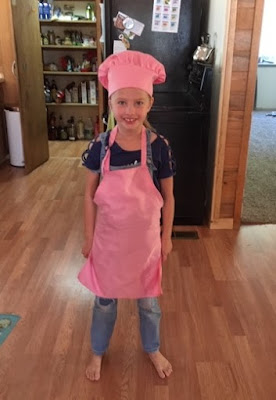 Daisy and Dakota were happy to see thier cousin Jack..... 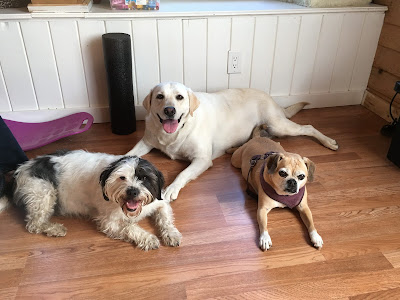 So far our hunting adventures have been unsuccessful. I have a bear tag, Shane has an elk tag and Forrest has a variety of tags. We are seeing some beautiful country though!

Forrest and I explored the area above his house with the 4 wheeler, you can see forever up there!
When we were on our way up I got some pretty good shots of a Golden Eagle with some kind of rodent in its mouth! 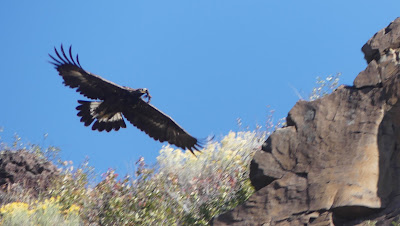 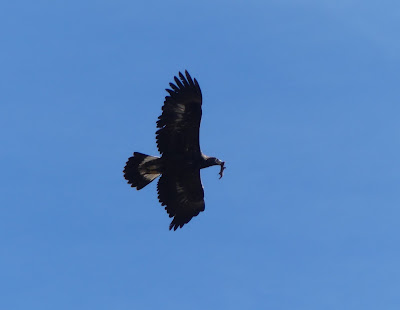 Jessica and the kids arrive soon, then the fun will really begin!
Posted by Jim and Barb's RV Adventure at 7:59 AM 19 comments: