We had more visitors! Three months with no visitors, in the past 2 ½ weeks we have had three different people come and see us. After my brother survived his week, my sister Judy and her husband Mike arrived for a few days followed by my friend Joe.


I was a week of firsts for Judy while she was up here……. she caught her first walleye, went on her first bear adventure and went on her first geocaching adventure. We fished with Judy and Mike on three occasions catching a number of walleyes and northerns. The biggest walleye was 24” (caught by Judy) and the biggest northern was 36”. Mike is an accomplished fisherman having been on several out of state fishing trips. He said he has never had fishing this good on any of his previous trips where he caught the number and size walleyes that he did. Every time I looked over at his boat all I could see is Mike with a big smile on his face. Judy on the other hand has not been fishing very much at all but she was catching them like crazy!

The funniest moment of the week occurred one day when we were out fishing. You see, when we got to the lakes I would drive around and find the fish on the fish locator, drop a marker buoy and tell Mike and Judy to fish by the buoy where they would immediately catch fish. Each location we would go through the same routine, find fish on the locator, drop a buoy, they would fish there and catch fish…. This went on each day and on the third day Judy says to me……”Why do the fish like the buoys so much?” I was like……excuse me? And she said, “What attracts the fish to the buoys?”  Mike and I were laughing so hard, we about fell out of the boat! You could almost see the light bulb go on above her head and she said….”I am so stupid!”

Another first occurred for Barb and I while we were fishing the other day……while we were fishing, we both hooked into a fish at about the same time. Now this has happened several time before and is not really a big deal, but in this case…..we had hooked the same fish!
After hearing my brother Bob’s tales of prepping the bear hunting sites, both Judy and Mike wanted to go with me. Judy went once while Mike kept me company twice. Although we never saw any actual bears, Mike got to go on one bear recovery and we saw lots of sign of bears, moose, wolf and grouse. We also got some really nice trail camera photos of moose at two different sites and the first ever bear-selfie! 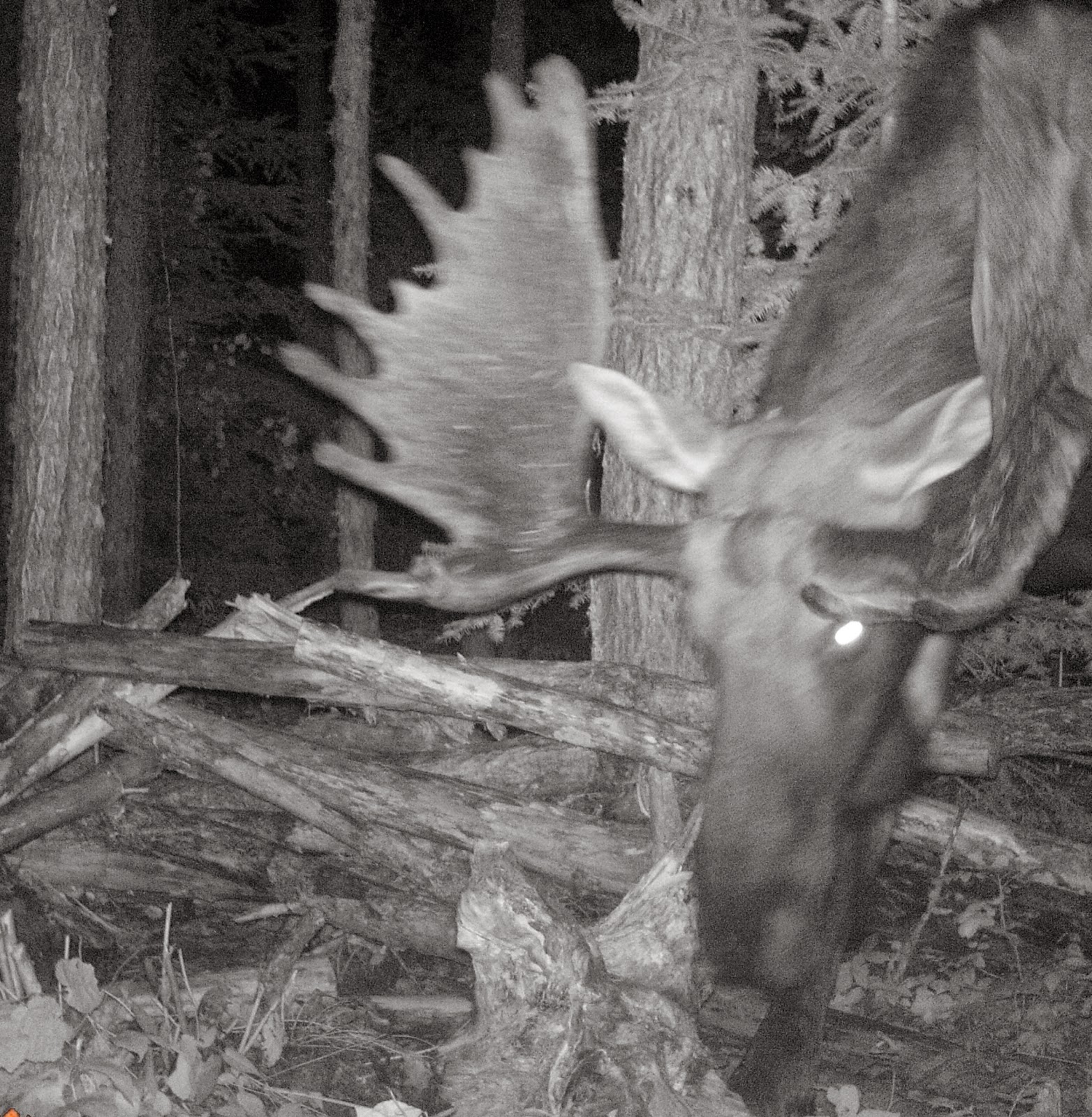 On one of our non-fishing days, Judy and Barb decided to try and go find a geocache on a nearby lake. So Barb loaded the coordinates into her GPS, hooked up a boat to the 4 wheeler, put on a motor, got some gas and away they went out into the bush. They came back a couple of hours later with tales of their success! Once they launched the boat into the lake they motored in the direction the GPS told them to go, once they got close they rowed along a rock wall looking for signs of the geocache. Judy was the first to see an unusual rock on the wall. Once they rowed closer they saw that the rock was covering a hole and sure enough, behind the hole was the geocache container. Inside was a pen and paper, it had been placed there in 2008 and last found in 2012. Barb and Judy added their names to the list, replaced it and motored back to the boat landing. There is one more in the area that we are going to try and it before we leave for the year.

Speaking of leaving for the year, after 4 months here, we are planning our exodus. The weather has started to turn, today it was a high of 37 and rained all day….time to get out of here. We are leaving next Tuesday and headed to northern Wisconsin for a couple days before we spend a week in Minnesota visiting friends and going to the doctor/dentist. Before we leave, we are having one more visitor, a former neighbor from Wisconsin is coming up to fish for a few days. We are really looking forward to seeing him and showing him some of our fishing hot spots!
Posted by Jim and Barb's RV Adventure at 5:01 PM 1 comment: