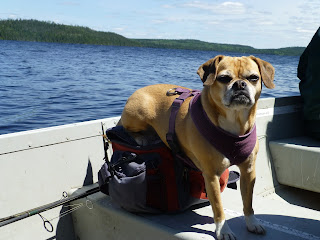 
While she was down there she was able to visit some friends and do some work. Also, the check engine light came on with a message about the diesel exhaust fluid being low. The light stayed on even after she filled it so she took it in to have it looked at. It ended up being a couple of sensors to the tune of over $800 plus labor! Luckily, it was all covered under our warranty and she was good to go. I am glad this happened while she was in the states and not when we were pulling the rig down the road..
Posted by Jim and Barb's RV Adventure at 7:17 AM 7 comments:


Late May, early June bring a lot of changes to the Ontario landscape the birch and poplar trees are budding, the grouse are drumming and the mosquitos are humming. That’s right like an annual passage, mosquito-geddon has arrived in Ontario. I am not talking a few annoying buggers that you can swat away and ignore, I am talking hundreds on the mini vampires that swarm you when you walk out the door. As a matter of fact I think they are conspiring together to see how many it would take to actually lift you off the ground and carry you away. Poor Daisy has learned some interesting new moves as she tries to scratch some of her more sensitive areas that the mosquitoes seem to favor. Two of my favorites are ones that I refer to as “the belly crawl” and the other one I just call “the sit and spin”


Since these nasty little creatures seem to be constantly on our minds this time of year I thought I would dedicate this blog post to how we pest-proof our rig here in the north country in an attempt to keep them out.  Our first line of defense for our rig is our screened house that attaches to our awning. Although it is not totally bug-proof it significantly decrease the number that sneak in when we open up the door. The next step in our exterior defense is to seal the slides. I have yet to see a slide that is totally bug proof. There are a couple of small spots on ours that you can actually see outside. To close these up we use blue painters tape on the inside and out to plug up these entry points. I have even taped a few of the slider windows as there is a little gap between the window and the screen that they might be sneaking in from.


Next up are the fogger and mosquito coils. Although we don’t use them daily, we will use them when things get out of control in the screen house. Although both are effective I actually think the coils work a little better than the fogger.
Even with all this we end up with dozens of invaders each day and on days when we are in and out a lot I would not be surprised if there 50+  in the rig at a given time. Our main defense inside a battery operated zapper shaped like a tennis racket. There is a weird sense of satisfaction when you see the spark as another one spirals to the ground. On really bad days it is not unheard of to vacate the trailer all together and I will hit it inside with the fogger. (Kids do not try this at home). Last but certainly not least is the box fan in our bedroom. After Barb does her final assault with the zapper before bed we run for the bedroom, shut the door and turn on the box fan which blows on our heads to keep them off while we sleep.

Mosquitoes are not the only invaders since we arrived. Some of the local mice have decided that it is a lot drier and warmer in our trailer than the abode they have been living. In an attempt to keep them out I have sealed all the access points I can with expanding spray foam. We also use Fresh Cab in the belly and in some of the access to the ceiling. I really don't know how effective it is but it allegedly has a smell that mice cannot tolerate. Since using it I have not heard one running in the ceiling panels and the mouse trap in the belly has been empty. I recently installed LED lights around the base of the trailer as well. I have read in some forums that the mice do not like to cross these. Inside the rig we have a couple of mouse traps and glue pads tucked away in the back of cabinets where they tend to travel. The glue pads have worked better than the traps but a word of caution….. check the traps frequently but if you forget for a few days and catch one the smell will remind you!


Last week one of the best walleye lakes in the area opened up. Onaman Lake is a premier walleye lake in the area and is only accessible by air or a mile and a half walk. However resort owners with boats on the lake are allowed to use a 4 wheeler to get their equipment in before the season opens. Chad had yet to get his motors in so I volunteered to help him the day before the season opens. I cannot wait to get in to fish it!

Barb recently discovered the most effective way to get away from them….. she left for Minnesota for a few days to visit a friend and follow up on an exciting project she has been working on. More details on that in our next post!
Posted by Jim and Barb's RV Adventure at 1:58 PM 17 comments: