Friday, December 26th started out as normal day, we spent the morning with the grandkids and got the rig ready for the next leg or our journey. We left Salt Lake at about 1:00pm destination Cedar Pocket in the Virgin River Recreation Area. Little did we know that the day would include a terrible tragedy! About an hour south of Salt Lake it began to snow, and snow, and snow. As we began climbing a few passes, there were a few areas where the snow covered the road and I had flashbacks to one of our first adventures "Class of 2014 Graduation". We, and many trucks had slowed down to 45mph to climb a few hills and as we approached a particularly slow truck right at the 6,600 foot summit I move over into the left lane to pass is when it happened…… there in the middle of the left lane was a Christmas Elf! There was nothing I could do, you don’t dare swerve on a snowy road. I just gripped the wheel and hope for the best but I heard the sickening “thud thud”. Barb said “What was that?” “A Christmas Elf, I just killed a Christmas Elf” I replied in terror.
Sickened by this unavoidable tragedy we continued on for an hour or so until we needed fuel. We pulled into a truck stop, I fueled up while Barb took Daisy for a walk. She returned with a look of horror on her face and said “There are parts of the Christmas Elf stuck to the rig!” I went around the other side and sure enough there were elf parts stuck to one of the jacks! The only thing we could figure out was Santa was flying over the pass, blinded by the snow storm and had to make a sharp turn to avoid hitting the mountain. This poor elf, drunk from a little too much Christmas Nog lost his balance and fell out of the sleigh and well……you know the rest. I can only hope that Santa does not find out it was me but just in case, I am going to be super nice this year!

We had never been to this recreation area and we were pleasantly surprised by the size of the sites as well as the quality of the restrooms. A $8.00 for the night we were very happy with this stop.
﻿ The next day, we continued our journey south into Las Vegas where we stopped for a RV/truck wash as the rig got very dirty driving through all the snow and slush. From there we entered California and eventually back into Arizona where we ended our day in Lake Havasu City at a BLM camping area with about a dozen other rigs. One of the harder things to do when boondocking in a new area is finding a suitable site. We have done some research prior to leaving Salt Lake but until you get to the area you don't really know the terrain, whether  our rig would fit or if the sites in the area we picked were open. As we drove through the area we thought had suitable sites we saw several other big rigs out in the desert so we pulled over and walked the area. As luck would have it there were a couple sites that would accommodate us and we pulled the rig into one. There are pros and cons in boondocking near other campers. There is safety in numbers and we felt safe leaving our rig there while we explored. The down side is that you have to put up with the off road vehicles driving by and the noise of the generators at night. As far as campsites rank, it is pretty near the bottom but warm, sunny and free! We stayed for two nights exploring the area for future visits.

We did get on one hike while we were in the area. The SARA Wash Crack in the Wall trail is a 3 mile slot canyon trail where it narrows to arms width in some areas and has several drop offs that need to be negotiated. Daisy was having a hard time with several and we had to "repel" her with her leash. She was none to happy about that! There is one particularly steep drop off of about 7' that had a kind of smooth rock slide from top to bottom. When we got to this slide Barb went first. Thinking she was Super Women she sat on the slide and away she went! When she hit the bottom she swore several times and hopped away from the rock. Evidentially, when she hit the bottom her ankle buckled and shot pain through her body. I made it down a little more slowly bracing myself with my feet on both sides of the slide. We then sat down to assess the situation. Now neither Barb or I know a lot about physics, heck, we don't even understand E=mc^2 but we think the ankle buckling had something to do with mass, velocity and the hard ground. Whatever the reason she said she could keep going and walk it off but after another 1/2 mile I could see she was hurting so we headed back. When she got home, we put ice on it and it started to stiffen up. She needs to stay off of it but Barb does not do well at sitting down so we shall see how the next few days go. 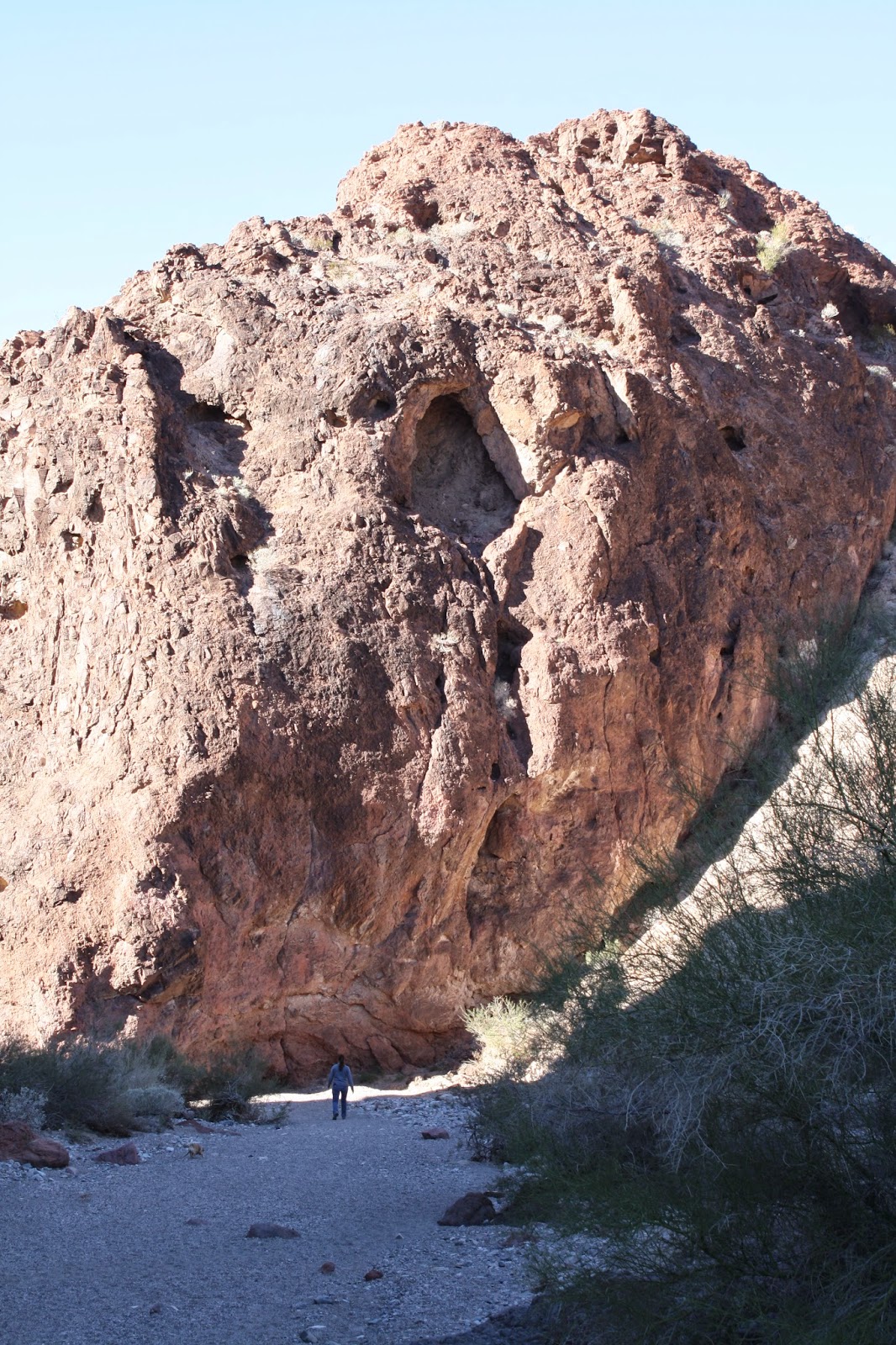 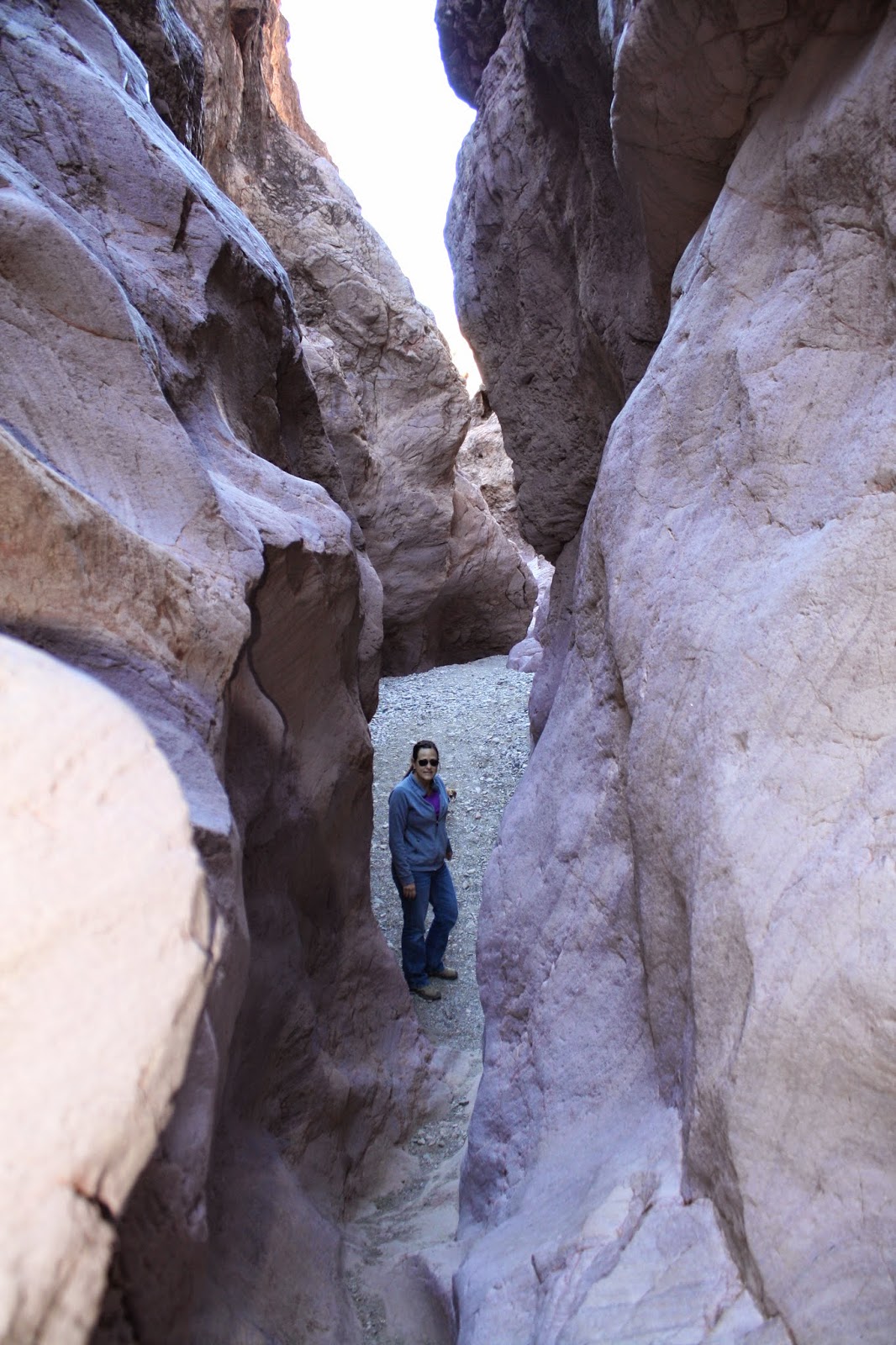 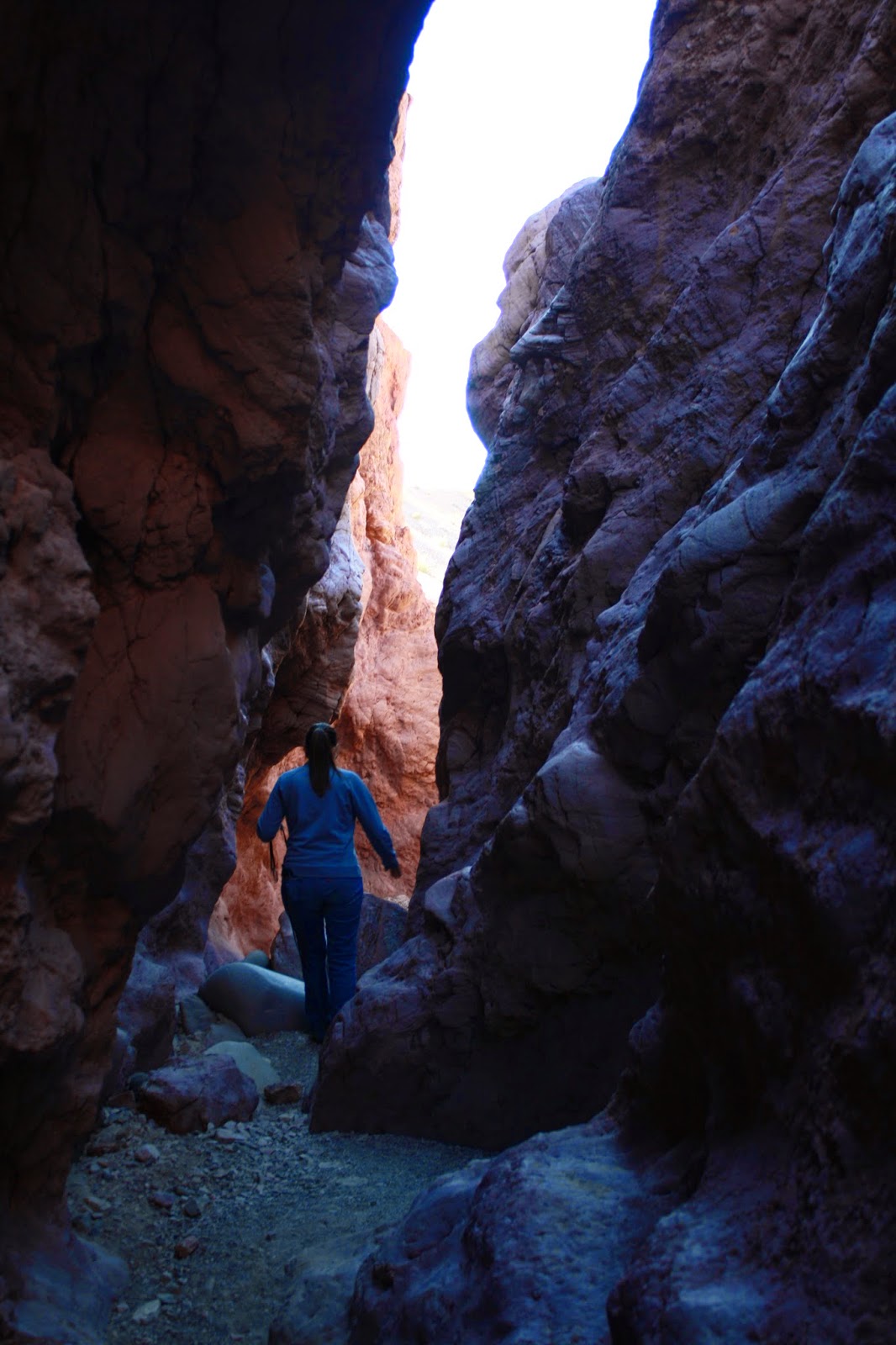 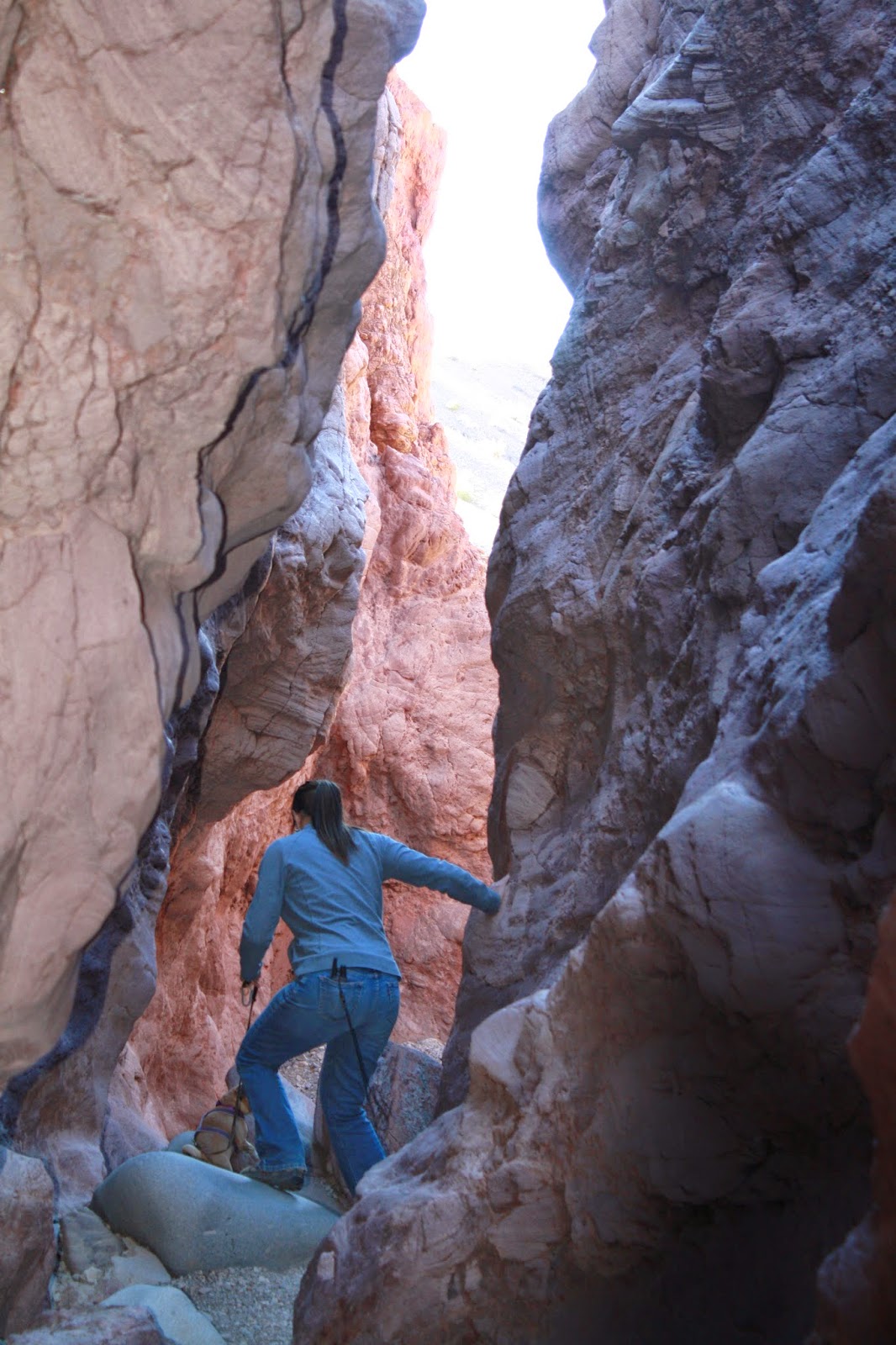 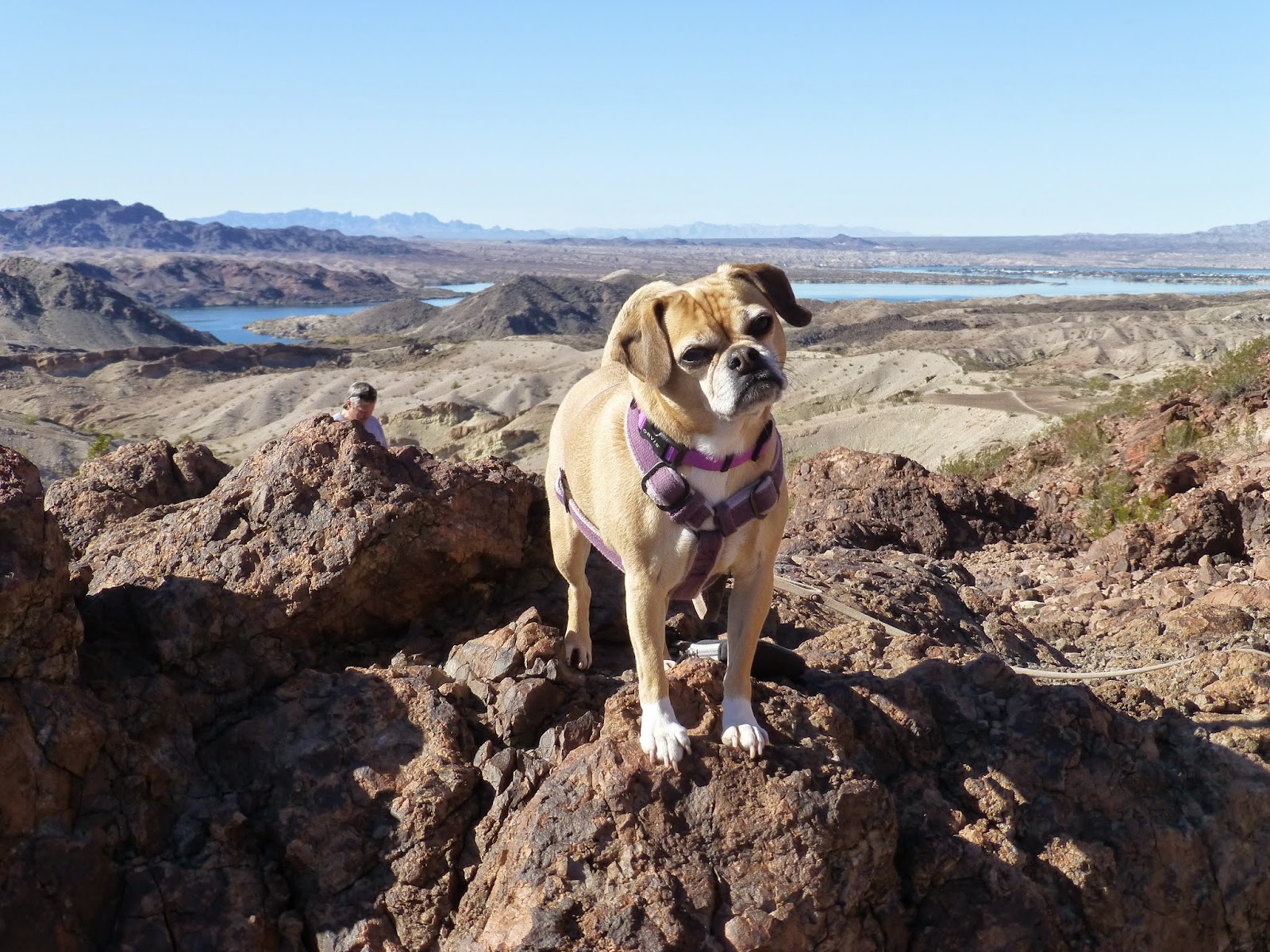 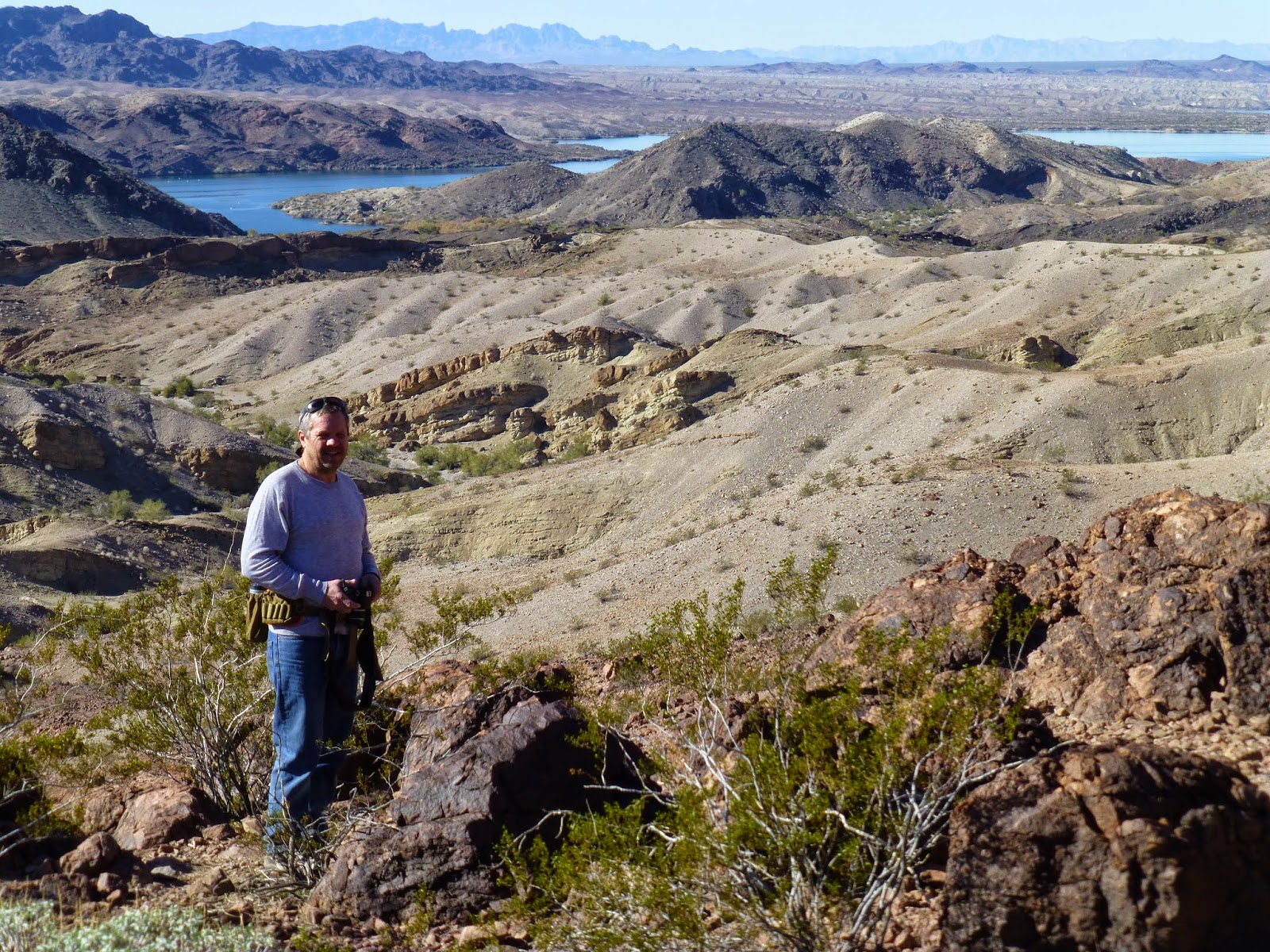 Speaking of the next few days, tomorrow we hit the road again for a couple days at Quartzsite. Thanks for stopping by!

Posted by Jim and Barb's RV Adventure at 6:30 PM