Fun with Friends in Homer!

Of all the places we are been so far in Alaska we think the Homer area is our favorite. And that is saying a lot considering everywhere we have been and what we have done. We loved Skagway for its beauty but a bit too touristy. Valdez was an awesome little harbor town and Haines offered great fishing along with a laid back atmosphere. But the combination of beauty, experiences and people we have meet have thus far puts Homer at the top of our list. 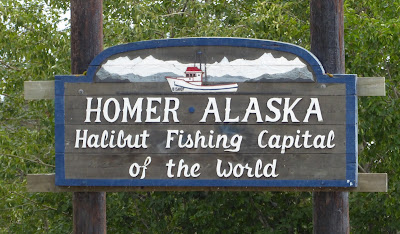 The town itself is big enough to where you can get almost anything you need without charging crazy high prices and if they don’t have it, nearby Soldotna or Kenai will most likely have it. Although the town does get the occasional cruise ship, it is not over the top touristy. The fishing in the area is incredible offering both salt water and fresh water action in the Kasilof, Ninilchik, and Kenai Rivers as the salmon make their spawning migrations. But it is the people that really set it apart for us.


In a previous post I had written about meeting Rich and Susan while walking the docks in Homer. After returning from Kodiak we moochdocked in their driveway in Ninilchik for several days basing our adventures from there. We also met one of their daughters, Angela, who had flown up for a visit. Angela is as fun and witty as her parents and is an incredible baker who made a delicious rhubarb dessert.  In addition, we met Dan and Denise another couple who had flown up from Minnesota and stayed with Rich and Susan for a couple weeks.

During the week we explored the Homer Spit a bit more and of course had to test the brews at Grace Ridge Brewing. 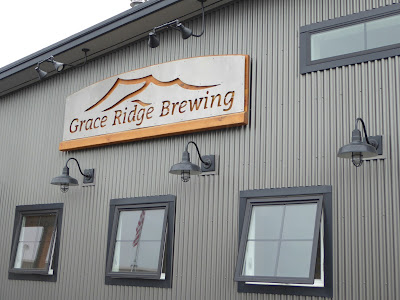 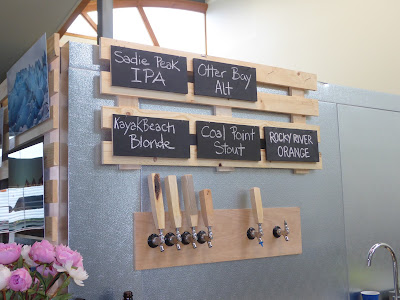 Angela had talked to some guys at the airport who had said the Red Salmon were running in the Kenai and sure enough a quick look at the fishery numbers revealed that between 20,000 and 30,000 salmon were entering the river each day. The next day Barb and I headed off to the Kenai to see if we could get a couple on the stringer. Rich provided us with a map to his favorite spot along with a handful of flies that he likes to use and we were off! As we arrived there were fisherman leaving the river with fish in tow, it looks like we were in luck!


It was not too crowded with maybe 10-15 feet between fishermen. The cool thing about that is that when you hook a fish usually the fisherman downstream from you grabs their net and nets your fish for you! Sometimes you have to dodge out of the way of a hooked fish heading straight downriver from the guy who has it hooked. There are other hazards too. You generally is 1/2-3/4 ounce lead weights and if you get snagged or hook a fish that weight can come zinging back at you like a little lead missile! I did manage to hook myself in the back of the head when the lead zipped past me and boomeranged back imbedding the hook into my head. Luckily it was not too deep and with a little yank it came right back out. This river was much wider and faster than any that we had fished before making it a little more challenging to stand in the river. As we waded to our fishing spot we passed a guy who said he falls in once or twice a year. About that time Barb starts weebling to the right to the left, back to the right and in slow motion she landed on her backside in about 3 feet of water! She managed to get back on her feet, looked at the guy and said "I just wanted to get it over with". Although wet, she was a trooper and kept on a fish'in. After adding a little more weight to our rigs to get our flies to the bottom we were ready for some flipping. Over the course of the next 4 hours we caught 6 fish, landed 3 of them only one of which was hooked legally but we had enough for dinner that night! 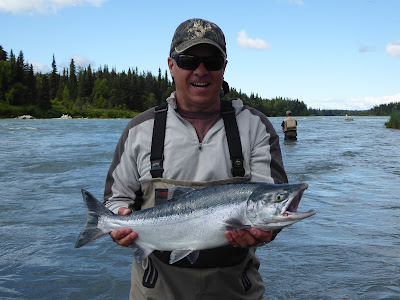 As we left the parking area we noticed a woman with a dog lying next to her in the road. As we approached it was evident that the dog was having a seizure so we stopped to see if there was anything we could do. The woman asked me to drive back to her house to get her husband. Barb stayed with the woman while I went to their house. When we returned about 10 minutes later the dog (Brandy) was standing and panting like nothing ever happened wondering what all the fuss was about. As we were standing on the road talking the couple introduced themselves as Rod and Denise who owned The Lazy Salmon  just up the road right on the river. We told them we were in the area doing a little fishing and they invited us back to their house to fish from their dock. How could we refuse?!?!


Rod and Denise have a beautiful place right on the river with their main house and several cute cabins. Rod got us set up for fishing and we tried our luck for about an hour before we had to head back for dinner. As we were packing up Denise gave us thier phone numbers and said we were welcome back anytime to fish or stay with them. We were in awe of their hospitality and thought maybe they were related to Rich and Susan! Or are all people up here that friendly?!? 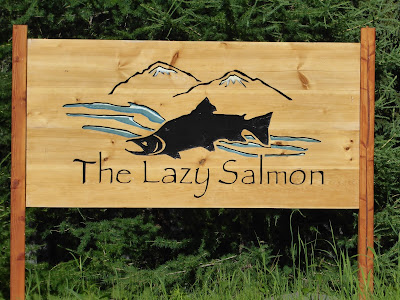 Just when you think it could not get any better we returned for a salmon/halibut dinner when Rich suggested that we go out the following day in his boat for another halibut/whale watching adventure! The fishing was a little slower than the previous week but Barb did manage to boat a few small halibut. 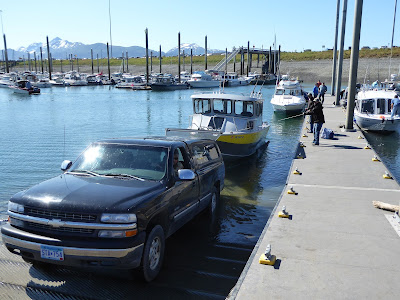 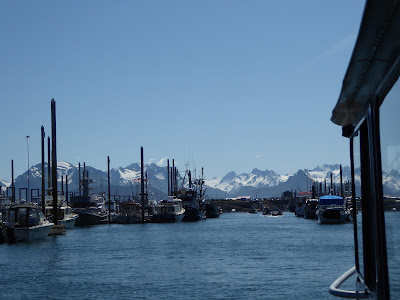 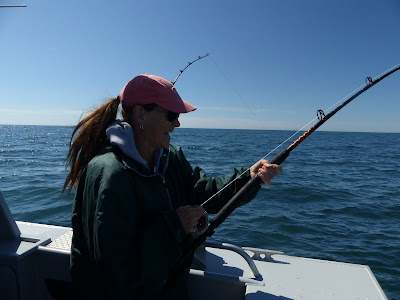 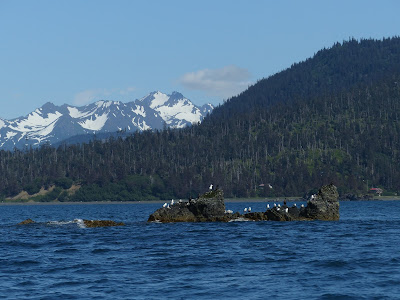 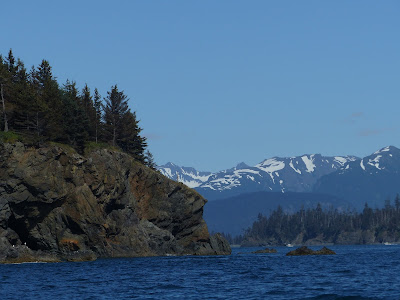 The whale watching on the other hand was spectacular! We saw both humpbacks and orcas. 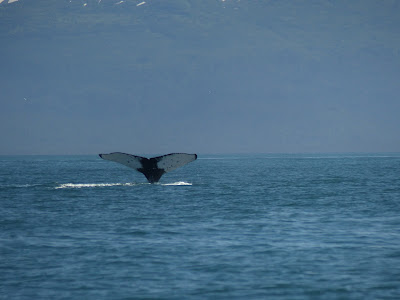 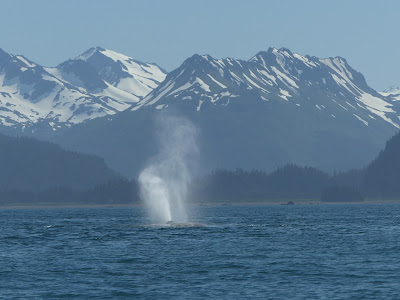 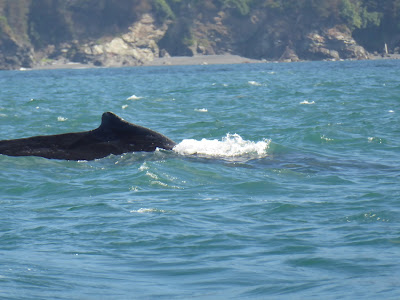 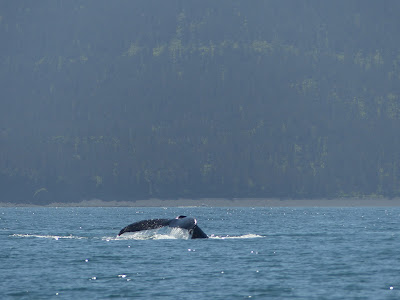 When we returned we sat on the deck enjoying a delicious rib dinner that Dan and Denise had prepared and watched the eagles fly over until the sunset over the mountain (@11:00pm). 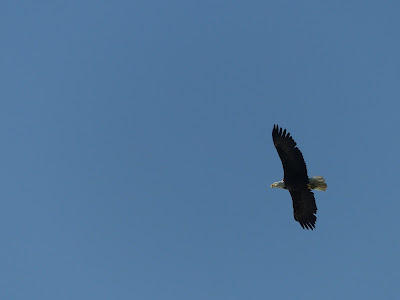 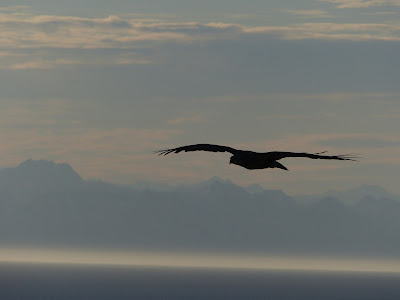 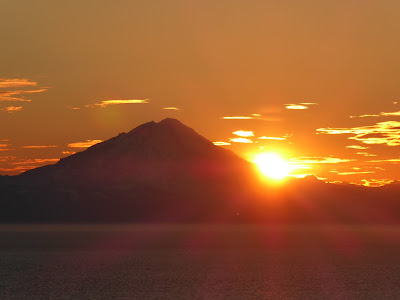 The next morning it was time to say our goodbyes and hit the road vowing to be back in 7 days and headed into town to do laundry and hit the farmer’s market. The farmer’s market was interesting with live local music and a lot of booths offering vegetables, baked good and local crafts. Interesting but we did not buy anything. 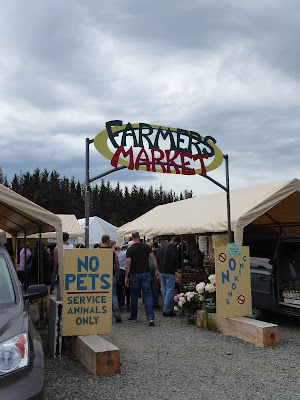 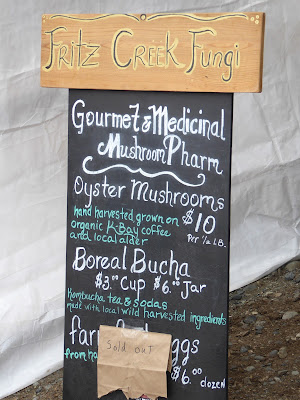 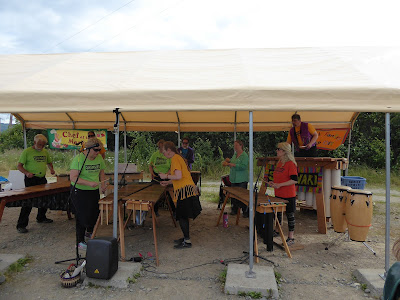 We also managed to meet up with fellow fulltimers and bloggers Les and Sue while in Homer. We had originally met them in Quartzsite last winter and had been keeping in touch throughout our Alaska journeys. Homer was the one spot that it looked like our paths were going to cross so we made arrangements to meet them at none other than the famous Salty Dawg Saloon on The Spit. We had a great time catching up over a couple of beers and swapping stories. Ends up we might see them again next week as well when we are in Whittier! 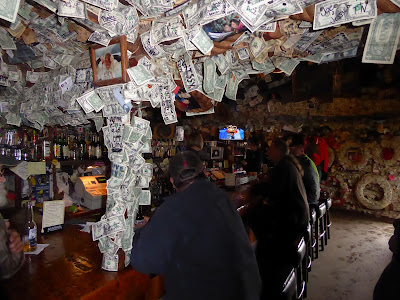 On our last day in the area we headed back to the Lazy Salmon to see if we could hook a few more reds. Rod was out dip netting but Denise was home and said we were welcome to fish in front of their place. We fished most of the day and managed to catch a few more and spend a little time visiting with Denise and Brandy who I am happy to report is doing well!
On another note, we did receive some sad new. Barb’s grandmother passed away recently. I don’t think we will ever meet a woman as amazing as Adeline. Born in 1921, she lead an amazing life for 95 1/2 years working and volunteering right to the end. With 8 grandchildren, 20 great grandchildren and at last count 9 great-great grandchildren. She will be truly missed.