Headed for the Lower 48

Sweet corn, ribeye steaks, a good pizza, any restaurant hamburger that is less than $16. Direct TV, our comfy love seat and our spacious (relatively speaking) shower…..These are just a few of the things we have been missing in the past few months since embarking on this Alaskan adventure.
As we make our way through British Columbia and Alberta we are have been thinking about some of the things we are looking forward to when we get back in the lower 48. We arrived in Alberta’s Jasper National Park and were quickly reminded why we avoid National Parks during peak tourist season. There are people everywhere! Bikers, backpackers, hitchhikers, RV’s of all sizes and people of all nationalities. If it was not for the beauty of the Jasper and Banff National Parks we would have turned around and found another route south. But instead we took a deep breath and plunged in with the masses.


We had preplanned much of our activities for this area, most of which involved hiking. Our first hike was Valley of the Five Lakes. It was described as a moderate 2 hour hike around 5 lakes of varying colors. I don’t know if it was the 80 degree weather or the fact that we have not been doing a lot of hiking but we were whooped by the time we returned to the truck. The hike was pretty cool, the views incredible and the varied colored lakes looked cool and inviting. There were quite a few other people on the trail, rarely a minute went by that you did not see the group in front of you and a group heading towards you. 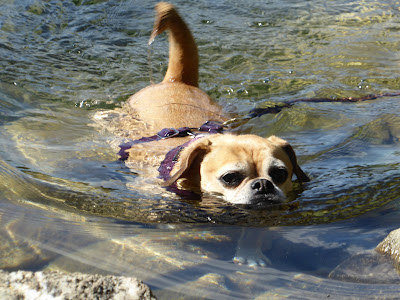 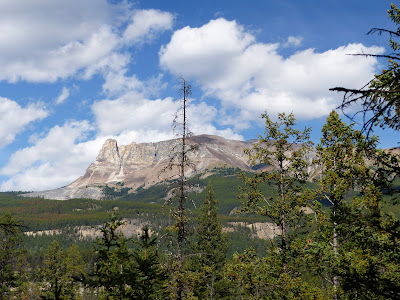 It was about 5:30pm when we finished our hike and jumped in the truck to find a campsite. Big mistake. Campground after campground displayed a “Full/Complet” sign. We finally found a spot in the parking lot of the Icefield Centre which had an overnight RV section for $15.80/night. Not the wooded site we had in mind but it still had incredible views out the backdoor! 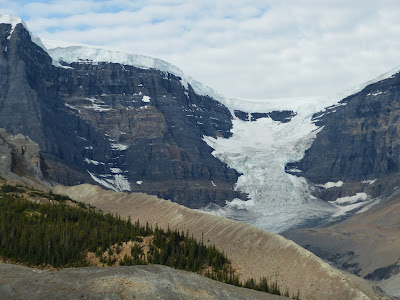 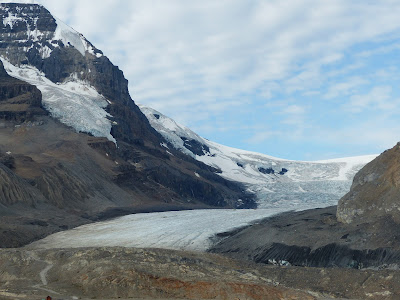 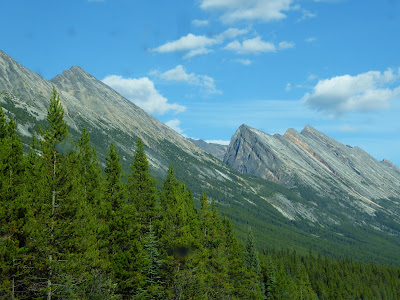 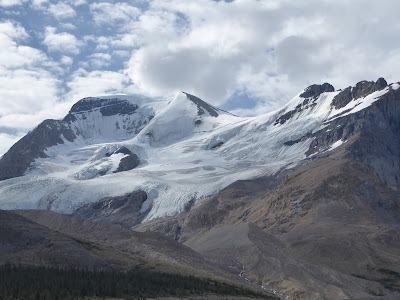 Our next hike was a much shorter to Mistaya Canyon. This is an area where Mistaya River dumps into a very narrow channel much like the slot canyons we hiked in Arizona and Utah. Watching the water rush through these narrow slots you can see how dangerous it can become in a hurry when rain hits those dry canyons in southern Utah. No wonder people drown every year during flash floods, there is no way to hide and the water is so incredibly powerful. 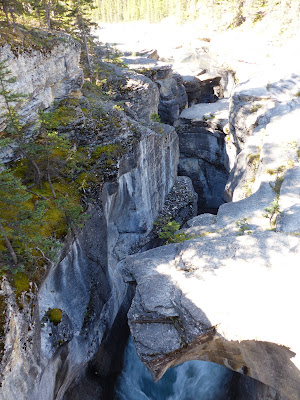 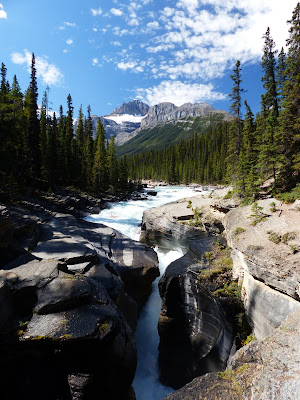 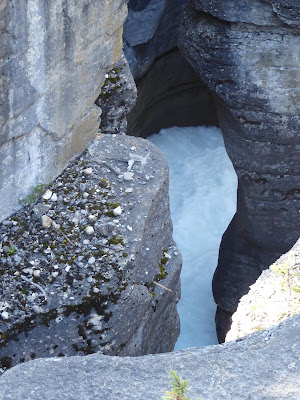 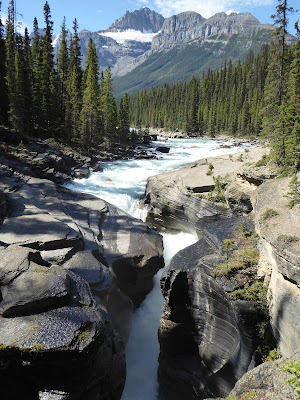 We smartened up and found a campsite about 2:00 that afternoon at Waterfowl Lake ($21.50 + $8.80 for a fire permit) where we built a fire and spent the afternoon reading and relaxing our sore muscles. We also met a couple from Saskatchewan who had been vacationing in this area for over 30 years. They gave us the scoop on sights to see and the best route to take south. Based on their information we changed our route away from Calgary and onto more remote roads that will get us to Glacier. 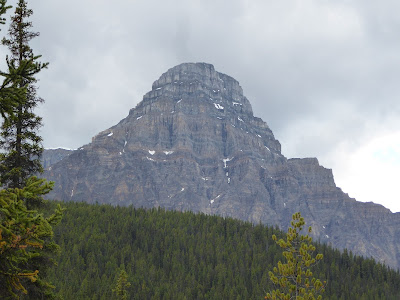 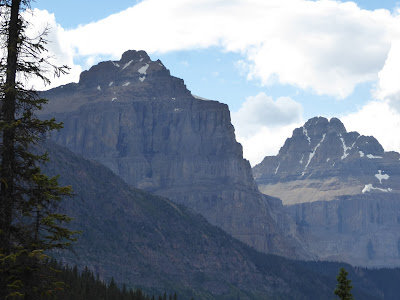 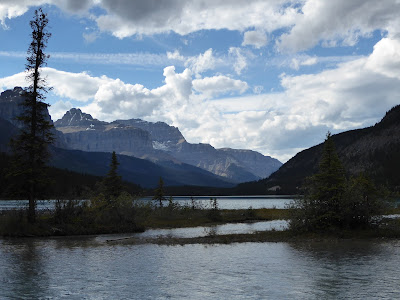 Speaking of changing our route, I had eluded to speeding up to make up a few days on our last blog as we were adding another stop on our way back to Utah. We are going to stop and spend a few days with our friends Dino and Lisa who are workcamping in Yellowstone! We realize it is another busy park during what will still be their busy season but Dino and Lisa are worth it.


After leaving Waterfowl Lake we hiked the Peyton Lake Viewpoint. It is a rather short 10 minute hike up a steep grade again with LOTS of people. This hike actually made us feel a little better as we were passing most of the other hikers going up the trail. Maybe we are not as out of shape as we felt the other day. Although the picture below looks peaceful and tranquil in its beauty, don’t let that fool you. I had to stand in line for 10 minutes to get this picture and had 15 people waiting for me to take my spot.
Our plan for the day was to drive to Lake Louise, walk the town, post a blog then carry on to Radium Hot Springs and spend the night at a campground. After fighting for a parking spot, getting the blog posted and fueling up spending all but the last $10 of our Canadian cash, we got out of town and headed to Radium. One thing that we found fascinating was that they actually built crosswalks for the animals to cross the freeway. Complete with trees and grass so they would feel comfortable using it!

I would highly recommend the drive on Highway 93 whether you are heading into or out of Banff. 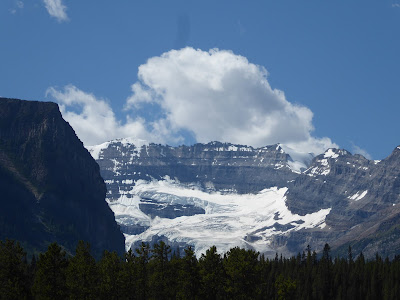 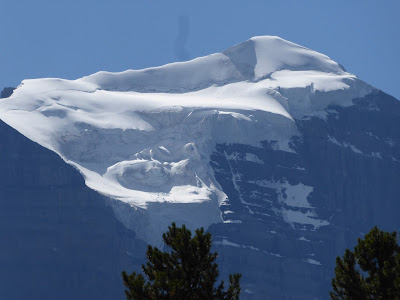 The town of Radium itself is very cute, but again crowded. It was also incredibly hot at 87 degrees (hiking is out of the question) and would you believe the hotsprings were packed? Who would want to sit in a hotspring in almost 90 degree weather with a bunch of sweaty strangers? Instead of partaking in that joyous activity we got an ice cream (there goes the rest of our Canadian cash), walked some of the shops and continued south on 93. This section was equally as beautiful as the last but it transitioned from totally mountainous to mountains with rivered valleys and croplands. Our goal for the day had transitioned to getting a campsite near Radium to driving until we could find a remote campsite to spend the night. Barb searched her AllStays app for just such a spot and noted quite a few free remote campsites south of town on the route we were going to be heading anyway. The first spot was about 30 miles south of town and about a mile down gravel two track road where there were supposed to be 6 sites on a quiet little lake. The sites were there all right, along with 6 campers and about 20 people. No worries, there is another spot on the other side of the lake that has 10 sites. You guessed it, it was packed as well. So we jumped back on 93 south and Barb found another promising spot about 40 miles down the road in the direction we were going anyway.


This next spot was listed as having three sites, picnic tables, fire pits and an outhouse. We turned off of 93 onto a gravel road ¼ mile up turned on to another gravel road, went by a couple of farms and turned again on a two track leading through the wood. After a few hundred yards it opened up to a small little lake with the sites, picnic tables and fire pits as promised and the best part there was no one around! No a single soul! There was however a few Hereford cattle wandering the campsites! We laughed and found a site to our liking and set up for the night. We felt right at home with the cattle as it reminded us of the cattle we raised back in Wisconsin. Although a different breed, they were still curious and cute as they wandered around the campground grazing on the grass. It was great to be alone (except for the mooing)!!!!! 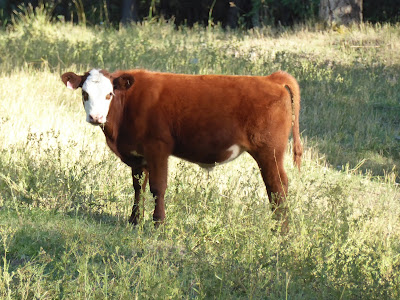 Vowing to return, we said goodbye to Canada, we will return to Banff sometime in the future, during the off-season when the temperatures are cooler, the kids are in school and there are less people.  How does that saying go? For everything lost there is something gained? In that case…. There ought to be a sweet corn stand somewhere in Montana!
Posted by Jim and Barb's RV Adventure at 5:51 PM