I absolutely love this time of year. The spring sun is warming up the earth and turning brown to green, the birds are their most colorful, doing their best to impress a mate and the farmers are busy in the fields. Leaving Wisconsin we traveled…..well in separate directions. Yup, she left me again! Daisy, Dakota and I had a 9 hour driving day to the northwest while Barb flew several hours east. When the day ended I found myself in Douglas, North Dakota on the Finken/Sobieck farm and Barb found herself at our daughter’s house in Greencastle, Pennsylvania.
Although we have spent several falls at “the farm” over the past several years, this is the first time we have spent any time here during the spring and I was curious what it was like during planting season. By the time I arrived they had their peas and canola planted but they had plenty of soy beans and durum to get in the ground. 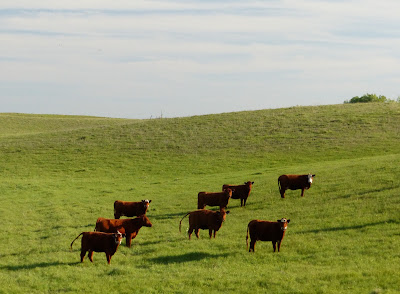 Having never planted before I was unfamiliar with the steps that needed to be taken to get the seed in the ground. Over the course of the next several days I pitched in and helped them anywhere a rookie like me could do so without getting in the way. Being a "no till" farm there is minimal preparation of the land. They often plants right through the residue from the previous years crop.

Depending on the field they will often spend time picking rocks, digging up boulders and repairiong drainage areas. I spent hours out in the field operating the rock picker slowly but surely removing some of the thousands of rocks that surfaced. The rock picking is kind of interesting. The use a cleverly named implement called the Rock-o-matic. This implement has turning spikes similar to a paddle wheel on a boat that scoops rocks softball sized and larger into a bin. Once the bin is full you use the hydraulics to dump the rocks somewhere off the field.

Once the field is prepped it is ready for planting. One of the first steps is to load the seed into the semi. I operated the forklift as 50 bushel totes of seed were emptied onto the grain belt and into one of the hoppers on the semi.

From there they load one of the three hoppers on the cart with the seed. (the other two hoppers are filled inoculant that promote plant health and the third hopper is filled with fertilizer).

Then it is planting time! The planter they use is an air disk planter meaning it uses disk to create the furrow in the ground a blower to feed the seeds and the appropriate ratio of inoculant and fertilizer from the hoppers to each of the 65 furrows spaced 7 ½ inches apart followed by a packer to set the seed into the soil. 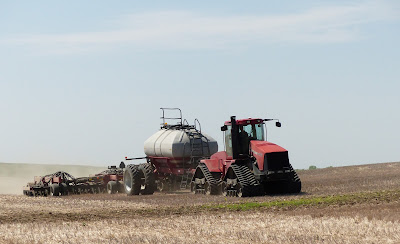 Next up is the roller, a 45 foot three sectioned roller that packs and covers the seed. 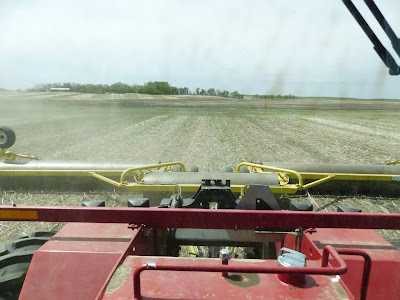 Last but not least is the sprayer to prevent any plants other than the beans from growing. This thing is 120' wide so you have to be really careful not to hit trees, fences or any other obstacles.

Each of these steps are critical in order to maximize the yield in each field with the planting and spraying being the most critical. So what did I do? Over the course of the past week I did each of these steps except the actual planting. Screw that up and..... well lets just say they did not want that screwed up. I spent most of my time rolling and picking rocks.

Speaking of screwing up, I also play another key role at the farm. I am the designated “blamee” for anything that goes wrong while I am here be it a breakdown, something lost or just a screw up if I am anywhere near the area, and by near I mean within 10 miles, I am immediately blamed. A key role which I have become very good at!
Over the past week I rolled somewhere between 900 - 1,000 acres of beans and only had one “screw up” when I lost a bolt on one of the wings. I am not sure how that was my fault but I was told it was so it must be……


The other bonus about being here this time of the year are the birds. Songbirds, shorebirds and waterfowl are very abundant right now making for plenty of photo opportunities! In between tractoring I was able to get out several times and take some pretty cool shots of the local bird life. 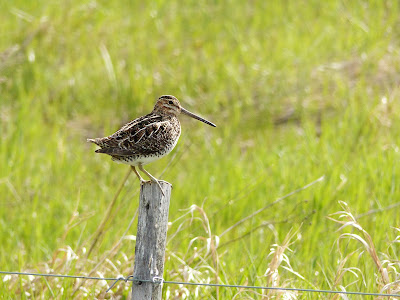 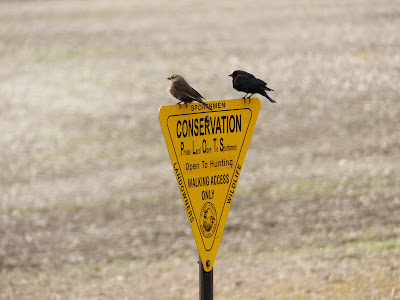 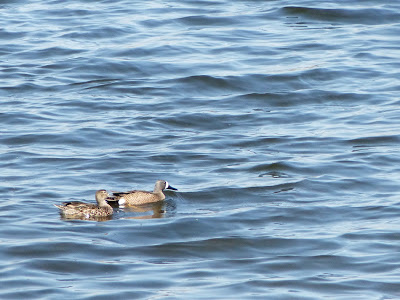 Barb's visit was focused around baseball and food. Does it get any better than that? In addition to visiting and spending time with the grandkids they managed to get out to an Orioles game and Shane used his ultimate smoker to cook up some ribs and chicken!

She flies back to Minneapolis today then just a short 8 hours drive to Douglas and we will be together again!

Posted by Jim and Barb's RV Adventure at 5:14 AM