Wildlife on the J-B

Although we are continuing to work on our and Kevin's barndominiums, I wanted to take a moment to share some of the wildlife pictures we have taken on our property.
Deer are our most common visitors. We have both whitetail and mule deer in the area. The mule deer are very accommodating when it comes to getting their pictures taken while the whitetails are a bit more camera shy. They tend to stop by first thing in the morning and right before sunset when the days are at their coolest.
Typically the does show up alone but one day one doe showed up with twin fawns. Now they, along with another single fawn are almost daily visitors. 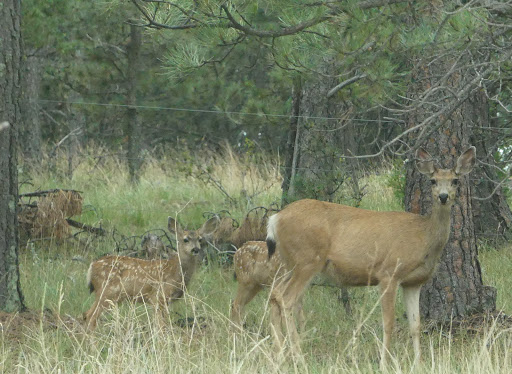 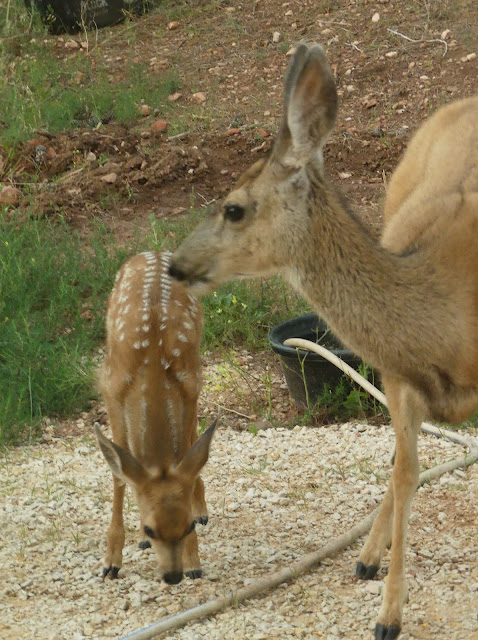 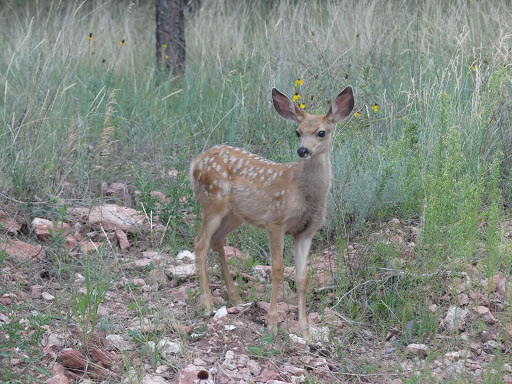 Dakota just ignores the deer, while Daisy takes offense to their intrusion and will stand at the screen and "bark" at them. The deer just stare at her and wonder what her problem is. 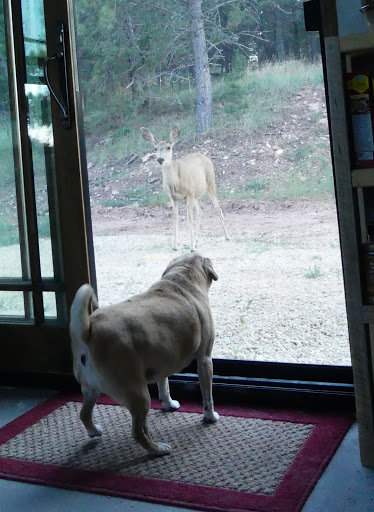 While most of the bucks hang around by themselves, we have one that comes in with the does and likes to play "king of the hill" like a king watching over his kingdom. 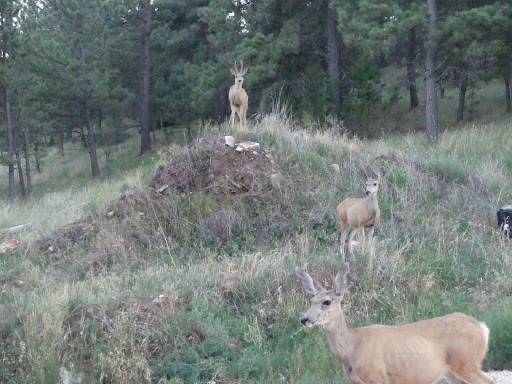 We also have a tub of water out there for them but this doe loves to drink out of the birdbath. 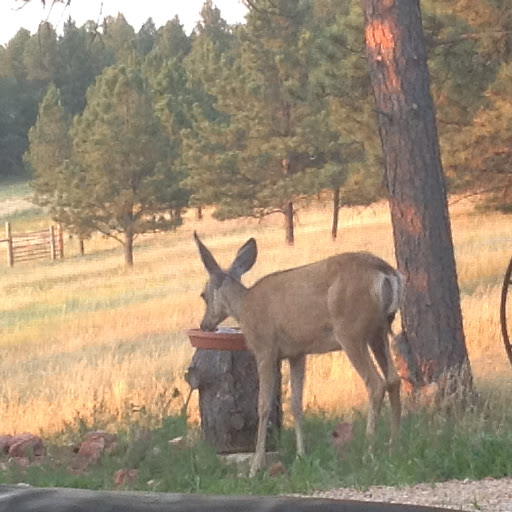 Speaking of birds, almost 40 turkeys will show up once in a while to clean up any corn remnants that the deer leave behind. 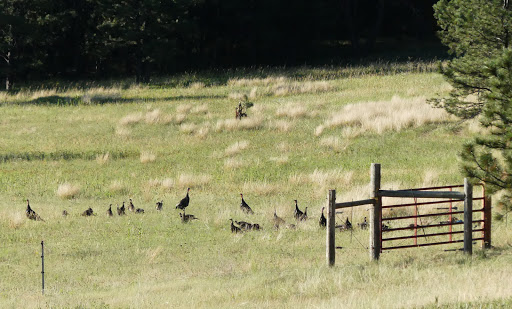 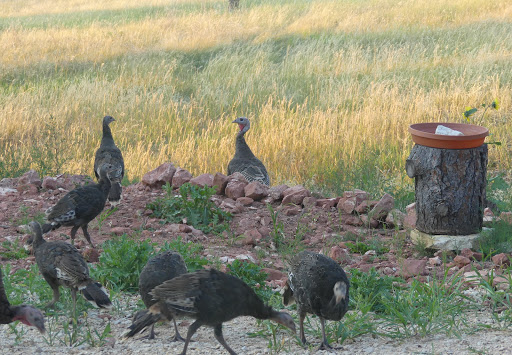 Not to be forgotten, we have a couple of bunnies that come around as well.... 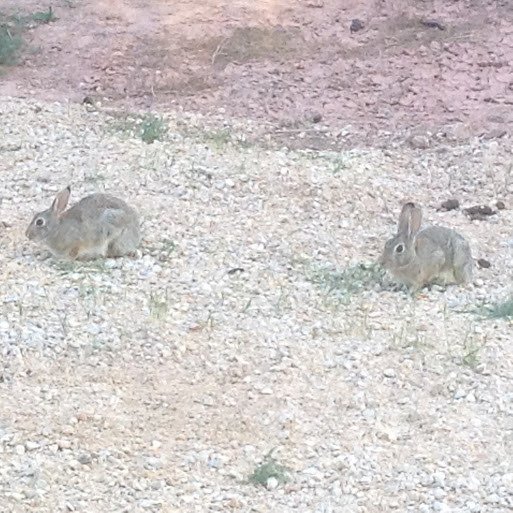 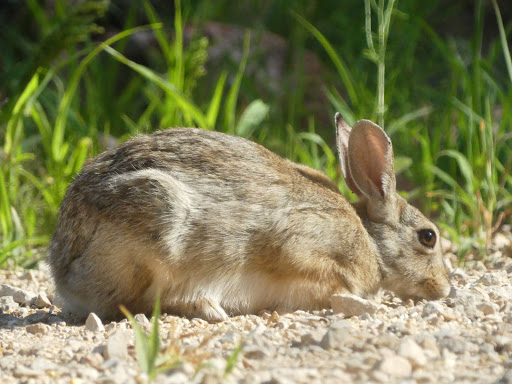 On the house front, I have been spending most of my days over at Kevin and Cheryl's. We are making some great progress.
Over the past couple of weeks we have installed fascia, shingles, a working toilet (woohoo!), the boiler system for the domestic water and in-floor heat,  the carport and varnishing the boards for the inside have been the major projects.
The two biggest projects were forming and concreting the patio area and building the carport. It started out something like this.
Before building the carport we had to form up the patio and get concrete poured as we could no longer reach that area once the carport is up.
Barb came over and helped with the actual pour. We poured 5 yards of concrete in a little over an hour and then spent another hour finishing the edges putting the final touches on it. 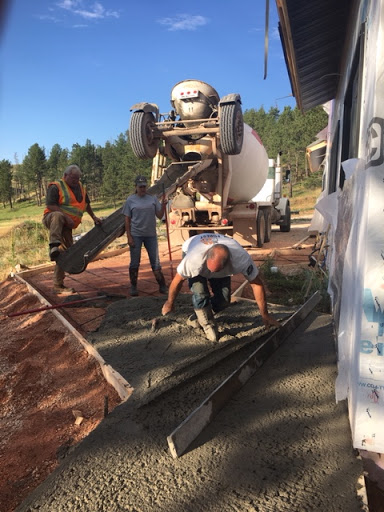 On the carport, the first thing we had to do was to cutback the roofline where the carport was going. Unfortunately, several hours into the project it started pouring rain. An inch an hour for the next three hours.....What a mess! We had buckets in the kitchen and entryway but we could not contain everything and that area of the house got soaked!
Once the rain stopped we got the house sealed up again and over the next few days we worked on building the trusses out of 8"x8" timbers, installing the cross beams and getting the trusses up. 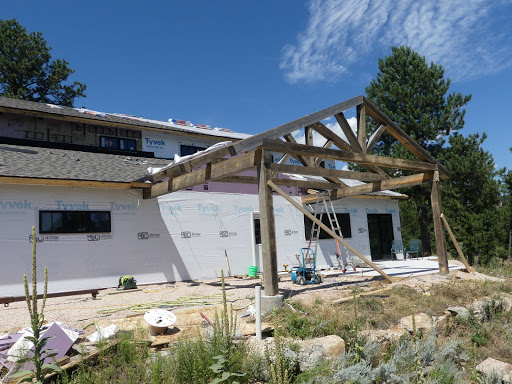 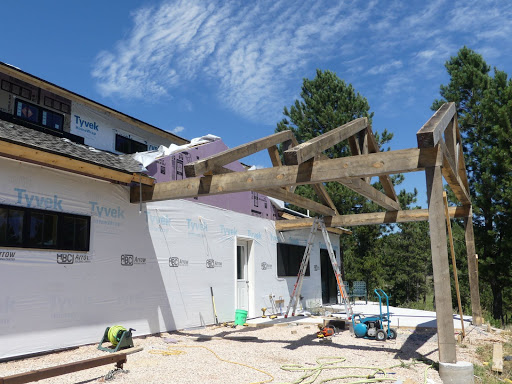 Just need to get the roofing on and shingled and we can cross that project off the list!
While I am over at Kevin's, Barb is still busy working on our house. She has gotten a couple of walls done. Hopefully by this time next week we will have all the major walls complete!
We have also decided to extend the loft by 1' so it covers the top of the kitchen cabinets (why didn't we think of this earlier!?!?) This meant I had to cut through the kitchen/bathroom wall to install rim boards that would support this flooring. We are also going to run our cooktop vent pipe though this and vent it outside. This project will take a little more dedicated time but in the end I think it is the right move.
Our neighbors Jim and Brenda are selling their land and their rig and are moving onto bigger and better things. Come to think of it our neighbors on both sides are selling their property.....humm... If you know anyone looking for 40 acres of heaven here in South Dakota or a Grand Design Momentum with a complete solar package, we know just the right people!
That pretty much sums up the last couple of weeks here in South Dakota. Things are moving along great in some areas, a little slower in others but it progress and any progress is a plus!
Posted by Jim and Barb's RV Adventure at 7:16 PM