Being a Trophy Husband is Exhausting

It’s a burden I have had to live with for some 34 odd years. Well, not all of them have been odd years but the most of them sure have!

But this week I learned a new role which is equally as exhausting. It requires a skill set that I did not even know that I had but apparently I came about it quite naturally. What is this new role? In addition to being a Trophy Husband, I am a Trophy Friend constantly making Kevin look good while we are working together. Who knew there was such a thing! Whenever we are working together he goes about it like he knows exactly what he is doing while I on the other hand look like the total opposite of that.

This week was all about concrete. Barb and I have been waiting a long time for this week. The week where we pour 151’x8’ of our porch on 3 sides of the house over 3 days. 88’ along the east side, 46’ along the south side and 17’ on the west side. This entire area will someday be covered by a covered porch but for now we will be happy just to have a solid surface to walk on. The first day was spent prepping/leveling the ground, drilling holes for the porch posts and setting form boards.

Most of the post holes went well, drilling down 48” or more. But with the rocky terrain there were a few holes that only went down 24” or so. The east side has 9 holes. The south side 5 holes and the west side only 4 holes.

This would be the 4th pour with team Jim, Barb and Kevin having already poured at Kevin’s and twice at our place. The first pour was 77’ along the east side. Our 79 year old neighbor Owen volunteered to come over and help and I tell you what, he kept up with us shovel for shovel throughout the entire pour!

The weather and the pour was great, in the mid 50’s. The truck backed right down the side of the house and pulled forward as we poured. Barb handled the chute, shoveled and edged. Owen stood on the outside and shoveled along the edged as we went. I stood by, took pictures and generally made everyone look like they were working harder than me.

Later in the day Barb had the camera and was constantly taking pictures whenever she saw me doing nothing and just watching Kevin. Hey, that’s what Trophy Friends do, they make their buddy’s look good!

The next day we spent forming up the next pour which was to take place two days later on Friday.

Thursday Kevin and I took a road trip to the Yankton area to get a load of hay from a friend of his. Although that side of the state does produce some fine hay, it just was not worth the 16 hour trip. We left at 5:30am and finally got back to Kevin’s at 9:30pm. The trip itself went fine but it is one we will never do again! About 2 hours into our trip Kevin got a call from Cheryl saying that her horse had opened the gate and was gone! Kevin’s horse Willy was still in the pasture but Blondie was nowhere to be seen!

We were too far in our trip to turn around so I called Barb to see if she could go over and help. The gate that Blondie opened was the one that led to miles and miles of National Forest property. Both Barb and Cheryl spent the next 4 hours driving and walking around looking for Blondie. Barb walked and walked the hills behind this house. She and Cheryl were in contact via handheld radios as cell phones are hit and miss in that area. 3½ hours later Cheryl was driving the road she had been driving all morning when she came around the corner and there was Blondie standing along a fence. She was able to walk right up to her but she was over 3 miles from home in rough terrain. The radios were not working this far away so Cheryl flagged down a passerby who drove to Cheryl’s house catching Barb just as she was coming back to the house. Barb hooked the horse trailer to the Jeep (which was way too heavy a load for the Jeep) and headed over to where Cheryl was standing with her horse. They then loaded it up and returned Blondie to the pasture. It was a few tense hours but it all turned out well. Bonus, Barb even found a really nice elk shed on her walkabout!

Friday was pour day again. This time it was just Barb, Kevin and I. This pour did not go quite as well. First it was tough to get the truck into position on the south side of the house. The truck was on an angle straddling the form boards and we poured as we went across the front of the house. All was going well until the truck slid sideways taking out the form boards! Ugh! We kept pouring with the intent to pour up to where the form boards were taken out. Then when I was manning the chute I too was standing on an angle outside the form when all of a sudden there must have been more concrete in the chute then my weight like maybe like160# or so, okay maybe a little more than that. Anyway, the chute full of concrete just shot me down the hill on my butt so instead of the concrete dumping in the forms it was dumping on the ground all around me. The truck operator turned off the flow but not before we had a nice arc of concrete outside the form! Funny how you never think of taking pictures when everything is going wrong.

So as we got to the area that the forms were crushed, the truck moved out of the way and Kevin continued to level out the concrete. Barb was on the shovel and I was frantically ripping the crushed form boards off the bent stakes, measuring, putting in new stakes, leveling and putting new form boards ahead of him. We barely missed a beat and soon we were carrying on with the rest of the pour! They all can’t go perfect right?!?! Once all the concrete is poured Barb and I do the edging while Kevin floats and works on the main sections. Once the edging is done there is not much left for Barb and I to do so I just stand around, watch Kevin work and make him look good!

That night it got down to 49 with rain which is not a problem, we just covered it so the concrete with poly which helps retain the heat and continues to cure. We had added accelerator to the concrete mix at the plant to get it to set up quicker as we knew the weather was changing. The next day the rain turned to snow as the temperature plummeted into the 20’s and teens. 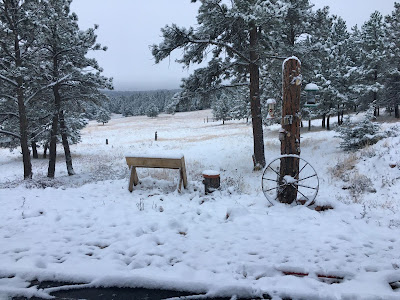 We are keeping the concrete covered for now, I am sure it is all set but it does not hurt to keep it covered for a few more days.

This week we also put our camper to bed for the time being by winterizing it and getting it ready for the colder weather. I love the Lance campers and how easy it is to winterize them. 20 short minutes and I am done!
Our big purchase of the week was the delivery of our antler chandelier. We had been looking for just the right one when we saw this one on Black Forest Décor. We have it hung and are just waiting to get to town to buy some bulbs for it!No big projects planned for this week. Maybe work on the loft floor, varnish some windows and generally work at making Barb look good....which is exhausting enough!
Posted by Jim and Barb's RV Adventure at 7:29 PM