Some people laugh and think it is silly that I call Barb Barbie but I have been doing it for over 30 years and to me it is just natural, you know kinda like how she always calls me dumb@ss, it is just what rolls off the tongue when we address each other. Me calling her that has nothing to do with the doll, everyone knows she is a princess!

If you are looking for a lot of pictures, you will be sorely disappointed. There is a grand total of 2 pictures in this entire post. Proof that what matters is quality, not quantity.

It is deer season here in South Dakota, archery season actually opens September 1st through the end of the year. With an archery tag you can harvest any deer; whitetail or mule deer, buck or doe. I have trail cameras throughout the property looking for the big one and get out hunting as often as possible. I would venture to guess that I have over 500 hours in the woods looking for "the one".  Conversely I have been buying Barb an archery tag for the past few years. Some years she goes out, some years she just does not feel like it. Over the past three years she has less than 50 hours in the woods combined. This year she decided she wanted to go out. So I got out her bow, dust it off, found a few arrows and we went outside to practice. After a dozen or so shots at 20 yards we were confident that she would do well given the opportunity. In fact she ruined one of her arrows but hitting it with another arrow.

She did not go out for two days but then on the third morning she decided to go out. She came back 40 minutes later saying she shot one! I was happy for her but also thought "Oh great, she is going to one-up me again!". We waited about 20 minutes and went out to look the deer. We tracked the deer, not a lot of blood but enough to pick our way through the woods. About 100 yards later Barb looks up and screams like a 6 year old getting her favorite present on Christmas morning. It was a moment I will never forget as long as I live. There laying in the pine needles is a big mule deer buck! She just put her hands to her mouth stared at the buck and kept repeating, "I got him, I got him!".

Now, I realize that hunting is not for everyone and I totally get that. But for us, it is how we were raised and a part of our culture. In fact when we lived in Wisconsin our kids school closed the week of the gun deer season because no one showed up anyway. I could not be happier or prouder for Barb, her biggest fear when using a bow is making a bad shot and this one was absolutely perfect, I am guessing the deer was dead within 5 seconds of her shot. And yes, although I have shot several mule deer in my life, I have never shot one with my bow and I have never gotten one this big so I was "one-upped" once again! 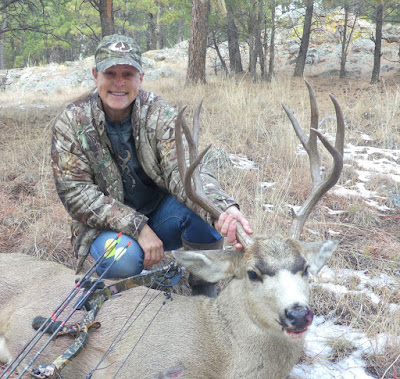 The rest of the week was spent moping around working on projects inside and outs. The weather was great for mid-November with highs up into the 40's and even 50's. One last chance to get some projects done outside.  These included installing the oven cooktop vent outside the house, working on fencing, installing some outside lighting and wiring for a hot tub. Yes, a hot tub!

We have been wanting one for years. We had one in Wisconsin and used it almost daily, summer and winter. So when we got the concrete done around the house we were ready to order one. When we went shopping we were in for a shock in two ways. We had not shopped for one for a while and woah!. they went up over the years and were more than I had thought! The second shocker was availability. We went to and called several stores asking about models we were interested in. We even went as far as calling Casper Wyoming (3 hours away) to see what they had. Most of them said if we ordered now we would get our tub anywhere from 4-6 months. Then we stopped by one in Rapid City and walked through the showroom. When we asked the salesman about a particular one he said he had one coming on the truck "next week" that was not spoken for. After a little negotiating, we bought it on the spot!

"Next week" turned into 3 weeks but that gave me time to get things ready at home. I had put conduit under the concrete from the house to where we wanted the tub so on one of our warmer days I ran wire through the conduit to the disconnect we had installed when we wired up the house during the summer of '19. The big day finally came when they called to deliver the tub! The delivery guys arrived, put it in place and hooked it all up for us! 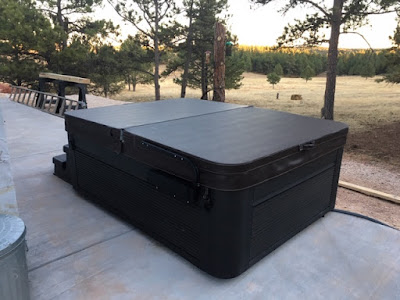 So at least I have the hot tub do drown my sorrows in, literally and figuratively. My only hope is that my time in the woods pays off and I able to throw my big buck on the kitchen table and once again reclaim my manhood!

Posted by Jim and Barb's RV Adventure at 3:51 PM