Although Zoey had been on a road trip to and from North Dakota in April, this week she had her first road trip as a part time RV traveler. Our first day only took us 130 or so miles to Devil’s Tower Wyoming. As much as we have been in this area this is one sight we had yet to see. We were impressed by a few things. First was the amount of traffic there was to get into the park. The line to get in had to be about ¾ of a mile long taking us a good 30 minutes of inching our truck up to the pay station. This is where we had our first opportunity to use Barb’s newly acquired Lifetime Senior National Park Pass! No more $80 each year for the annual pass, as long as we don’t lose this one we are set for life!

The second thing that impressed us was the reason we came here. We had seen numerous pictures of Devil’s Tower over the years but none of them matched the beauty of the real thing. 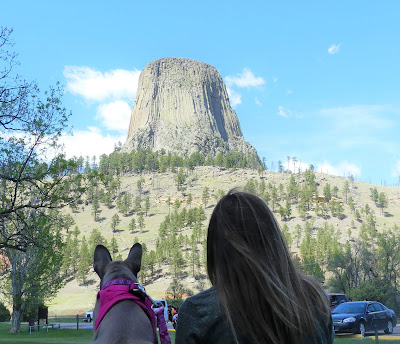 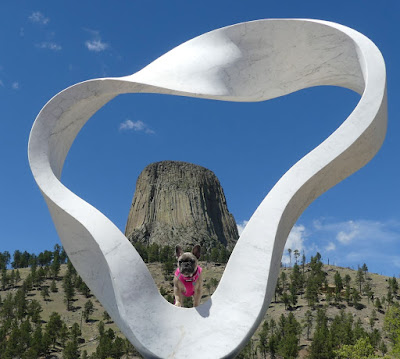 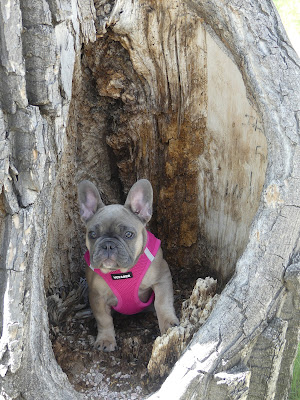 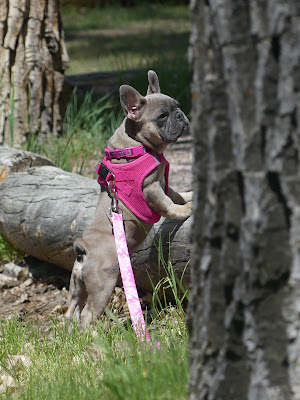 We stayed right in the park, only $10 with the pass. As busy as the roads were, we were surprised to see that the campground was only about 1/2 full. By the time the sunset however, the park was full. 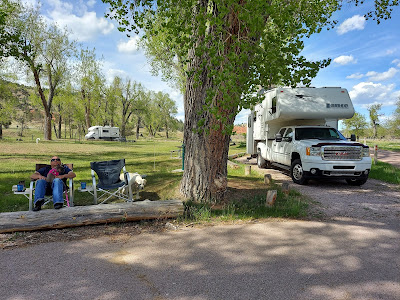 The next day we were on the road by 7 and continued our journey west where we went through some beautiful country. 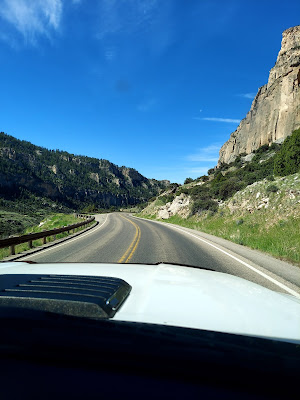 Our destination for the day was Cody Wyoming and the Buffalo Bill Museum. This museum has a huge gun collection and has been on our bucket list for several years.
My main interest is early frontier rifles like the flintlocks up through the lever actions that won the west.
They had rifles, pistols and shotguns from every era..... 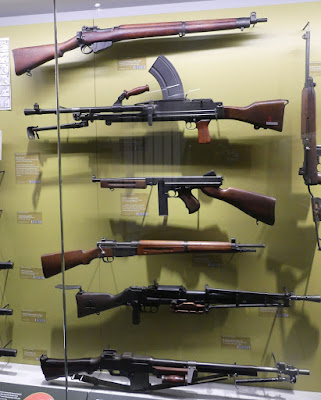 After leaving the museum we drove about 40 minutes we the North Fork Campground in Buffalo Bill State Park where we spent the night. The sign said camping was $18/night but when we checked in they added a $12 day use fee bringing the total to $30.
It was a nice park with great views but certainly not worth $30. 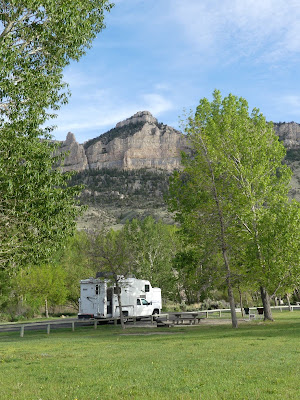 We were off and driving early the next morning again driving west. We entered Yellowstone National Park through the East entrance. We entered the park about 7am with little of no traffic. 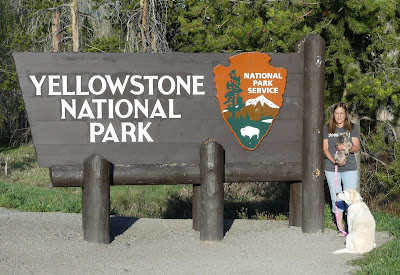 Although Yellowstone was just a drive through for us this trip we did stop and take a look at a few attractions. Such as Zoey at an overlook viewing Yellowstone Lake..... 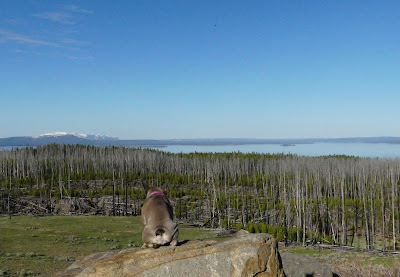 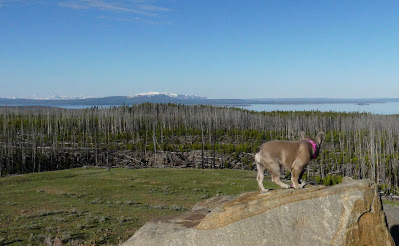 She was not a fan of the sulfur smell at the Mud Volcano...

And she was a little more than curious at the sight of her first buffalo... 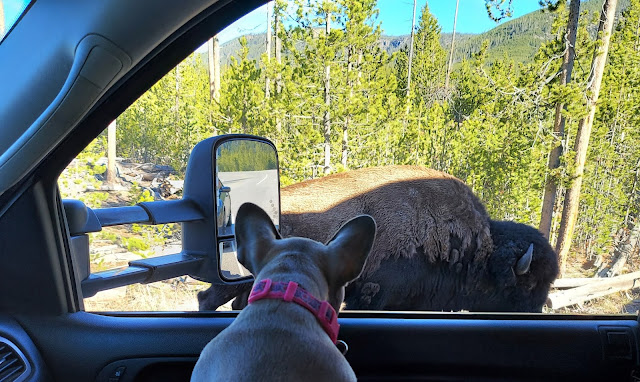 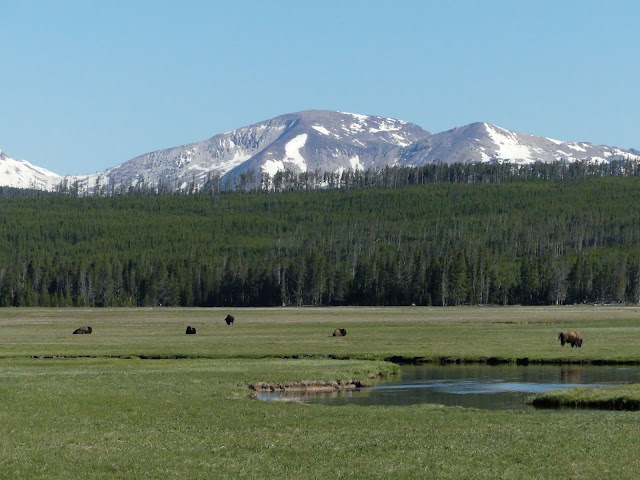 By the time we were leaving the park at West Yellowstone traffic had picked up. In fact there was a line of cars 8 1/2 miles long in stop and go traffic just inside the park entrance!
We had a long day driving just over 500 miles but we had reason for it. We made it just west of Boise where we stayed at Caldwell Campground and RV Park at $37 with FHU. The hook ups were necessary that night as it was 95 when we arrived and the air conditioning was much appreciated. It was an okay park; crowded with lots of long term residents.
Continuing west we ended the next day in Redmond Oregon where we checked into the Deschutes County Expo Center RV Park. The reason for our long day the day before? We had a hot dinner date with our FT friends Dale and Ruth! It had been a couple of years since we have seen them and by speeding up a little we could be there a day early and spend some time with them. 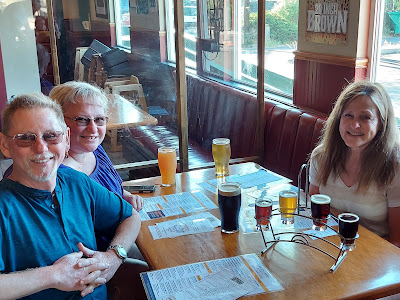 We went to dinner then back to our place for more visiting and playing with the dogs. It was nice to catch up with them!
Our last day of travel (for a while) took us south to our attraction for the day.... The Newberry National Volcanic Monument. There are several sections to this monument spanning over about 30 miles. Our first stop was the Lava Lands Visitors Center where we drove up to the top of Lava Butte.

This cinder cone is a result of an eruption several thousand years ago. It is cool to see how the lava flowed for a mile or so from the cone where there is nothing but a lava field then the trees start again.
Next, we traveled about 20 minutes down the road to the Lava River Cave. At over a mile in length this lava tube offers self guided tours after a short orientation. After the orientation they offer lanterns for rent at $5, "That's how they get you" I tell Barb and we head off to the cave with our trusty flashlight in hand.
The temperature in the cave is a constant 42 degrees and once you are in the cave it is dark. I mean can't see the hand in front of your face dark. We headed off down the path taking in the sights of the lava tube. Once we got about 3/4 of the way to the end. I asked Barb "Is it my imagination or is the flashlight getting dimmer?" "Definitely getting dimmer she said". With that we started hightailing it back to the entrance. We did not want to be the poor saps too cheap to rent a lantern and needing to be guided out. We made it out without the flashlight dying but we were both sweating from double timing it out of the cave. How does one sweat when it is 42 degrees?!?!?
Next up was Paulina Lake, one of two crater lakes in the area. If we are ever in this area again, we are camping there!

Adventures done, it was time to complete our journey to Forrest's house in Klamath Falls. Since we were here last year Forrest and Somer had a garage constructed that included a level spot for our camper, water and power! 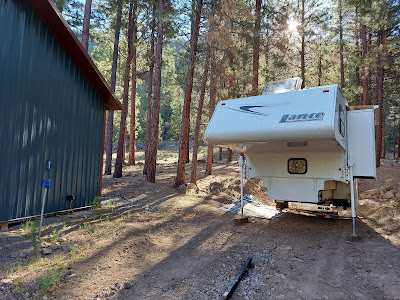 So we are all set for the next few weeks of visiting, adventures and a couple of projects!
Posted by Jim and Barb's RV Adventure at 9:15 AM