We country folk have to do something to keep us entertained in the dead of the winter. Well, Custer came up with a way to do it in style. This year marks the 10th anniversary of the Burning Beetle event here in Custer. We are usually somewhere warm when this life changing event occurs but this year we are here and are ready to have our life changed!

We arrived at the Custer High School prepared for the cold. Jacket, hats, gloves and all available pockets lined with beverages guaranteed to warm your soul. Having never been, we did not know what to expect but our expectations did not include a marching mob carrying pitchforks and torches chanting "Burn Beetle Burn!". Nor did we expect the huge fireworks display and ash from the burning beetle to shower the crowd.....Good times!

Dino, just for you, I included a video of the momentous event so you can see what you missed. Here is 2 minutes you will never get back! You'll have to forgive the watermark; I am testing a new version of Filmora.

Once that was done, we headed downtown to the Gold Pan Saloon who had a small three-piece country band. They even allow dogs into the bar!

Then it was off to the Custer Beacon where things were anything but calm and quiet. They had a heavy metal band playing, the place with filled with metal heads of all ages showing off their dance moves. Three days later, my head still hurts! It was so good to see people out living their lives and having a good time!

Fun over and head pounding it was time to get back to work. The promise of another warm day has me looking forward to sunrise.  It is 33°F at 6:45am as I write making this the third day in a row with temps in the mid 40's!

Work on the inside of the house is on pause as we take advantage of this respite from winter. I have been working on siding. My goal is to have it all done by the end of the week. The vapor barrier was put up in June of '19 when Jim and Diana were here for a visit. We should do a testimonial for Typar as it is holding up great after being exposed to the elements for 2 1/2 years!

We spent one day cleaning the garage. This has not been done since..... I don't know when, so it seriously needed it. Saw dust was everywhere, scrap pieces of wood, pieces of tile, you name it, it was on the ground there. Once we got it all cleaned and organized, we stepped back and reviewed our progress. For a 50x30 garage, it is still full!

We had three big things we wanted to get rid of; the old fridge, stove and the table from the RV that we used during construction. Kevin is going to take the stove, the fridge and table we listed on Facebook Marketplace for free. That is when we learned a valuable lesson.... the whacko's come out of the woodwork when you list something for free on Marketplace! We started getting inundated with messages. A few said they would take them but could not pick them up until this weekend. One wanted it but did not have the gas to come get it, another wanted us to deliver them an hour and a half to Rapid City. In the end we got rid of both in a day. I ended up delivering the table and chairs to a mobile home about 5 miles from us. They were going to come get it but they have "the sickness" so I offered to just drop it off in their driveway. The guy who got the fridge also lived about 5 miles away and was in the process of building a house and needed a fridge, so it worked out perfectly!

Garage clean, it was clear for me to lay out some metal siding and make a mess again! The first piece of siding was one I had been putting off for quite a while. First of all, I needed the hip roof done before I could do it, secondly, it was 16' tall and included a part of a window, the stove vent and a water spigot. Kevin came over and helped me measure everything out then I went about cutting the holes and edges. Kevin then came over again and helped us install it. It took all three of us but we got it up and miracle of miracles, I had cut everything right!

That done, I could work my way up the hip to the end of the building! Next up was the opposite corner of the house where the other hip is. Another day of cutting and fitting and this end was done as well!

Meanwhile, inside Barb started another new project when she decided to make the bench for the nook in the laundry room.

She is going to up a lift up lid on the bench to store the dog food, a fence board back on the wall and cubbies up above for hats and gloves.

Sunday, I worked inside, watched football and worked on the dressers. I managed to cut and fit each of the pieces for the front face. Next up is the drawer boxes!

We have one more nice day tomorrow then the bottom falls out again with the highs in the teens. Maybe I will get those drawer boxes done this week!
Only one dog picture this week. As I was scrolling through some old pictures I ran across this one of Daisy and I at a happy hour down in Quartzsite. You can tell that Daisy and I are both riveted in the conversation. No doubt we were listening to either Steve or Harry telling one of their tall tales! 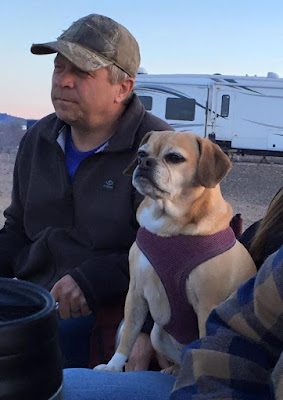 I know many of you were concerned about Barb's CAT Scan.  All went well, they did find two things; The first was that she has some kind of infection in her sinuses. This could be causing her headaches. The second thing....well.... I will just write verbatim what the doctor had written in the notes: "Portions of the brain are unremarkable". I really don't know what to say about that as I think everything about Barb is remarkable.
Posted by Jim and Barb's RV Adventure at 11:42 AM