“Yes!” Was the first word that came out of my mouth. What got me so exciting and thankful at the same time? Let me back up to the beginning of the day. We woke up Monday morning at Roosevelt National Park and got ready for our short 3 ½ hour trek to Spearfish South Dakota. Leaving Roosevelt we headed south on highway 85 which would take us all the way to Spearfish. The scenery went from rugged hills to agricultural fields, to rolling grasslands. It is amazing how quickly the terrain can change when you get out to the western edges of the Dakotas.
Our destination was Rod and Gun Campground just outside of Spearfish. We had tried to get to this campground last spring when we were in the area. Unfortunately the road was still closed from the snow so now we were hoping to finally get there. Barb had been doing some research and thought that Rod and Gun would be a nice, quiet, out of the way campground. The website said that 25’ trailers were the max that this park could handle but Barb had read a couple of reviews from fellow bloggers saying that it could handle much bigger rigs. We had 4 miles of gravel once we got off the main road, when we got to the campground I pulled in and stopped at the entrance so we could walk through and see if we could fit in any of the sites. There were two problems; one there were no sites big enough for our rig and two, it was a dead end road with a small turn around. Barb remembered that there was another campground a mile of the road so we thought we would check that one out. Backing out and getting on the main road we made our way to the next campground and pulled in. Again we parked at the entrance to see if we could fit in any of the sites. Luckily both campgrounds were totally empty so we were not in anyone’s way. The nice thing about this campground was that it had a circle drive encircled with large rocks so at least we could get in and out. By this time Barb and I were getting tired and a little frustrated but although tight, we thought we could make it into one of the sites. The next thing she said to me was “Careful you don’t hit a rock”, that’s when I handed her the keys. Now Barb is one of the best drivers I know, she has driven horse trailers for years and the 5th wheel as much as I have, she certainly would not hit one right?????? Around she went, me walking beside the inside tire to guide her if she needed it. At the tightest spot the rear trailer tire about 5”s from the rock when she went by it, that’s when I heard……crunch! Daisy and I made our way to the front of the truck to see that she had hit a rock with the front outside tire smashing the wheel cover! The first thing out of my mouth was “Yes!” She said she was so intent on watching the mirror to make sure she missed the rock to the rear, she did not even see the one up front. I just started laughing saying “I am so glad that was you and not me!” We both laughed and she said something like…..”You’re not going to blog this are you?” The first thing I did was got the camera and said “Of course not honey!”


Ends up we could not fit into any of the sites at that location either so we decided to make our way to Ditch Creek Campground where we stayed last spring. Well, we set the Garmin for Ditch Creek and it did it to us again! If you recall one of our first adventures “Don’t Trust Your GPS” Garmin sent us down a dead end road that nearly ended our adventure before it really started! Fool me once, shame on you, fool me twice….well, it did not fool us this time! When it told us to turn right on county road 321, we looked before we turned and what we saw was a road that was filled with large rocks, going up hill and not even wide enough for the truck! We made it to Ditch Creek Campground 2 hours later and were set up just as the sun was setting, 8 hours after we left Roosevelt, so much for the short day!


The morals for today……Although you cannot believe everything on the internet, some things should be believed,….. Sometimes it is better to laugh than cry…….A bad day on the road is better than working!.....When the going gets rough, give Barb the keys…


Day two we went into town to get connected and download some geocache locations as that was our plan for the day. I don’t mind hiking, but I need to have a purpose or goal. Geocaching is the perfect solution for that. Barb chose a half a dozen that looked interesting and after we walked Main Street of Hill City away we went. The first one was really easy, you could basically drive within 50 yards of it and it was just film canister with a log. The second one was a little more challenging requiring a ½ mile walk in hilly terrain. The cache was located at the base of a pretty cool rock formation and had some unique items in it. The most unique being a Hello Kitty wristwatch. 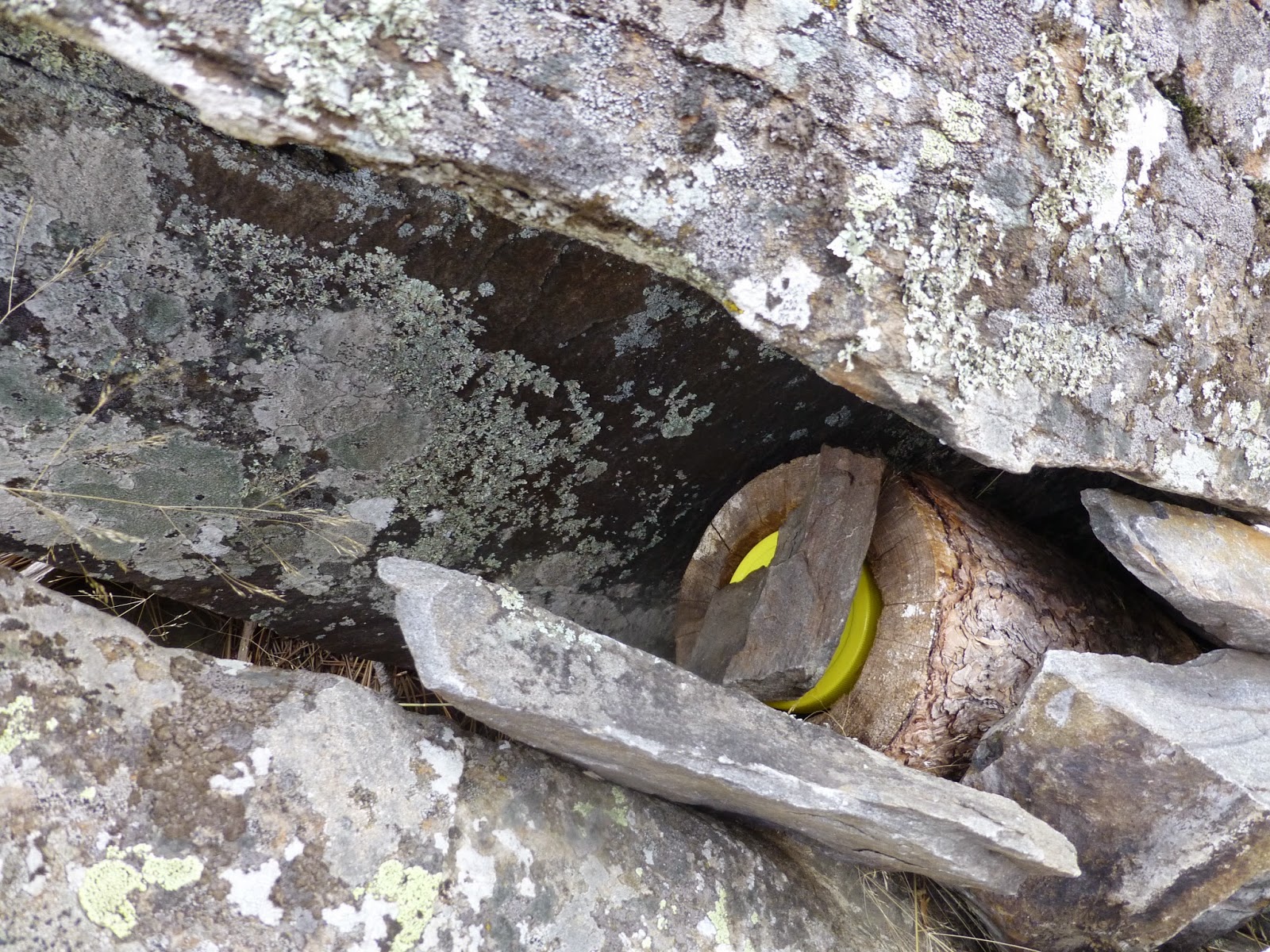 The third one….oh the third one, where do I start. The description stated that it was on top of Flag Mountain where the old fire watch tower was located. Armed with coordinates we headed that way in the truck. We drove up the hill (had some great views!) and drove what felt like around the peak but no matter what we could only drive within a ¼ mile of the coordinates. Now, a ¼ mile is nothing but when that ¼ mile is almost straight up it makes you think twice! After driving up and down the road a couple times looking for a road that brought us closer we decided there must not be one, parked as close as we could and started our ascent.


﻿﻿﻿﻿Huffing and puffing up the hill we went, I kept asking Barb “How much further?” She would relay 2 tenths of a mile, then 1.5 tenths, 1.2 tenths….. the higher we got the steeper it got and the more frequently we had to stop. Near the end we would go up and 10-20 feet at a time then rest. Finally, we climb over a rocky ridge and what do we see? A frick’in road! Unbelievable….. Well actually it is believable, of course an old fire tower is going to have a road going to it! The view from up there was spectacular, the pictures below do not do it justice. Only the base of the fire tower was remaining but you had to wonder the work that went into building that back in the day. As we continued to search for the cache, it said it was downhill! I was like hell, no I am not going down there! I stayed on top while Barb went down to look for our treasure. She found it in pretty short order, signed the book and smashed her finger with a rock hiding it again! So if you are ever outside of Hill City, looking for the geocache on the top of Flag Mountain, take the road and look under the rock with blood on it! 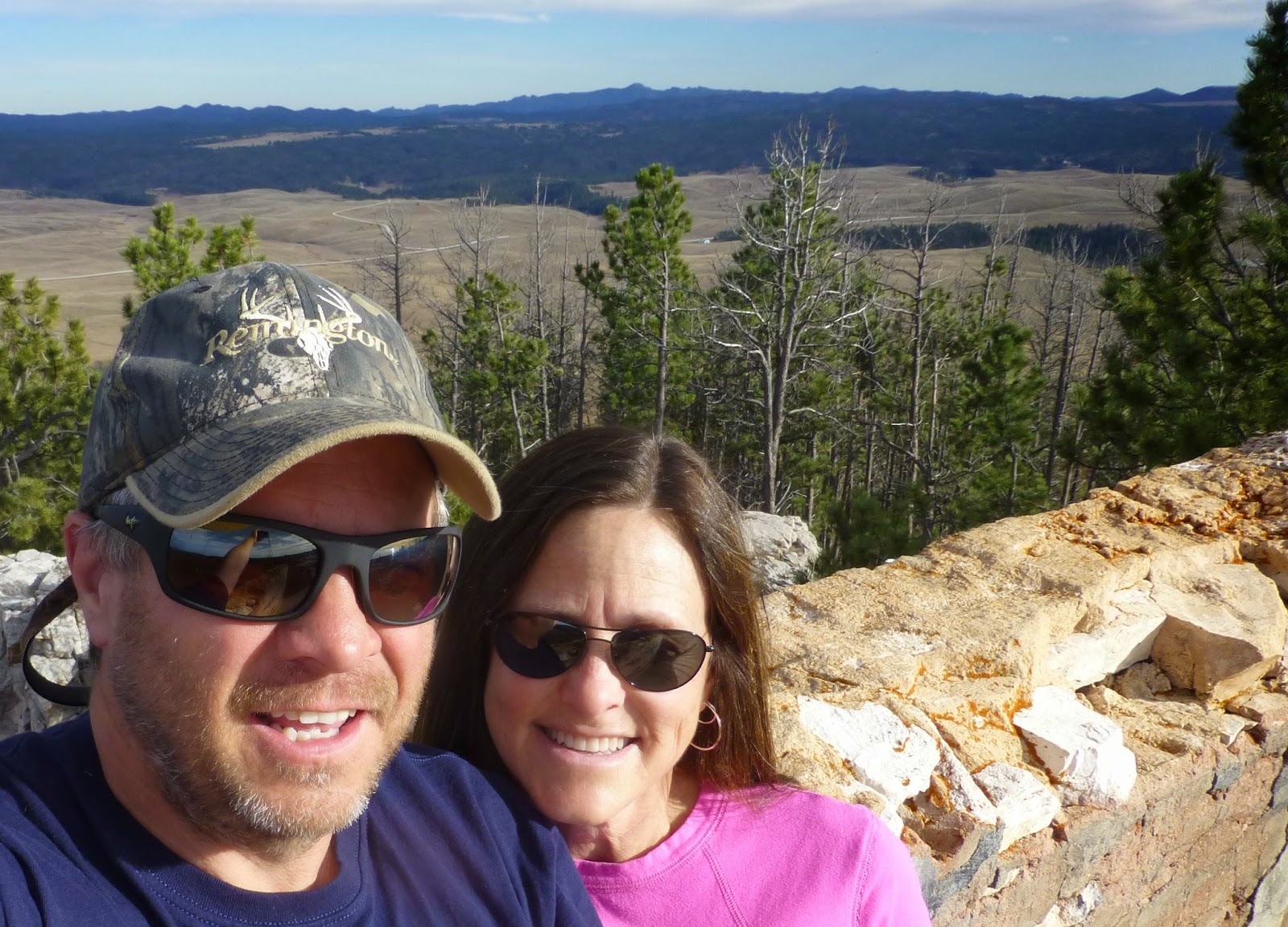 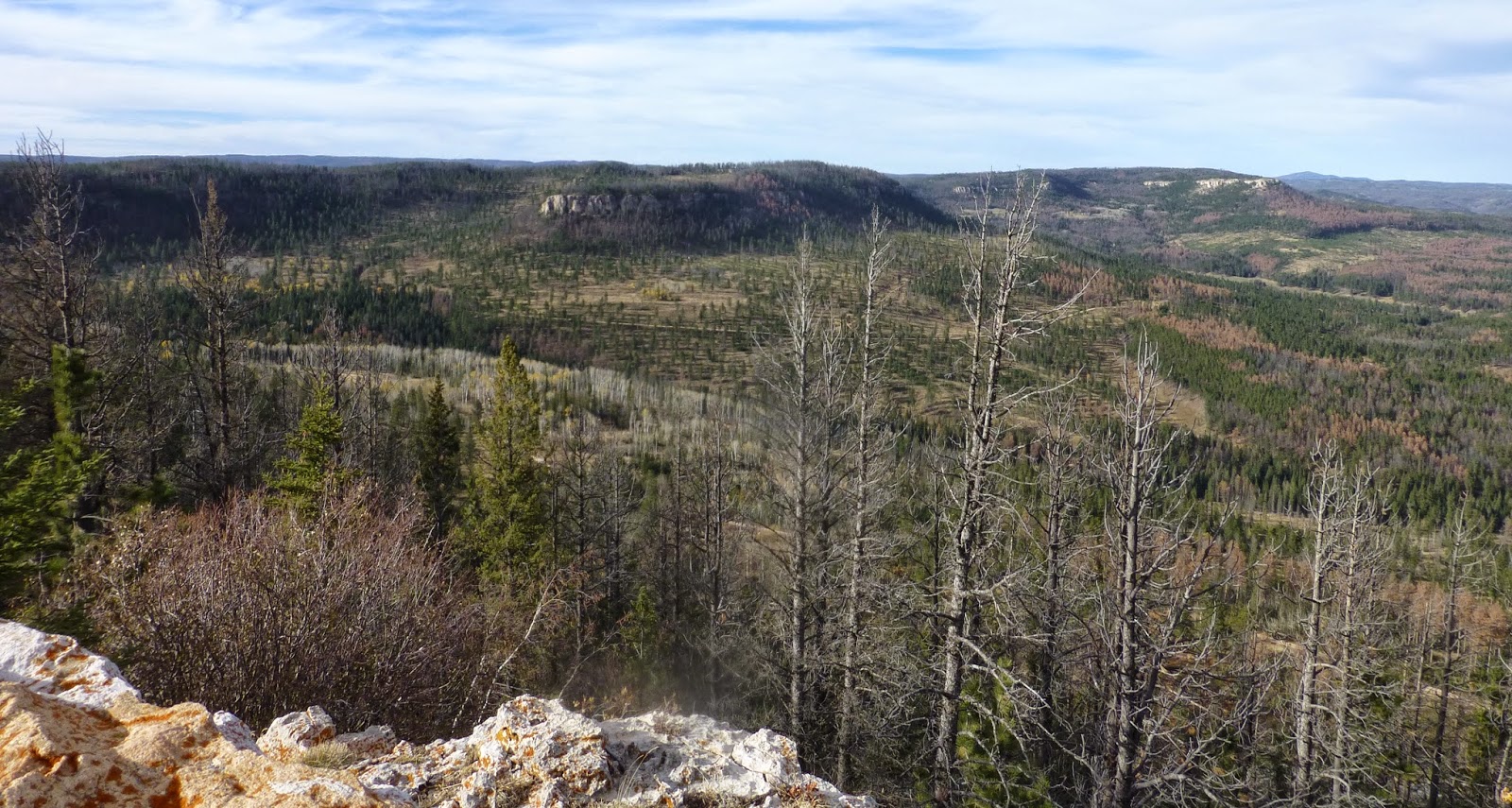 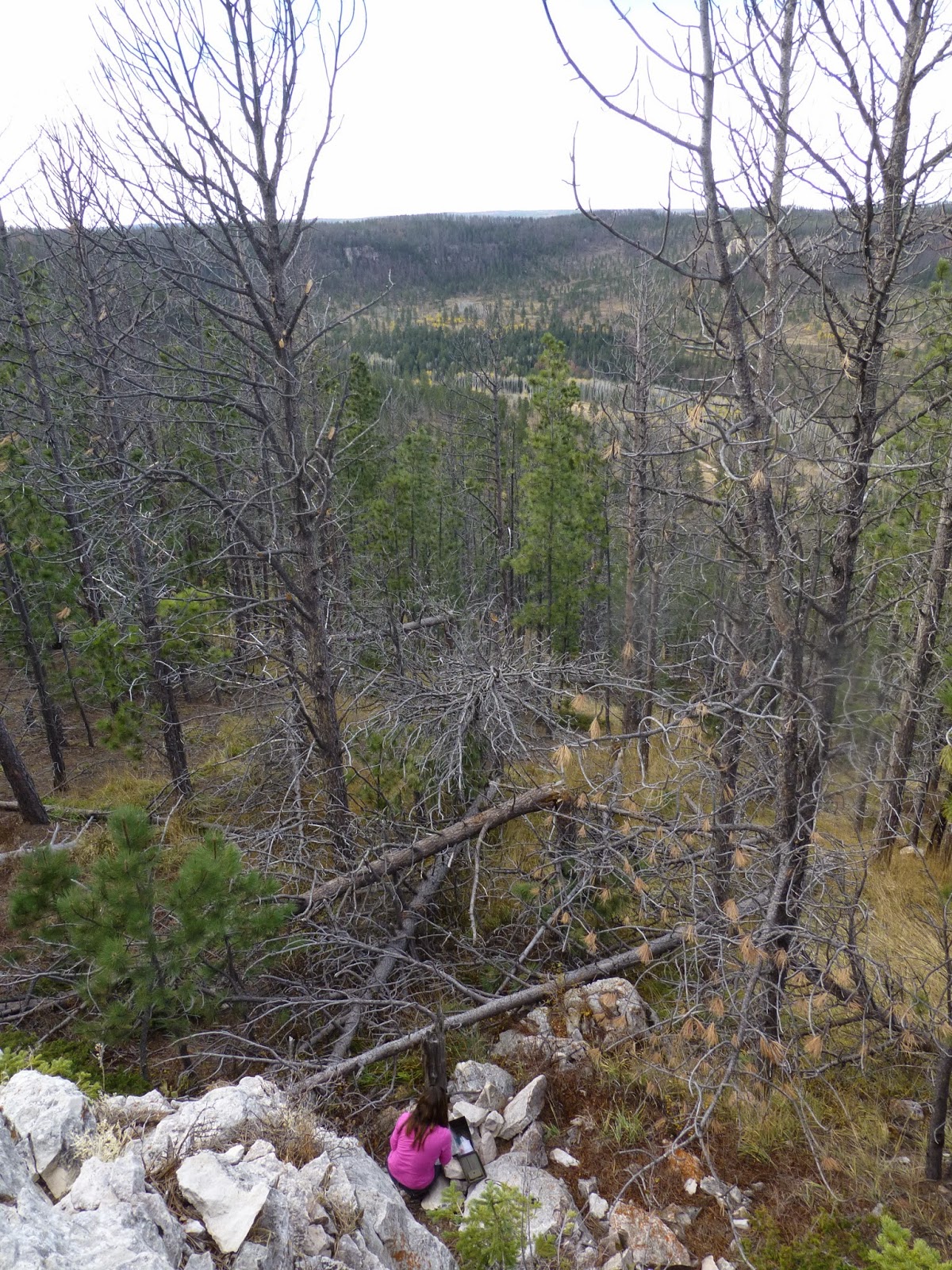 The way down went much quicker I think Barb spent most of the time sliding down on her butt. I asked her what she was doing and she said something about gravity and trying to stay in control. After that we called it a day, we had probably walked just over a mile all day but we were whooped!
Posted by Jim and Barb's RV Adventure at 6:10 AM