When we last left you I asked for your votes on three pictures which were taken at Zion during our Thanksgiving visit. One was taken by Shane, one by Forrest and one by me.
With 9 out of 11 votes the winner is…….Shane! with picture #3. It really does capture the essence of Zion. Forrest (picture #1) and I (picture #2) finished well behind. Thanks for your votes, it created some fun family rivalry.


The days since returning from Zion have been cool with highs in the 40’s and lows in the 20’s. We made the most of it spending as much time with the grandkids as possible. Jessica and I were also able to get out to the pistol range one day. Another day Forrest and I made it out to the desert where we flew the drone and shot pistols and shotguns (no, not at the drone).
We were lucky enough to spend the last Christmas with the kids but this year we will be on our own. We decided earlier on that this year we would be further south at Christmas. The fact that we froze up last year pretty much “solidified” that decision. So on the 12th we said goodbye to the kids and while Barb drove the rig, I followed with the Jeep and 4 wheeler on a 5 hour drive south where we spent the night at Virgin River Recreation Area just south of St. George. At $8.00 a night, this is a great spot to stop for the night. The sites don’t have any hookups but they do have clean restrooms and you cannot beat the scenery.


The next day after a short 2 hour drive we pulled into an area the locals call “Poverty Flats” as it is a place where snowbirders come to boondock in the desert and wait out the winter. During the peak of winter there will be several hundred rigs here ranging from $500,000 rigs to $500 rigs. When we pulled in and set up there were probably only 20 rigs in the area so we pretty much had our pick of spots.

On our way through the town of Overton we noticed several rigs camping at the Overton Wildlife Management Area so after we got set up we went back to check it out. When we pulled in we saw that there was about 10 secluded camping sites, ducks and geese flying over and several groups of duck hunters in the parking lot getting ready to go out hunting. We talked to the ranger who said the camping sites were free, first come first serve and a max limit of 8 days. Ducks and free camping? This place was awesome! Why were we parked in the desert when we could be camping here? We headed back to the flats, hooked everything back up and within 30 minutes we were all set up in the WMA! Bad decision…….what they don’t tell you is that about 200 yards away is a silica sand pit that runs 24 hours a day….trains, trucks, dozers, you name it running all hours of the night and every time one of them backed up…..beep, beep, beep! We managed to get a good night sleep but decided that one night was enough. 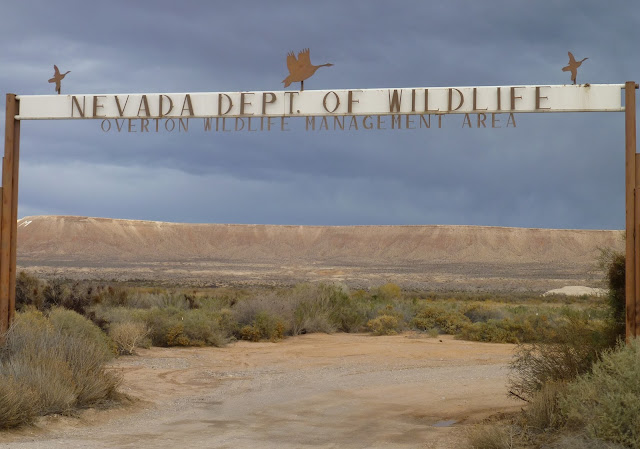 We walked the WMA for a few hours in the morning, hooked up and headed into the Lake Mead National Park 80 miles south to Boulder Beach Campground. We had stayed here last year and really enjoyed the area and the campground (no hookups) at $10/night but the main reason we stopped by this area was to see our friends Steve and Joan who we had not seen since last spring. We spent several days together; went to a cookie exchange, Jeeped into the backcountry to explore an old mine, hiked, played cards and of course going out to eat. It was great seeing them again and catching up!


One morning Barb and I took a really cool hike within 5 minutes of our campground. The hike followed a wash up a canyon and eventually got narrower and narrower until it formed a slot canyon with high walls and only about 10-20 wide. Eventually it deadended at a 15' rock wall. But wait.....there is a rope hanging down from the top! Do we turn around and go back or go up?
A few hundred yards further we encountered some rock scrambling areas and yet another rope climb...... 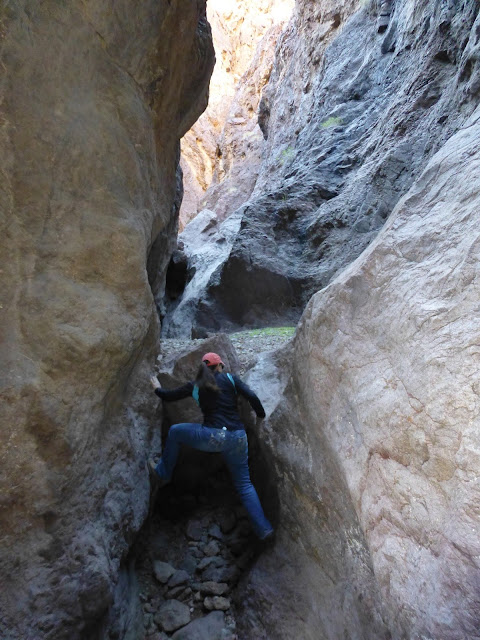 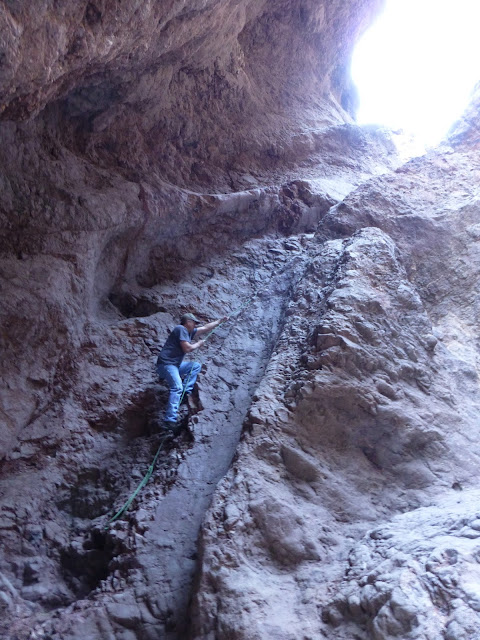 There was a total of 4 rope climbs, I would definitely recommend gloves if you are going to take this hike. The only wildlife we saw was a tarantula and the remains of a bighorn sheep.....oh and one lizard who was very camera shy!
After a few miles we came to an open valley amongst the peaks of the range, we could have kept going but it was time to turn around. If going up the ropes was a challenge I would say that going down was twice as hard. You really had to lean back and "walk" down the ledge. 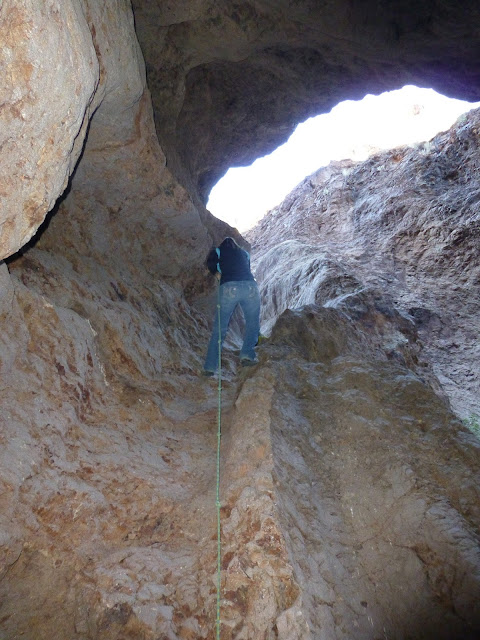 A Lake Mead area visit would not be complete without heading over to Las Vegas to see the nightlife. That is exactly what we did with Steve and Joan on Saturday night. Let me tell you what we saw there is really hard to describe.....from very cool to bizarre. Most of the things I wanted to take pictures of were not "family friendly" If you are in the area, you have to walk Freemont St. at night to see the sights and the awesome light show on the canopy. Notice anything unusual or interesting in one of these two pictures? 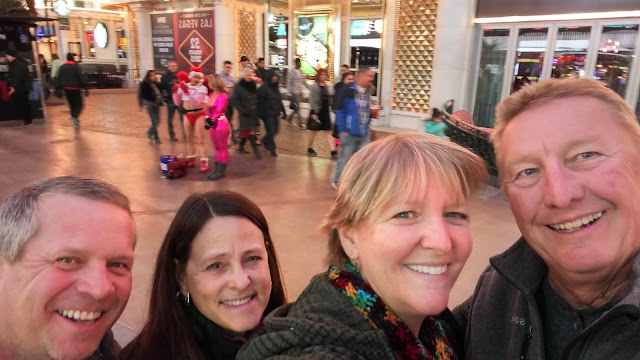 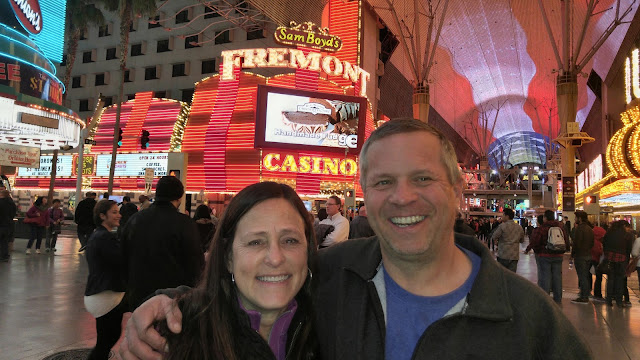 It has been 6 months since we have been in the southwest and we saw a couple of SW oddities that we had not seen prior to first coming to this area. For the seasoned RV'er you probably see these things all the time but for those up north, I thought I would share two of these oddities... The first are these numbered signs in depressions along some roadways.

Any idea what they area? This one is actually pretty easy, they are foot indicators in water runoff areas. Flashfloods happen very quickly in this area so the water over the road can easily get 2,3,4 or more feet very quickly. Despite these warnings, people drive into the rushing water anyway.

This next one is a little more challenging....... You will see these fences in Lake Mead National Park, they are about 18 inches high and run for miles. 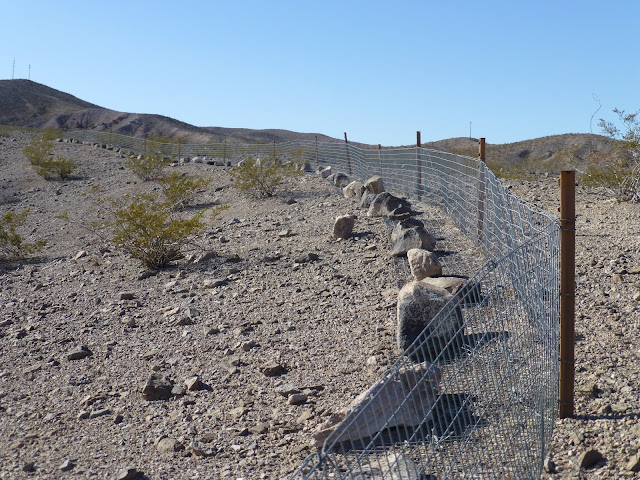 Give up? They are tortoise fences to keep the rare Desert Tortoise from crossing the roads. They all funnel to bridges or culverts so the turtles can cross under the road if they really want to.

Next up our first long term Quartzsite adventure!