From Arizona to South Dakota!

Our trip north from Arizona to South Dakota was relatively uneventful. That is compared to what it could have been. Filling up in Parker our range with a full fuel tank went from 300 miles to 590 miles. What a big difference traveling without our rig! The other difference is the ability to drive 75mph rather than 55-65mph with the 5th wheel. With smooth sailing this alone would have cut 4 hours off our travel time!

I say “would have” as we just cannot seem to have smooth sailing. All went well the first day. We did not leave the DMV in Parker until almost 11:00am. We pointed our truck north with our destination being Salt Lake as this is roughly ½ way home. With the later start, we did not check into our hotel until 8:30pm. We actually stayed in Sandy Utah which is where our daughter and family lived for many years. The bonus of staying here is that we were able to visit our favorite sushi restaurant! We got a few rolls to go and had a late dinner in our hotel.

We were up bright and early the next morning (3am actually) and ready to hit the road but a look at the road conditions on our travel route put the brakes on that. High winds, slush and ice caused the closures of I80 from Evanston to Rawlins. According to the Wyoming DOT it was going to be closed for 8-10 hours.
So much for getting home early…. But this gave us time to hit the local donut store and just relax in the motel room for a while.

We hung out in the room until the 11:00 checkout time. The WY DOT website was updated but still showed I80 closed for 8 hours. Looks like we won’t we making it home today after all! Barb called ahead to Evanston to see if there were rooms available there should we decide to hit the road. They said they had plenty of rooms so away we went! Barb continued to watch the road conditions and it looked like they opened the road to Rock Springs so Barb called a motel there and they too had plenty of rooms. So with luck we would get 3 hours closer to home.

The roads were not bad. It was windy but they were dry. Arriving in Rock Springs traffic was still heading steadily west so we just kept on a truck’n towards Rawlins. Maybe we will make it home! All went well until we were exactly 7.9 miles from our Rawlins turn off when everything came to a halt. No idea what was happening, we were just stopped dead for as far as we could see. Barb jumped on the internet to see what was up and found that they closed the interstate again! She also found a traffic camera 5 miles ahead of us and this is what it looked like….
It was backed up well over 5 miles ahead of us and several miles behind us, looks like we will be here for a while. It was 18 degrees with winds about 30mph but people were still getting out of their cars and stretching their legs. We sat for a little over an hour when traffic started crawling again. We eventually made it to Rawlins where we saw a sign stating that I80 was closed. Luckily we were turning north on WY 220. We stopped, filled up and talked to a police officer at the gas station who said 220 was open but they were advising no unnecessary travel. Having lived in Wisconsin and Minnesota most of our lives we knew what that meant and carried on to Casper! There were a couple of wind-blown areas but the roads were just fine. We pulled into Casper just after 6pm and had a decision to make; do we carry on the last 3 hours or do we stop for the night. Not wanting to push our luck we decided to get a room, get a good night’s rest and finish our journey in the morning.

The next day the last 3 hours were smooth sailing and before we knew it we were pulling into our driveway! The first order of business was to unload the truck. With no 5th wheel filling up one side of the garage we were able to pull right in and unload everything with ease.

The first order of business was to check out the sheetrock that was installed while we were gone. They did a good job but left the place a dusty dirty mess.

This is our first time here without the 5th wheel and we quickly realized how much we relied on it. We had no bathroom/shower, we had no kitchen for cooking and doing dishes  and all assemblence of organization had gone with the rig.

The next order of business was to install (make) a toilet..... 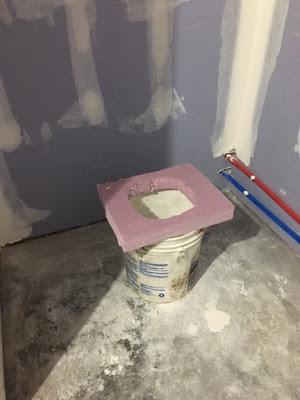 Whew, getting that done I needed a break. The next day we spent the day in Rapid City running for store to store. We came home with a real toilet, bathroom vanity, a laundry tub, a paint sprayer and bags and bags of miscellaneous items.

Wednesday while I was busy installing all these purchases Barb went back to Rapid City to buy more. I managed to get the toilet, shower head, bathroom vanity and laundry tub installed (after several trips to the hardware store in Custer). The last two are just temporary but will work for the next year until we get those areas fully finished.
When Barb returned she arrived with a new mattress, a box spring as well as the TV for the living room (we moved the existing one in the living room to the bedroom). Kevin and Cheryl were nice enough to loan us one of their bed frames until they need it when their place is done. 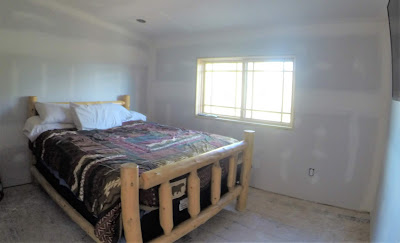 And thanks to our friends Dan and Bonnie we also have a fridge and a stove! They are remodeling their place and donated their used appliances to the needy.
Now that we have the place livable we can start on construction again! The weather is a lot different from that in Arizona but unseasonably warm weather for January here in South Dakota makes it very bearable.  We will take 40's anytime this time of year!
Posted by Jim and Barb's RV Adventure at 5:22 PM