Day 632 in the camper, Barbs says she is not feeling well and I need to stay 11’-7” away. I thought the rule was just 6’ but she insists it is 11’-7” which ironically is 1” longer than our camper. So now I stand outside the camper and she just throws food scraps at me now and then. If I try to come in Dakota snarls her teeth at me and Daisy? Well, she will let anyone in who give her food.

Actually it has only been about 2 weeks and so far so good. It is A LOT smaller than our 5th wheel especially with two dogs but we have our own little places and it is not bad at all. If all goes well we will be traveling well into September so ask me again in a few months.

We all have our assigned spot in the camper and only one person is allowed to move at a time. Barb’s spot is at the dinette, Dakota’s is under the dinette, mine is generally up on the bed and Daisy is usually wherever there is food and when there is no food she is up on the bed with me.
Although when we leave the dogs in the camper alone, this is what we return to.....
Barb allows me to sit at the dinette when we eat but then I have to get out of her space again. Whenever I do that I have 2 pair of eyes staring at me from under the table looking for scraps. 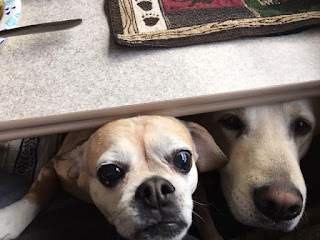 I thought the hardest thing would be no TV but so far it has not bothered me at all. We have some DVD’s and the computer keeps us pretty well entertained. And I am on my second third book (ones with no pictures!) so I got that going for me.

This week was DeAnne's birthday! We all got together and had a cook out at Chris and Holly's. I promised DeAnne I would not mention how old she was....
Another day Barb and DeAnne decided to reshingle the old barn. A huge undertaking but they got it done in one day!
And yet another day we drove over towards McClusky and visited Dan and Jeannie (Chris' uncle). We had not seen them since we were in Florida in the winter of '18. Jeannie broke out a couple of her accordions and the girls had a jam session! 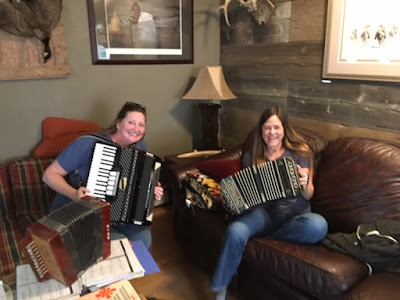 Someone left a comment (Chapter 3 Travels) asking how we know Bob and DeAnne. I may have written about in the past but it has been a long while so here goes. My best friend in high school and hunting buddy is also a Bob. He and his wife have two kids one of which went to college in Fargo where he met Holly. Bob told me his son is dating a girl whose dad owns a farm and would I like to go duck hunting up there. Well, the rest, as they say, is history. One thing led to another and after Barb made her first apple crisp using the apples from the trees on the farm we have been invited back ever since. (By the way, if you have not read Chapter 3 Travels they write a great blog.)

Farmer Bob and Chris slowly taught me how to use some of the equipment around here. Dylan, Farmer Bob’s son became a partner along the way. If you want to see the full history on The Farm, check out this post I did in '18.

This week was filled with more field work. The peas are all in and rolled and we have started on the wheat and canola. Evidently the wheat and peas are hardier and can stand a little cold weather where other seed like Chick Pea and Soy Beans you need the soil to be warmer before you plant them. They watch the soil temperatures like crazy this time of year. They are hooked up to temperature probes throughout the state. Optimal temperature for planting is somewhere around 50 degrees which usually does not occur until the first week of May. This year they were seeing 50-54 the last week of April which caused the peas to germinate earlier than usual.

Have you ever seen a farmer out walking his field, kneel down and start looking around like they lost a contact lens? Well, they are actually checking their field for germination. There is a tool you use to dig into the soil and see at what stage the seed is in. There are several stages. These are not technical terms, they are more like “farm terms” Again, something they probably learn in their secret meetings.

"Swelled" is when the seed, well, swells and starts to crack open. Then there is "germinated" which is when you first see the plant coming out of the seed and start working its way to the surface. Then there is "emerging" when the plant starts to come out of the soil.
They will watch this very closely in the initial stages of planting as they need to spray the field for weeds typically between swell and germinate. Once it hits this stage they have a day or two to get the field sprayed as once the seed emerges the soil the spray will kill it. We were checking the fields the other day and most were swelled, germinated and still had a ½” to an inch before they emerged. But one field had some seed already emerging so they needed to drop everything and spray that day. Interesting, one would never know that much goes into it after the seeds are planted.

Besides the rolling and rock picking I talked about in the last post I have been helping get seed orders ready to go out to customers. They will say something like “Put 650 bushel of wheat out of bin 23 into the grain cart”. The first thing I have to do is blow out the grain cart so any seed from the previous order is out, do the same to the conveyer, then calculate how many pounds 650 bushel is (650 x 60 = 39,000). Then when you are filling the cart to stop the auger at 39,000. A nearly impossible task since it is filling so fast but I can usually get it to within 100#.

Chris’ mom (Sue), dad (Bob) and sister (Chelsey) came for a visit for a few days. Their first day here Bob went out to the field to ride with Chris and buried the truck in a low spot. We pulled it out with the planter and he rode around with him for a few hours and on his way out he managed to get the truck stuck again! We gave him a rash of crap for getting the truck stuck not once but twice in the same day!

The next day I was out raking flax residue. We have to rake it into windrows and burn it as it is really not good for anything else. To do this you go through the field with a 70’ rake dragging the field. You lift the take every 50 yards or so creating the windrow. A very slow and tedious job.


So there I was mindlessly raking the field. 50 yards lift, 50 yards lift, turn around, 50 yards lift…… I was thinking of Chris’ dad Bob and the rash of crap we gave him for getting stuck and how bad he felt. Being the good friend I am, I decided to do something to make him feel better and drove the tractor and rake into the wettest spot in the field and buried it up to the frame. 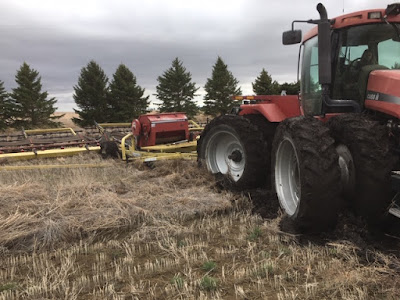 That’s what friends do…. This took all the pressure off Bob. We had to disconnect the rake, get the tractor out then Farmer Bob had to come out with the quad-tract, hook up to the rake and pull it out. I swear that quad-tract can go through anything!

So with roughly two weeks in the books we have a little over 1,300 acres planted and are 1/4 of the way done. Now that it is warming/drying up we hope to get the rest in within the next two weeks!

Posted by Jim and Barb's RV Adventure at 5:15 AM