Before you start sending flowers, sympathy cards and planning benefits I should probably explain what Circadian Rhythm Disorder is.....Basically it is when your internal clock does not match the actual time of the day where you are. During our 4 days, 3 night trek from North Dakota to Klamath Falls Oregon we covered almost 1,500 miles and 3 time zones. Three time zones you say? Should not be an issue, but for some reason this trip really messed up our internal clocks. We are typically early rises but with the time changes we found ourselves waking up earlier and earlier.

The first leg of our journey took us from Douglas, North Dakota to Lewistown, Montana. This 427 mile trek took us a little over 8 hours only stopping for fuel and dog breaks. We stayed at the Kiwanis Club Campground/Rest Stop on the west side of Lewistown. The Rest Stop and all the facilities were actually closed but the sign posted informed us that self-contained campers were welcome to stay for the whopping sum of $0.00!
Like most rural areas we have been through life seemed to be going on like nothing was going on. Bars, restaurants and other businesses were open with very few people wearing masks. Some of the restaurants were take-out only while others offered inside seating. We opted for a great American staple….McDonalds.

The Kiwanis Campground is right next to the airport and has a great view of a mountain range to the south. Shortly after getting settled and tired from our long drive we hit the hay pretty early. With the time change from the Central Time Zone to the Mountain Time Zone I remember it being somewhere between 7 and 8 when we went to bed.

The time change means nothing to the dogs so they were up, hungry and ready to go at....wait for it....3:30am!  After they took their walk outside and were fed I forced myself to go back to sleep but Barb was up for the duration.

Our next leg was another long one from Lewistown to Superior Montana. We took Highway 200. The scenery west of Lincoln Montana on 200 was some of the prettiest we have seen in quite a while. Definitely an area we would like to explore (and fish) in the future. Barb found a nice little camping spot near Superior on at the Clark Fork River Big Pine Fishing Access Site. Big Pine was named after…..can you guess? A big pine tree! Standing at almost 200’ tall, this 350+ year old tree is the oldest in the state. Imagine what that tree has seen in its lifetime! 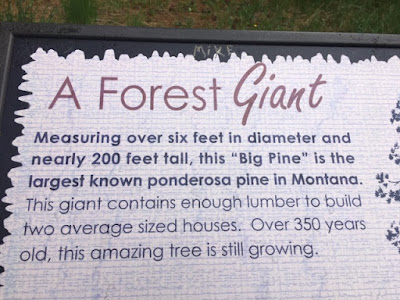 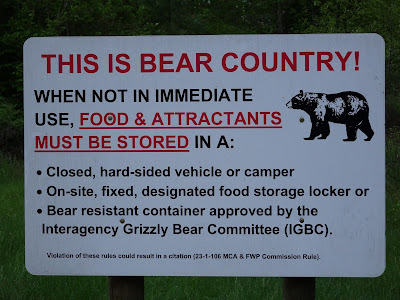 We were the only ones there and had our pick of the 5 sites there. Not big rig friendly with a 23’ recommendation for max length but a great place to stay for a few days (up to 7) if you are in the area.

We again woke up at 3:30am but a light rain lulled us back to sleep. Even with that we had an early breakfast and were on the road just as the sun was rising. A few miles later we crossed into Idaho and changed time zones yet again. So after our breakfast wore off we were ready for lunch at 9:40! (Hey, it had been almost 5 hours since breakfast!) That is one bonus of getting up early, you get to sneak in another meal!

That was our 4 state day; Montana, Idaho, Washington and finally Oregon where we spent the night at the Threemile Canyon Campground/Boat ramp. Under normal conditions this campground has about a dozen free campsites but they were closed so we camped at the boat ramp with 3 other rigs. Another nice place to spend the night. So that made 3 nights, $0 in campground fees!
The next morning we drove two knuckle whitening hours along the Columbia River. We have never experienced winds that strong while on the road. It had to be 30mph sustained with gusts over 50. We were very glad we were not driving the big rig! There were a couple of times we were blown right into the other lane of traffic! We finally turned south towards Bend and eventually pulling into Forrest and Somer’s about 3:30pm on Wednesday. Lily ran out to greet us, we had not seen her since last fall and she has grown quite a bit in the last few months!

We quickly got the camper settled into its home for the next month and Lily gave us a tour of their property showing us what was new. The most obvious being the pair of sheep they bought last month. Snowflake and Frosty follow Lily all around like she is the leader of the pack. Either that or she is the one who feeds them! 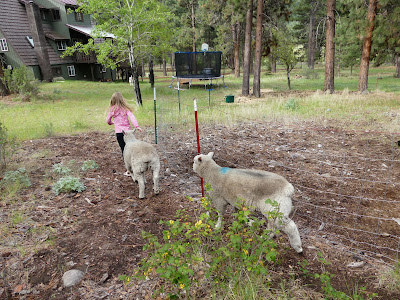 They also got 12 chickens. 6 layers and 6 meat birds. Unfortunately there are only 4 meat birds left, the other 2 have moved to a cooler climate (aka the freezer). 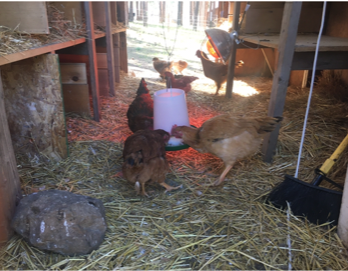 Last week Forrest and the family went hunting morel mushrooms up in the mountains and we wanted to give it a try as well so the next day we headed to a burn area about 40 minutes from their house to see what we could find. We missed the peak of the morel season but Forrest thought if we tried a little higher on the mountain (5,000 feet) we might find some.

It did not take us long and we started finding some... 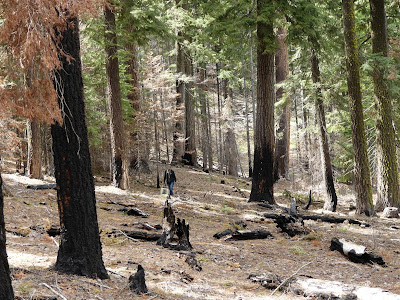 We spent about 3 hours wandering the mountain side picking up about 2#’s of mushrooms. That night we wrapped some of the bigger ones in bacon, stuffed them with jalapeno and cream cheese and baked them. Delicious! The next night we finished the rest with some ribeye steaks.

Morel hunting is a big deal out here as they have the proper climate and a lot of burn areas as that is where they tend to grow the most. Morels can go anywhere from $50-$100/ pound and as much as $250 for a pound of dried ones.

So here we are for the next 4 weeks or so. We are going to wait here until Canada and the U.S. decide to do with the border on June 21st. In the meantime Forrest and Somer have a handful of project that we can work on so there will certainly not be a lack of things to do!

By the way, heard from Farmer Bob yesterday in North Dakota and they got the rest of the crops in this past week. And here I thought they could not do without us!
Posted by Jim and Barb's RV Adventure at 10:50 AM