My Wife is the Most Wonderfulest Woman in the World

Apparently, calling your wife a cow on social media is not a good life choice. Who knew? Time to do a little damage control…..I don’t know what I ever did to deserve such a wonderful, thoughtful and FORGIVING wife. I am not worthy.

I am hoping that is enough so she will go off strike and I can again have a meal consisting of more than saltine crackers and water. Breakfast, lunch, dinner, crackers…. Except Wednesday nights when we get to go to the Pringle Bar for burger night. Now she says “This cow isn’t going to give her milk away for free.” I am not sure what that means because she knows I don’t even drink milk. But I do like it in my malts, that must be what she means and apparently she is going to start charging me for them?

We had big go’ins ons here in The Hills. First off it was Gold Discovery Days in Custer! This is a huge event that included a craft fair with 10 tents and carnival rides. Compared to big cities some might consider this event lame but it is exactly why were moved here. I mean how do you beat a 1970’s era rides and games! Walking through the “midway” and rides brought Barb and I back to our teenage years. 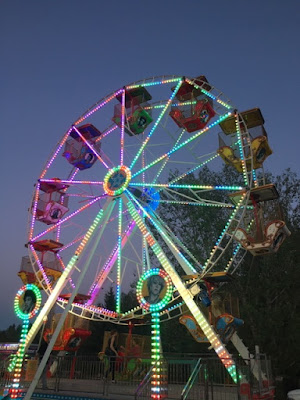 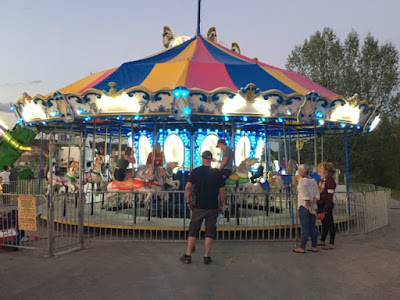 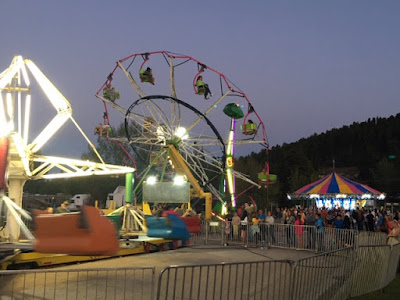 We also tried out a new market in town, the Wild Spruce Market, which happens to have a number of beers on tap so we just had to get a flight! 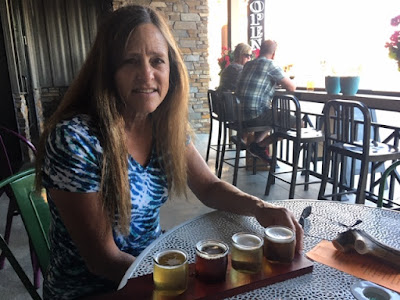 The next big event is that Kevin and Cheryl moved out! Kevin sold out his majority partnership in his construction company, Cheryl put her house on the market and now they are fulltime South Dakota residents! Their arrival is the culmination of years of dreaming and preparation. We could not be happier for them and are excited to have them here. Over the next few months we will be working hard on their house to get it ready for the winter.
Monday marked the arrival of my good friend Doug from Wisconsin. Doug and I met in….probably 1987 or ’88 and have been great friends ever since. We have one of those friendships that endure time and distance.

He retired from his professional career a little over a year ago and now has time to do what he enjoys. He is also one of the most talented taxidermists you will find. All of the head mounts, fish and skins you see in our pictures were mounted and prepared by Doug. The additional bonus of him coming out is that he delivered 3 more deer mounts to us! These mounts were particularly special to me as these were my South Dakota archery deer from the last three years! 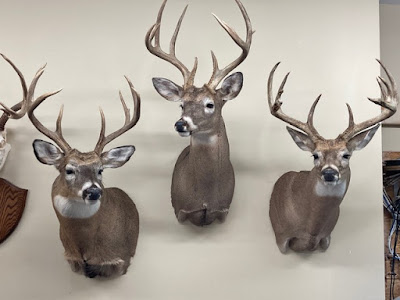 He was only able to stay out for two days so we spent our time 4 wheeling and Jeeping around the area. Oh, and working on fence. We were able to get some T posts along about 1/4 mile of the west edge of our property. Sadly, I did not get one picture during his visit.

Our big project this week was tackling the tongue and grove on the south wall. This was probably be our most challenging wall for a couple of reasons; one is the fact that we are laying out these boards diagonally rather than vertically or horizontally as with all the other walls. The other reason is that we have to work around the two large trap windows.

One would think that starting out would be the easiest part right? I mean all you have to do it figure out the proper angle to have each end of the boards perfectly horizontal then lay it against the ceiling and nail it down right? The most important part of doing T&G is getting the first few boards right, that makes the rest of it so much easier. Sounds easy in principle. In reality not so much. Getting the proper angle was not too bad. We did a few practice pieces. The first on was at 17°, too much angle, the next was 10°, close but still too much angle. 9° ended up being the perfect angle.

So now we just need to cut the first board to length and throw it up. And it worked fine up to a point. The diagonal board fit perfectly up against the ceiling the whole length except 3 of the ceiling boards were about ¼” higher than the others leaving a ugly gap between ceiling and our first diagonal board. I spent over an hour trying to draw those 3 boards down to fit tight against the diagonal board without any luck when I had an epiphany. “What if I went up into the attic and pounds those three boards down to meet the other board. Genius! The only problem was that it was like 90 outside which means it was like 150° up in the attic plus there is only 4’ at the peak up there so I literally had to crawl over the insulation from truss to truss to the far end of the house. With Barb below, she helped me locate the proper boards and I gently tapped them down into place but it worked like a charm! Day 1 ended with 2 boards up on one side.

The next day we did the starter boards on the other side. Luckily those fit perfectly and did not require me going back up into the ceiling. Once those were up we could rock and roll on the rest of the boards on either side of the traps. Once we got to the bottom of it was the moment of truth. We needed the next board full length board to fit perfectly with the T&G boards on either side of the traps. It did take some minor adjustments but eventually, it fit like a glove!

The other challenge was getting the boards from both sides to line up perfectly in the middle as just the slightest variation will make a big difference over 10’. We left a 5½” gap between the two sections where we will put a decorative board. This not only adds to the overall look it also hides any imperfection if you don’t happen to have both sides meet up perfectly in the middle. As it turned out, ours did match perfectly!
So we took our time leveling every layer to make sure we were as accurate as possible. 5 days later we were done and are thrilled with the way it turned out! I realize this is a lot of info on just one wall but it was quite an accomplishment for us. 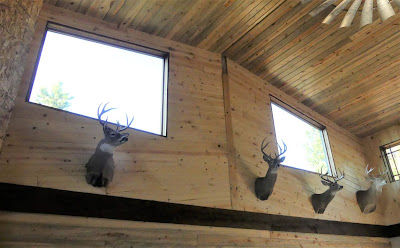 One thing you will notice about that picture is that there is no scaffolding! It has been a fixture in our living room for over a year. We are finally done with the high work (for now) and we took it down. We will put it back up when it is time to do the trim and the stone on the fireplace.

The weather has been hot! Well, hot for us. Highs have been in the upper 80's. We have taken the dogs for a swim in our waterhole a couple of times. We throw the duck dummy out there for Dakota and she would go it, drop it at our feet and want us to throw it again and again and again. I think she could do it all day!
Daisy would swim out and try to get the duck as well but Dakota is just too much faster. One time when I made Dakota stay, she actually went out and retrieved the duck as well!
Last but not least we got our J bar B Ranch sign on the garage...... 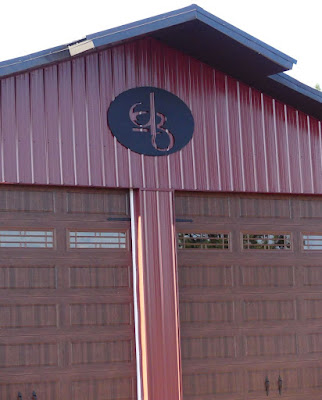 This coming week looks like more hot weather, we have a mix of project planned here as well as over at Kevin's. Hopefully we won't melt!
Posted by Jim and Barb's RV Adventure at 7:56 PM