The Worst Week of our FT'ing Lives; February 2015

Brrrr! That is the only word (Is that a word?) that describes this week. Although not as cold as many of our northern friends it certainly was cold for our area.

For you southerners believe it or not these negative temps do not stop most from getting out and enjoying the outdoors. As long as you are dressed for it, you can go out and do anything you would normally do. Barb has been still taking Dakota for walks and we used the hot tub every night this week except one. Getting in is a bit chilly, sitting in there is heaven and getting out is not too bad as all that residual heat stays with you while you run inside. On one night we were out there and it was -8f. It was a clear windless night and steam was rising off the hot tub. We had a nice enjoyable soak until Barb went to get out and her hair was frozen to the side of the tub! She eventually got it loose (leaving a few strands of hair behind) and scampered into the house.

Out of curiosity I checked our electrical bill to see how much it is costing us on a daily basis. We got the hot tub in November when temps were in the 30's. It is hard to really compare as temperatures and other factors impact our usage but from the graph below it looks like we were using a little less than $1/day in electricity. You can certainly see when we got the hot tub and it was heating up where we hit $3 usage that day. Then it leveled out to just below $2/day except when the temps (the black line) really dipped this past week where it is hovering right at that $2/day mark. So on average it looks like it is costing us about $1 a day.  We are getting well over that amount in enjoyment and relaxation so I would say it is worth it!

The deer have been especially furry during this cold weather and have been eating a lot more needing the extra energy to keep warm. 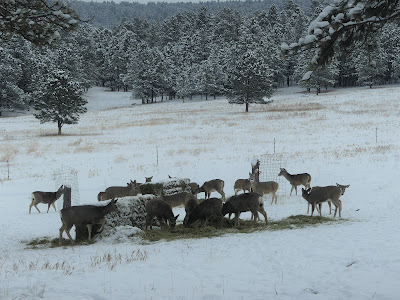 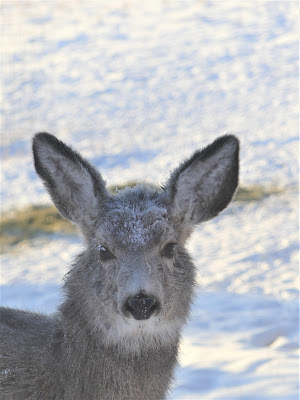 The majority of the week was spent working inside. No pictures this week as most of what we did was trim, staining and varnishing and as exciting as that sounds, it was just not picture-worthy. As much as we enjoy working on the house, we are ready for a break. A break from the house, a break from the cold and a break from the snow. So where are we going? Well, to Pennsylvania where it is cold and snowy to work on our daughters house of course!

Remember a few weeks ago I had posted how every Hallmark movie basically has the same plot? Well, someone had sent me a link to a very funny YouTube video that I just have to share... Every Hallmark Movie Ever - YouTube

The other notable thing that happened this week made us shutter. You know how Facebook pops up memories once in a while? Well we had one pop up this week that we will never forget as it changed our lives forever....... First I shall set the scene.....

It was our first year on the road and as fulltiming rookies we were excited to attend our first rally and meet some like-minded people. Little did we know what was in store for us. The location was sunny Florida and we had just arrived at the rally. We were a little late and all the good spots were taken so the only spot left were on the outskirts of the group next to what looked like an old abandoned 5th wheel that someone had discarded years ago.

As we drove around it, the first thing we noticed was the stench. OMG, did something die in there?!?!? It was like someone had left their black tank valve open. That is when  we noticed a sewer hose across our path. We had to swerve to avoid it but as we did the truck started sinking in this pool of "sludge". I kicked it into 4WD and powered through, sh#t was flying everywhere...literally.

We finally got around it, found some dry ground, parked and got out. We had just started setting up when the door of the "abandoned" 5th wheel flew open and this woman stumbles down the stair. She was wearing the shortest Daisy Duke shorts I had ever seen and a halter top that left nothing to the imagination. It was barely big enough to cover the pack of Marlboro she had tucked in there. Her long dark hair was in pigtails that pretty much stuck straight out from not being washed in quite a while. In one hand was a Pabst Blue Ribbon and the other was a stub of a cigarette. She staggered over to our trailer in a voice that sounded like it belonged to a 60 year old sailor said "Well, hi there big fella, we don't get many visitors out here". I quickly jumped behind Barb to protect me when I saw something else emerging from the trailer. It is hard to describe but I will do my best.... Picture if you will a muscle shirt 5 sizes too small stretched over a frame that had no muscle at all. The bottom of the shirt did not even come close to covering the hairy beachball he had hiding under there.

He too staggered over and his lips started moving as though he was trying to form a sentence. I leaned in to try to hear what he was saying when he let out a huge belch that knocked the hat right off my head. At that very moment I thought that sludge pool behind their trailer did not smell so bad after all. Without saying a word, he finished the rest of his beer, threw the can on the ground, hitched up what I am guessing used to be grey sweat pants and turned and walked back to his rig kicking other discarded beer cans along his way. As he got to his trailer he turned and yelled "Woman, get back in here, I need some breakfast!"

She gave me a wink and a smile that made me throw up in my mouth a little, turned and staggered back to her rig. Barb and I stood there in disbelief. Did that really just happen? We finished setting up and started talking about our new neighbors. Barb and I like a good challenge so we took it upon ourselves to see if we could socialize these two beasts. Over the next week, although we never got them sober we were able to get them somewhat cleaned up and presentable.

We even snuck them into a few rally events so they could socialize and communicate with other people!

When we left there Barb and I were quite proud of ourselves having set some poor lost souls on the right track. I wish I could say that this story has a happy ending but sadly they reverted to their old ways. Last I heard they were living in a shack somewhere in the north woods of Minnesota. My advice to you, is that if you are ever driving a lonely desolate road up there and see a woman in short shorts and a halter top hitchhiking along the road speed up, do not stop, it is a trap!

Posted by Jim and Barb's RV Adventure at 9:20 AM