It is amazing how something so small can bring such a big smile and joy to someone but I had not even met Zoey yet and I knew I loved her. Not because she is cute as could be or because she looks at me like I mean the world to her, hopefully that will come later. I already love her just because I can see and hear the joy she is bringing into Barb’s life.

I know that some of you may find this hard to believe but Barb does not have it easy. One would think being married to me is enough for her but I will reluctantly admit that maybe, just maybe I can be a handful at times and she needs a little bundle of joy in her life. Since losing Daisy, we have both felt an emptiness. We still miss her every day and look at her picture often. If she could read this we would want her to know that Zoey is not here to replace her, that is impossible and not what we are trying to do but Barb is ready for a Zoey in her life right now.

To be honest when we first decided to start looking we were not totally ready for a new pet. But knowing the search would take weeks or even months we started the search. The first step was finding reputable breeders. Sadly there are a lot of scammers out there who prey on people looking for dogs. You need to do your research before sending a deposit. There are horror stories out there where people have sent deposits, flown out to pick up their puppy only to find out it was a fake address and the puppy never existed. Luckily for us Barb found Foster Lake Frenchies. Amy and Eric were over the top with emails, pictures, videos, posts on Facebook and even Facetiming with us more than once. It did not matter how many questions we had, they answered each and every one of them. We felt very confident that we were dealing with not only a reputable breeder but one that loves and cares for their pets as well.

Barb flew from Rapid City to Portland (via Dallas) last Thursday to pick her up. There were more direct flights with other airlines but due to their pet restrictions she chose American Airlines which meant going through Dallas. Delta required pets to be 9 weeks, United was 16 weeks. American only required pets to be 8 weeks so American it was!

After checking into her hotel, she anxiously awaited the arrival of Zoey. Amy, Eric and their daughter arrived with Zoey. Barb was going to get some pictures of everyone but Zoey was their favorite of the litter and it was an emotional exchange. When Barb sent me this picture my heart burst with joy, just seeing the smile on Barb’s face and the sparkle in her eyes. Worth every penny! 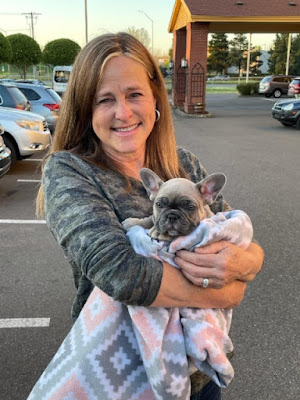 Amy and Eric even brought a little "Puppy Pack" which included everything she needed to get Zoey home. 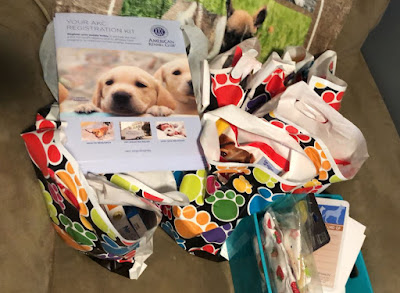 After they left. Barb took Zoey to her room where they played for hours and got to know each other. Barb of course had to dress her up in her piggy pajamas!

She said Zoey just zoomed around the room, especially liking the mirror which I am sure she thought was one of her pup mates! There are 2 videos in this post, all of which are very short.

The next day they took the shuttle to the airport for the flight from Portland to Dallas. She had Zoey in her dog carrier which fit under the seat in front of her. Her connection in Dallas was tight with just 50 minutes between flights so when they announced a 2 hour delay before even leaving Portland she knew she was in trouble. She called and I looked for other options but there just was not any so she just had to go with the flow. They finally boarded and had another delay before finally taking off.
She said the plane was packed but Zoey was an angel on the flight, just staring out of the carrier and not making a peep.

When they got to Dallas she found out there her connection to Rapid City had also been delayed and was still there! Talk about luck! This was a smaller plane with two seats on either side of the aisle. Barb’s seat mate was a women who grew up on a ranch about 2 miles from our place, what are the odds of that!?!?!

It had snowed (again) since both of us had left so there was 6” of fresh snow on the ground. I don’t think Zoey had ever seen snow before and was tearing around it like crazy!

Barb slept on the floor with her the first night fearful that Zoey would jump off the bed and break a leg or something. That had to be good for her back!

Now the fun begins.  House breaking, potty training....Hope we get that pretty well under control before our flooring is installed! Barb says she tears around the house like a wild thing and is already trying to chew on everything in sight.

Luckily our house is pretty much puppy proof so there is not a lot to chew on or so we think, I am betting Zoey will show us otherwise in the next few days!

For those of you who missed how we came to decide on getting a Frenchie, you can click this link and catch up with this post right here.

Posted by Jim and Barb's RV Adventure at 6:53 AM