The Adventures of Onid and Asil

We ran across a lot of people on the road. Some are "normal" while others....well, let just call them Abby-Normal . This tale is about one of those couples. You can decide which category they fit into. We have not talked about them a lot as we just did not know how to describe them but today I would like to introduce these two characters; Onid and Asil.  As a disclaimer I want to mention that these two characters are completely fictional and in no way depict the actual lives of any friends of ours...or does it?!?!?

It is 7:00 in the morning. Onid and Asil are sitting outside of their cabin enjoying the quiet of the early morning in their super-secret undisclosed location. Both are drinking their preferred morning beverage. For Onid that means a warm can of Blatz beer from the case that sits within arm’s reach of his chair. Asil is more refined, thinks warm beer is disgusting. Instead she picks up the ½ bottle of Schmirnoff  Vodka off the concrete where she discarded it the night before. “Chilled by the night air” she thinks as she presses the bottle to her collagen infused lips and takes her first of many swigs of the day straight from the bottle. Sadly, ½ of the swig missed her lips and spills onto her 2 sizes too small tank top marked with the past three days of vodka and various food stains. She internally curses the do it yourself injection kit she bought at “The Walmart” the week before that left one side of her top lip as plump as a strawberry while the other side is a flat as cat in the middle of I-90. Although Onid likes the look it is hell on her drinking. But this is the life she chose for the last 32 years and truth be told she loves that man to death.

Letting out a big belch Onid yells “Make me some breakfast woman!”. Asil looks over at him, sitting in the lawn chair in his yellowish?, “once-white” tighty whities. His hair is rumbled and the strap marks from his CPAP machine are still etched across his face. An engorged mosquito whose blood alcohol level is now well over the legal limit is impaled itself just below Onid’s unibrow, right between his eyes. She has an urge to throw up as she looks at him. “Please don’t let this be morning sickness” she thinks hoping upon hope that it is just the sight and smell of him that is making her retch.

Onid scratched himself, looks down at the cracked concrete littered with empty cans and bottles, and using his toes, plucks the head of a dandelion growing between a crack. He then belches again, laughs and says “I dun the weed’in for the day, let’s go have some breakfast”.

Oh, how she loves this man. They hold hands as they walk into the kitchen to see if the cats have left them any canned cat food they can spread on some toast…..

Well, that is it for this episode of the Adventures of Onid and Asil. Do they have any cat food? Is Asil really pregnant? Will Onid pick any more weeds today? Stay tuned for the next addition of this adventure to find out!

Meanwhile 622 miles to the southwest Barb and I have been busy working on the house. We had picked up our flooring in Rapid City last week and this week was set aside to install it. Kevin came over and helped us get the first few rows going as like many things, starting out straight it critical.

Day 1 got us ½ way through the living room and dining room area. On day 2 we were able to finish the kitchen and living room 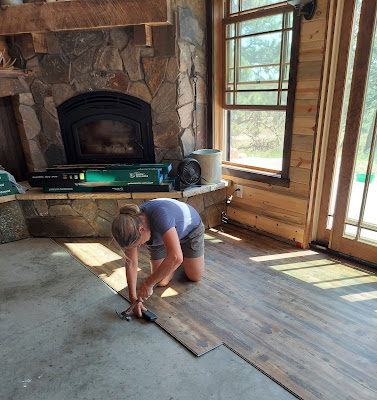 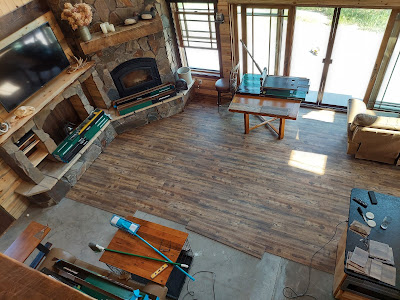 Day 3 brought us through the bathroom. 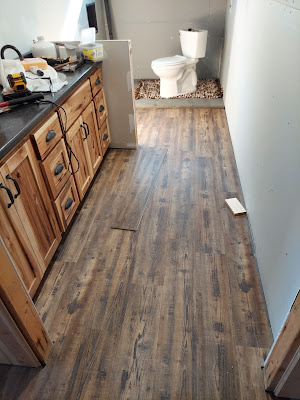 Day 4 and 5 were the bedroom and laundry room.
It is slow, tedious work but only about a 5 on the difficulty level and we save a little over $2,000 doing it ourselves. Barb probably did ¾ of the work herself. She came and got me off the couch when she had a difficult cut that had to be made or when I needed another beer. Actually, I was working on other projects....really!

Like fixing our pellet grill. For those of you who have one NEVER leave it out in the rain. If the pellets get wet, they swell then harden like concrete totally clogging up the auger mechanism. I had to take the whole thing apart and basically chisel the hardened pellets out of the auger tube.

We finished working by 5:00 each day which allowed us to get out a few evenings. One evening we were invited over to Jim and Carmen’s (our neighbors to the west) house for happy hour. They invited our neighbor to the east as well. We spent over 4 hours together and had a great time!

Monday night we went to dinner with our neighbors to the south. Tuesday, RV friend Richard stopped by with his girlfriend Linda and her two granddaughters. Richard and Linda brought all the food and we cooked out of the grill. We had not seen Richard in about 3 years when he helped us pull fence and install the underground plumbing pipes. We had never met Linda. They are traveling with her grandkids (7 and 8) for a month. Although they are great kids, they are full of energy! They played with Zoey most of the afternoon and actually wore Zoey out!

It was great seeing Richard and meeting Linda, they are welcome back anytime!

Once the flooring was done we put in the bedroom and bathroom doors. For the last year or so we have had nothing but a shower curtain on the bathroom door. Finally, a door we can shut, no more 4 legged critters pushing through the curtain to see what we are doing in the bathroom! 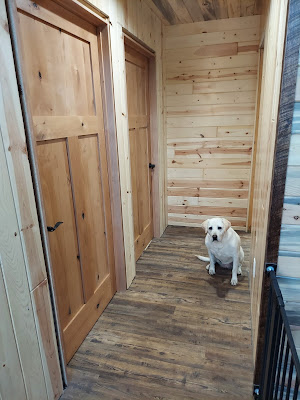 Speaking of bathrooms, Kevin formed and poured the shower pan in the main bath. First he put a thin layer of mortar in the shower area, sloping it towards the drain in each direction. Once that was dry, they laid down the rubber matting on top of that and about 1’ up the walls. Then it was time for the tile backer to go on the walls and a second layer of mortar on the rubber again sloping towards the drain.

Then it was my turn to take over putting shower tape and a liquid rubber sealant on all the joints. We are now ready for tiling! After 6 weeks of waiting it finally arrived this week!

On the dog front, both Zoey and Dakota are glad to be home. Zoey was the perfect dog in the camper. Not running around, sleeping through the night and not waking up until 7am. Now that she is home she is running around like a puppy possessed and waking up at 5am! .She is forever stealing our tools while we are working.....

Barb was trying to take a cute picture of her out in the wild flowers. Every time Barb would pose her next to a pretty flower and try to take the picture, Zoey would look at the flower and eat it! 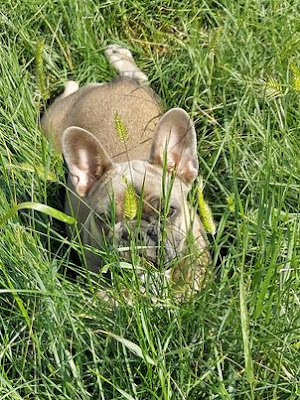 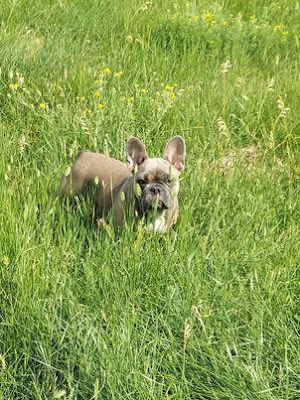 She's also a little sneakster as well and is always trying to dart through your legs to get outside whenever we open the door. She thinks it is a game as Barb chases her around the yard. After a while Barb just gives up, comes inside gets the treat bag, crinkles it and Zoey comes a running! She had her 5 month birthday this week and is now 17lbs.

Another trick Zoey has learned is to jump on Dakota’s bed each night when Barb drags it into our bedroom each night. Once Barb starts dragging the bed, Zoey stops whatever she is doing for a ride. I will try to get a video of that for next weeks post.

After my editor and attorney reviewed this post they insisted that I include the following disclaimer:

The events, characters and firms depicted in the first few paragraphs of this blog post are fictitious. Any similarity to actual persons, living or dead, or to actual firms, is purely coincidental. Really!

I have no idea why they wanted me to include it but just in case, we are going to hunker down here in our "undisclosed" location standing guard fearing paybacks for the completely fiction story above!

Posted by Jim and Barb's RV Adventure at 4:40 AM