I Did it Again!

Do you believe in miracles? Do you believe that lightening can strike twice in the same place? Well, it did this week when I again caught the biggest fish this week!

For all you non-believers, haters, Scrooge’s and if there’s not a picture then it didn’t happen people who did not believe I caught the biggest fish last week, here is your proof! 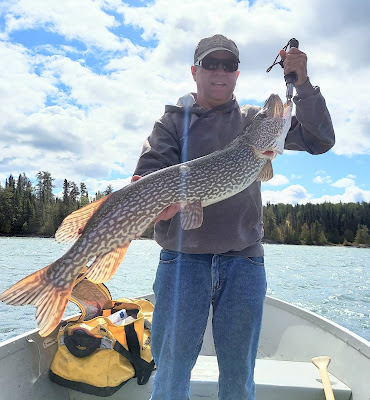 That’s right, that is me holding a 40” northern pike. And yes, I caught it all by myself, and no, it is not a fish that Barb caught and just let me hold. Geez, sometimes I think some of you think I just make things up to make myself look better and I would never, never do that! (Insert dramatic pause to see if God strikes me down for writing that sentence).
After Bob and his crew left last week Barb and I had to go pick up the motors and gas tanks off the boats they used on one of the lakes they were at last week so as long as we are out there……we may as well fish it! It was not an easy trip as the winds beat us up a little but we did manage to catch several very nice fish in addition to the 40"er! 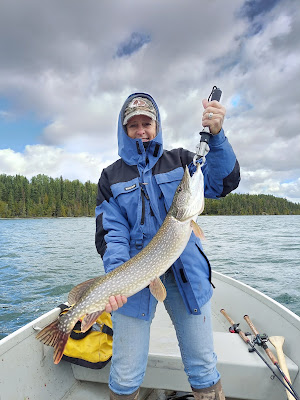 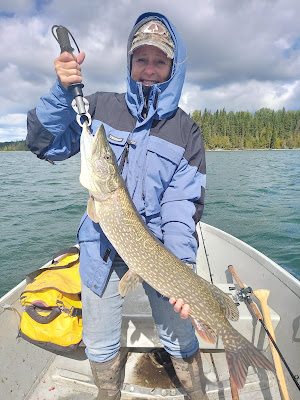 The next day our good friends Doug and Connie arrived from Wisconsin. Doug and I met back in the late 80’s and have been good friends ever since. They stayed in our cabin with us which we both appreciated as Doug is a wizard in the kitchen!

They had scheduled 3 days of fishing with us so we planned to make the most of it. Day 1 we went to Northwind where all 4 or us loaded into one boat and hit the water. 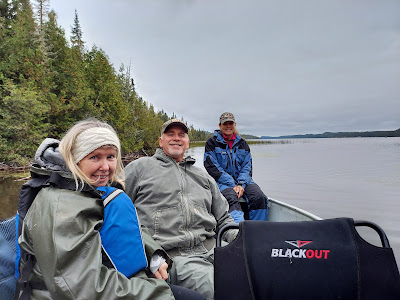 Although it was a little tight having all of us in one boat it was nice to spend time together rather than trying to talk between two boats. We took them directly to our “honey hole” where we started catching fish immediately. I’m not lying when I say we had several times where all 4 of us had fish on at the same time. (See, once again I was not struck down). After a couple of hours we had our 16 take home fish and we threw back 4-5x’s more than that.

We hit a few other spots on the way back and soon day 1 of their trip was in the books. That night Chad stopped by for a visit and a beer(s). 3 hours later, we were still talking and telling tales. Doug had not been up here for 7-8 years so there was a lot for them to catch up on!

Day 2 was our scheduled Onaman day. As you will recall, this is the walk-in only lake that requires a 1 ¼ mile hike into in order to access the lake. For medical reasons Connie cannot walk that far so Chad contacted the MNR and requested an exemption so we could bring her in on a 4 wheeler. In order to get the exemption you have to get a doctor’s note and submit it to the MNR for approval. You also need to provide the date you are going in as well as a detailed description of the 4 wheeler going in.

Permit in hand, we were off to the lake! It is about a 1 ½ hour drive from camp. We stopped a few times to make sure the 4 wheeler was not going to jiggle loose and fall out on these rough gravel roads. Once we got there we unloaded the wheeler and Connie and I were headed to the lake! 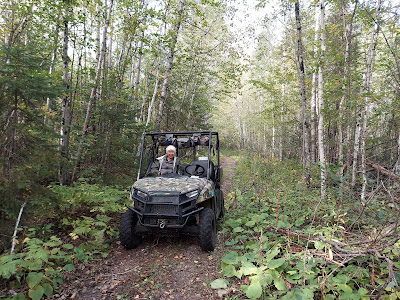 Doug and Barb had to walk.  That is the other rule about taking the 4 wheeler, you can only bring the passenger, no one else AND no fishing equipment. So Barb and Doug had to carry the poles and other gear. We did not know how many trees were going to be down on the trail, which is why I drove the 4 wheeler instead of Barb. Ends up there were just a few that we were able to drive right over.
Once at the lake we saw it was dead calm. How can a lake that big be dead calm, like glass? We have experienced this a few times and the fishing was slow each of those times.

We went directly to one of our favorite spots, fished it for 30 minutes and did not catch a fish….oh oh. Then we went to the next spot and started catching a few. Doug hauled in a nice 25” walleye.
The last spot we hit was where we got most of our action on a rocky point in about 12’ of water. At one Barb and I got a double of 23"ers and took this selfie..... 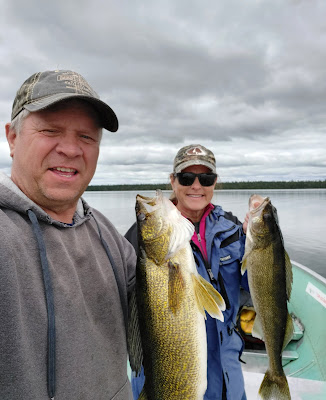 All in all, we probably caught 20 each, all between 20”–24”. Not a bad day of fishing at all!
Our last day of fishing with Doug and Connie brought us to the lake Barb and I started our week trying to catch some more northern pike. I was a little afraid to go there as it would give Barb the opportunity to beat the 40”er I caught on a few days earlier. Do I put a nick in her line just in case she hooks into one? Do I give her a lure with defective hooks? So many scenarios went through my mind to make sure I ended the week with the top fish. Not being able to think of a sabotage I could get away with I just decided to go with fate.
The forecast was for rain all day…. 90% and it was not wrong but we loaded up anyways and hit the trail. This lake requires a 4 ½ mile 4 wheeler ride to a spot where Chad has a couple of boats stashed in the woods. Doug and I brought the motors, gas and fishing equipment out on the first trip, then we came back and picked up the girls.

It is a narrow rutted trail but off we went with Connie in front with me and Doug and Barb in back.

Once on the lake we started catching some nice pike. Somehow my phone got screwed up so I was not able to open it to take pictures. I think it had something to do with the fact that this phone requires a “swipe” to open and that is virtually impossible in the rain with pruney, water-soaked fingers.

Barb hit the board first with a nice 32”er followed by Connie with a 35”er. Doug and I were each catching fish as well most of which were in that 27”-34” range. 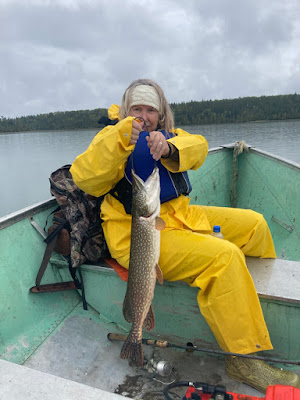 We were fishing an area that was known to hold some really big fish, in fact Bob’s group caught a 42”er in this spot last week so I knew my record for the week was in serious jeopardy. Barb and I were casting our spoons when…Wham! Fish on! Big fish…When we got our first glimpse of it we knew right away it was going to set a new record for the week. This thing was huge! Not only long but thick and fat. I know at this point you are wondering which one of us have it on. I also know that 98% of you are hoping it is Barb. Why, why all the hate?!?!

The fish made run after run. Every time it would see the boat it would take off again, and again, and again….. We finally got it back to the boat and heaved it in. We stretched it out on the seat, put the tape to it and measured it out at 43”. So who caught this toad?

Yours truly of course. Was there ever any doubt?!?

After catching that, I released it and said “Okay everyone time to go home” thus solidifying my victory for the week! Why test fate any further by fishing another hour?

On the bear hunting front, although Barb had a couple opportunities, she has put her bow away and we are going to concentrate on fishing and relaxing the rest of our time up here. She said she had fun, got over a lot of her “bear fear” and would definitely do it again.

We also got some very sad news when one of our nieces messaged us saying her brother, our nephew, was found deceased in his house this week. David was 47, had his ups and downs in life but was a very good kid living life to its fullest. We last saw David in 2017 when he stopped and saw us as he was trucking through the Tucson area on his was to California. Rest in Peace David…. 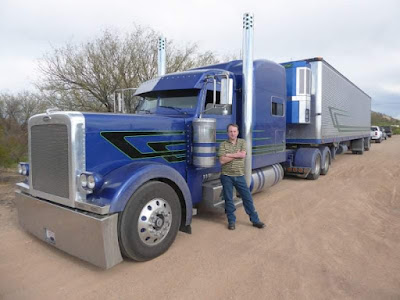 Posted by Jim and Barb's RV Adventure at 7:52 AM