The first order of business this week it to help me settle a bet. Several of us had a heated discussion this week that almost ended in fisticuffs. You see, there are white fish in some of the lakes around here. The question is....when you go fishing for them do you call it White Fish fishing or just White fishing?

This past week was our last week here at Pasha. 4 weeks just flew by. We have checked off everything we were looking forward to doing up here. Over the past 18 months we have dreamed of getting back up here and fishing our favorite lakes, catching countless fish and just enjoying nature. We have seen the leaves turn from green to red and yellow. We have seen the Northern Lights dancing in the midnight skies. We have seen the sunsets go from 9:00 at night to 8:15. Winter is definitely on the horizon. 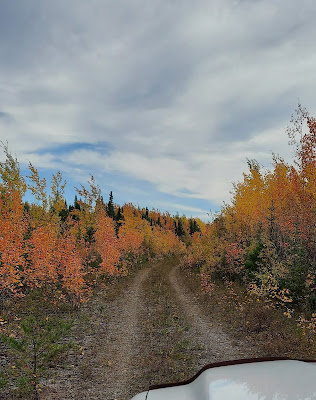 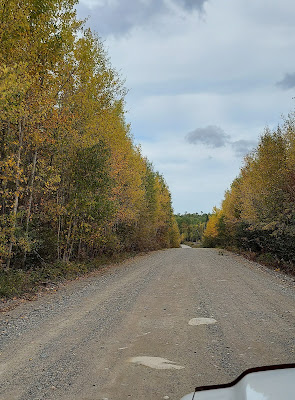 As much as we enjoyed the hunting and fishing, it was the people who really made the trip memorable.. We had supper and beers with Chad almost every night. Probably the highlight of the last 4 weeks…..Laughing and telling stories, it is a season I will never forget just for that aspect alone. Spending time with Bob, Rob, Doug and Connie and this past week, Brian.
The fishing was the best we have ever had up here, but it was the people that really made it a trip special. We really hate for it to end.

Besides the people, Barb said the highlight of her time up here was bear hunting and just watching the bears do bear things in the woods. My highlight was watching Barb watch the bears do bear things in the woods. I got chills just watching Barb experience that for the first time. I think Chad’s highlight was anticipating what Barb was making for supper each night and having a never ending supply of cold beverages waiting for him at the end of the day!

Or perhaps it was learning how to play fetch in the cabin. I think she could do it all day long!

This week was more of an adventure week for us. We had fished all the lakes on our bucket list, now it was time to add some remote bonus lake fishing. First up was a lake that I bet does not get fish more than a dozen times a year and had not been fished at all in the past 18 months. We were sure that the fish would just jump in the boat once we were on the water.

But first we had to get to the lake which was not going to be an easy task. This particular lake is 5 miles off the main road down an old overgrown logging road which now is just a canopy covered trail. It is a two day process to get to this lake. Day 1 found Ian (the camp guide and hired hand) and I clearing the 5 mile trail of any large logs and downed trees. We also had to navigate a couple of low areas and beaver dams.

It was not nearly as bad as we thought it was going to be and we made it to the lake shore in just over an hour. The landing is located at an old mining camp where they had core shacks filled with all their old cores samples...

Once we got there, we checked out the landing and the boat that had been stashed there for the past several years.

The following day Ian, Chad, Brian (a high school friend of Chad’s) and I loaded up our 4 wheelers and headed to the lake. Since there is only one boat on the lake Ian brought another one on top of his buggy. Even having cleared the trail the day before, it was adventure just getting into the lake….
Once we got to the lake Ian and I jumped in one boat while Chad and Brian took the other and we went off in different directions to our own favorite hot spots. Once Ian and I got to ours, I dropped my jig in the water and had a fish on in less than 30 seconds. Then Ian had one on as I was still reeling in mine, double on our first cast!
Both were keeper (17-18”) fish so I got out the stringer and got it ready as the fish were flopping on the floor of the boat. I got one fish on the stringer, was reaching for the other when Ian caught another, and another, and another and another. I had fish flopping around like crazy! We had 6 fish on the stringer in less than 5 minutes, all fat and the same size!

Chad and Brian motored up to us 20 minutes later and they had had similar success. We left the lake 2 hours later with our 16 fish and 2 bonus grouse Chad got on the trail in!

Barb and I fished the same lake the next day with the exact same results although we did not keep as many fish as we had not eaten everything from the previous day yet.

We also fished our favorite northern pike lake again and although we caught fish, we did not catch anything over 40”. When we were done, we pulled the boat up into the woods and flipped it over. It  is now ready for the long winter ahead. Over the next few days between Chad, Ian and I, we fished a couple different lakes pulling motors and flipping over boats putting everything to bed for the winter.

Chad even talked Barb into going out bear hunting again saying he really wanted a picture of Barb with a bear to be featured on his website for the following year. So off we went back to the bear woods! This time she hunted from an elevated tree stand. Unfortunately, the bears did not cooperate but we did enjoy a couple more evenings in the woods just watching nature!

So now we are all packed up and ready to roll again. Destination unknown…. Well, that is not totally accurate, we are heading south and east to a state that we have not been to in our 8 years of travel adventures!