After returning from our 8 week sabbatical we were excited for two things; getting back to working on the house and deer hunting. Archery season opened September 1st so we were well behind the curve on getting out there trying to fill the freezer for the winter. One of the first things we did when we got home was check out trail cameras to see what kind of activity we had while we were gone.

I scrolled through the pictures eagerly looking to see a picture of a monster buck. There were hundreds of pictures but not a single picture of a buck! How can that be? There were two pictures I thought were blogworthy however.....

Then there was this guy, (well a gal actually) who snuck up on the camera, jumped up and spread her wings trying to scare me! 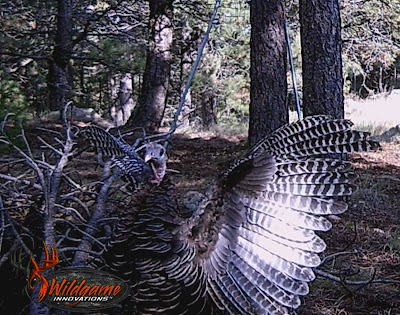 Although the bucks were scarce, there were plenty of does and where the girls are the boys will show up eventually, Especially since their rutting season begins in late October, so I set up our deer blinds and hit the woods to soak in some of the nature that we have been missing.
It was so nice to get back out in the blind and see our local creatures. There were lots of deer, mostly does doing their antics. 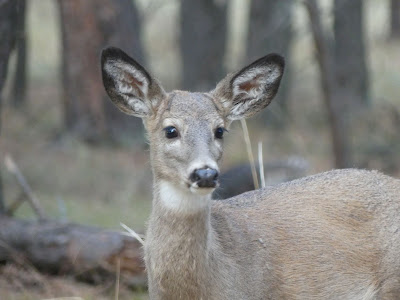 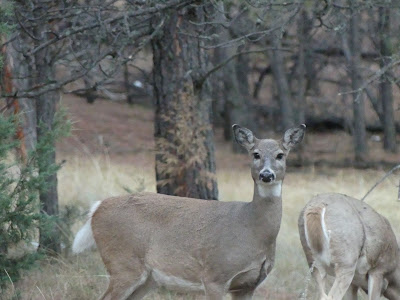 I spend a couple hours in the morning and a couple hours in the afternoon in the blind reading a book, taking pictures and just enjoying the outdoors. One of the coolest things that happened I did not get a picture of. A tiny little nuthatch flew up and perched on the window of my blind staring in at me. Then it jump up and flew onto the arrow of my bow about a foot in front of me! I just sat there silently and watched it as it looked around the blind. After a minute or so, it flew out the window and was gone.
Of course there are the turkeys. We usually see them everyday. A flock of 20-30 frequent the area and are always roaming around. But one day we had some surprise visitors at the house when these random guinea hens showed up to see what was going on at the Nelson's. They belong to a neighbor about a 1/4 mile away. Then one morning I was sitting there reading and looked up and saw a buck! Not only one but two walked into the area to check out the local does. 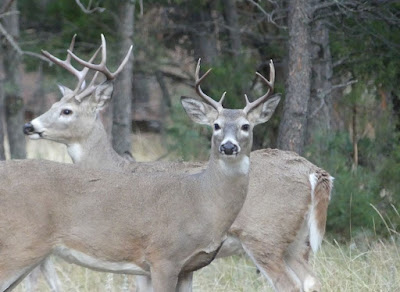 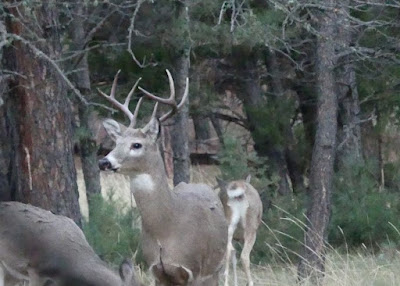 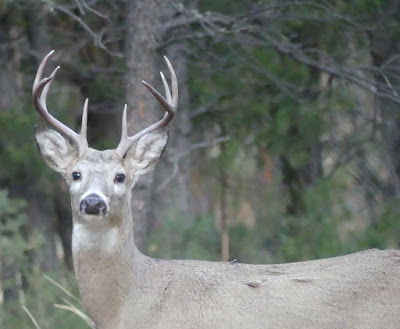 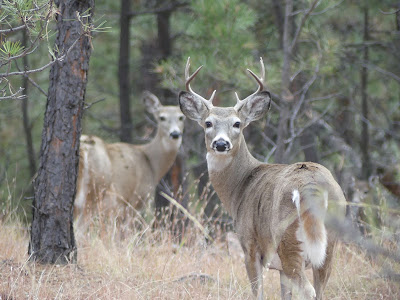 A couple of nice bucks but not ones I would harvest, I am hoping to get something a little bigger. Then one morning I come home and Barb shows me a couple of pictures that she took with her phone out the  living room window! Now this one is a shooter! 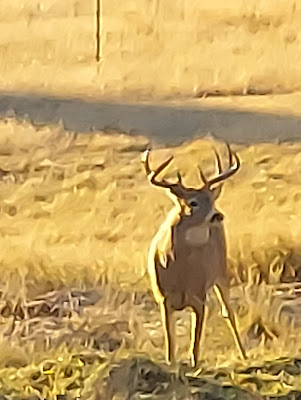 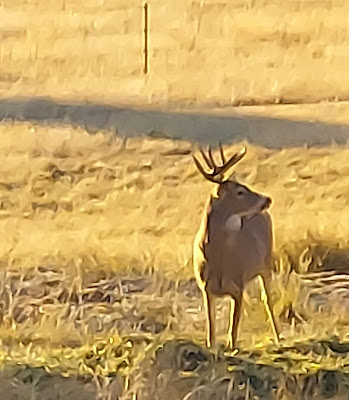 Maybe he will stick around the area and walk by me sometime when I am out hunting!
On the house front we have been busy working on the porch. We had ordered the steel for the porch roof before we left for Pasha a couple of months ago and it was ready for delivery when we returned. Kevin came over to help us get started.
We had 4 pieces of 18' steel left over from the roof of the house so Kevin suggested that we use them to create a covered wood storage area on the side of the house so we put up a couple of posts and started there!
Once Kevin got me started I carried on the next few days and worked my way north towards the driveway.

Another couple of days and we should have the whole east side done! One thing you might not notice is that the concrete is dry under the new steel and way down on the end it is wet. Every morning dew and condensation drips off the house roof onto the sidewalk, now we have a dry sidewalk!
As cool as that is the coolest transition accomplishment took place inside and we did not have anything to do with it. While we were gone Kevin tiled our shower!
He sent us pictures of the progress over the 4 days he worked on it.

How cool is that?!?! We still need to order the glass panel and I need to finish the taping, mudding and sanding of the sheetrock but then that room will be done!
Over the next few weeks we are going to continue on with the porch roof. I expect that to take a week or so of us working 4-5 hours a day as I still need to make time to get out in the deer stand!
I thought I was done with the blog, had Barb proof read it and she said that I needed to include a couple of pictures of the dogs for Pam. It just so happens that we did take a couple of pictures of them this week so Pam these are for you....
A picture of Dakota enjoying our first fire of the fall....

And a picture of Zoey with a treasure she found on one of her walks.... 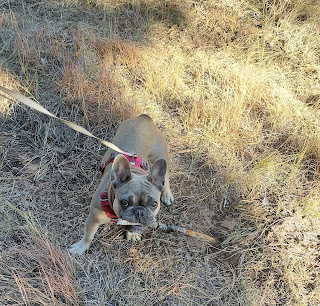 There, now I am done, time to get to work!
Posted by Jim and Barb's RV Adventure at 8:01 AM