Warning, this post contains no pictures of dogs and a couple pictures of dead animals. If that is not your thing than this would be a good post to skip....

Here are two pictures of me.... back in the early 80's, 1983 to be exact and no, that is not a mop on my head that is actually my hair. Earlier that year I had purchased a muzzleloader kit, a Thompson Center Renegade .54 caliber to be exact. After putting it together, sanding, staining and varnishing the stock I was ready for my fist muzzleloader hunt! 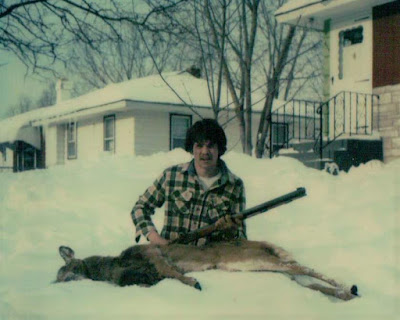 The article below was written by my friend Dan Sobieck detailing that hunt. Back then he wrote articles for the St. Paul Pioneer Press. Yes, that's right, I am kinda a big deal with my name in print. Signed copies are available, to receive yours, just send $9.99 and you will receive your own signed copy of this article! Well, actually Dan is the big deal. 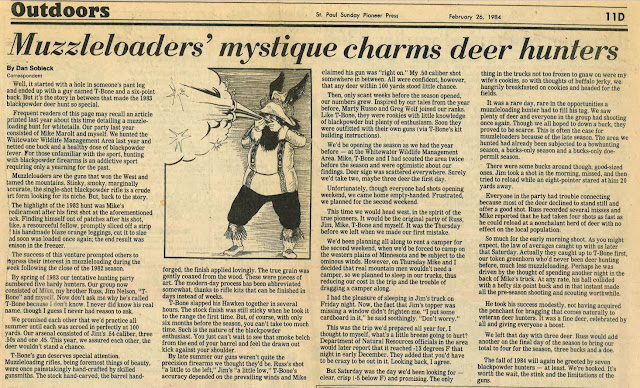 Dan was not kidding when he says it was cold. I remember that cold, well below 0F, we were freezing! And yes, we did sleep in the back of my truck in an uninsulated topper. I remember we had one of those old Colmen dome heaters. You know, those one that you fill with kerosine (or something like that) and the dome glows orange as it heats. We were lucky that that window was broke out or we might have died of carbon monoxide poisoning!
I did harvest one other animal with that rifle a couple years later when we went bear hunting up near Dryden Ontario.... 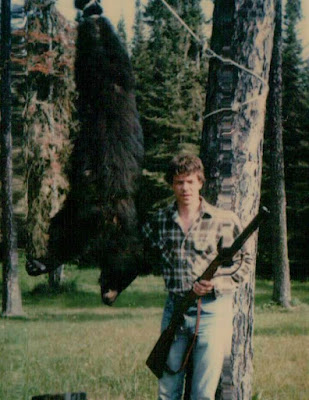 As you can see from this picture it was about the same era... in the early '80's. But since then that gun has pretty much been sitting idle for the last 35 or so years.
This year I was determined to dust it off and get it out hunting again! But first I needed to sight it in. Sighting in a muzzleloader is not exactly like sighting in a centerfire rifle. There are so many variables when it comes to muzzleloaders. First is the powder. You have to measure and pour the exact same amount of the powder down the barrel each time to make things as consistent as possible. Then you place a patch between the powder and the ball. Next, you seat the ball on top of the patch and push them down the barrel with a ramrod. Back then we shot round balls sized exactly for the caliber rifle one has. This is what that combination looks like.
I was not sure if the rifle would even fire. The balls, powder and patched were purchased over 38 years ago but I loaded it hoping for the best. Next comes the percussion cap. 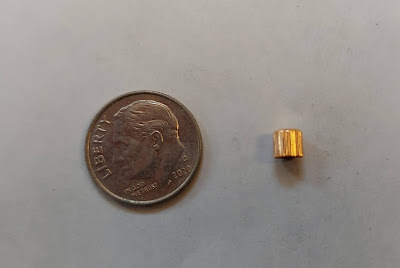 This tiny little cap is what ignites the powder charge and makes everything go boom. All set, I went outside to sight it in. I put out a target, lined up the sights and pull the trigger. POP! The cap goes off but not the powder. Now, this can be a very serious situation as if just the tiniest ember reaches the powder, it could ignite it several seconds later..... or not at all. So you have to continue to point the rifle downrange for several seconds before checking to see what went wrong. Eventually I put another cap on, lined up and pull the trigger....POP! Dang it! Something must be clogged. After a minute or so I take the firing mechanism apart and sprinkle a couple of particles of powder under the cap next to the port that ignites the main powder charge and try again...BOOM! After years of sitting idle the ball hit the target just an inch low.
Now I was ready to see if I harvest a deer with it! I knew just the deer I was hoping to get. A couple of days before I saw a nice wide 8 pointer come by, and he was dragging his hind leg. He was obviously injured and there was no way he could outrun a pack of coyotes. Out I went in the hopes of seeing him again! I saw several deer but not The Wide 8. Just as I was thinking he was not going to show up, here he comes limping through the wood....As he got into range, I lined up my sights, and slowly pulled the trigger....BOOM! Through the smoke I could not see if I hit him as he ran/limped through the woods out of sight.
I decided to wait overnight before I go looking for him as the roundball does not do near the amount of damage as a conventional bullet or an arrow. Plus, it was plenty cold (in the teens) so the meat would not spoil overnight. Early the next morning Barb and I took up the trail and found him piled up a couple hundred yards from where I shot! 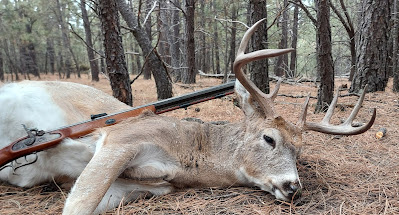 I could not have been happier, after 38 years I shot my second deer with that gun! Although not TBO, he is definitely a nice one!
As long as the gun was out, I thought I would make a video shooting it, some in real time, some in slow motion. It is only about a minute long and I think it turned out pretty cool!
Our friends Doug and Connie from Wisconsin showed up later that day. If you recall, Doug is a very talented taxidermist who has done all our mounts. The reason for their visit was not only to see us but also deliver our two mounts from last year. My archery whitetail.....
.... and Barb's very first archery harvest, her nice tall mule deer!
The next day we butchered The Wide 8 and got most of him in the freezer. Unfortunately, one hind quarter was too damaged from that previous injury to use the meat. Doug then aged the deer by studying the buck's teeth. The teeth were well below the gumline aging the deer somewhere around 7-8 years old. Doug said even if this deer was not injured, he probably would not have made it through the winter given his age and the condition his teeth were in. Definitely a good one to harvest and more than likely saved him a lot of pain and suffering.
Doug and Connie left on Tuesday and headed back to Wisconsin. It was so nice seeing both of them, just wished it could have been longer. I was a bad host and did not even get a picture of Connie this trip!
So now it is time to oil up the gun and put it in the safe, store the powder, balls and caps in a dry place and wait until 2059 when I will be 96 to see if I can do it all over again!
Posted by Jim and Barb's RV Adventure at 10:33 AM