T-shirts and shorts have been replaced with hooded sweatshirts and jeans as August has brought us much anticipated cooler weather. There is nothing like a cool crisp morning in Ontario!
The past two weeks has gone by way too fast, it is hard to believe we have less than three weeks remaining!
Last week our good friend Bob came up with a group of his work customers. This is the 5th year in a row that he and his coworker Greg have treated their customers to a Pasha Lake retreat. This year they brought up customers from Illinois, Wisconsin, Minnesota and Missouri and since they had an odd number of guests I was able to get out fishing with them on two occasions. Both to Onaman Lake. Barb and I had a heated debate on whether or not any fish I caught on these outings could be counted in our big fish contest. We never did agree on that but in the end it did not matter as I never caught anything that would surpass her 25” mark.

We did however catch over 100 walleyes, not collectively, each! Although we did not keep track I would have to say on one of the outings we had to each catch over 70 averaging a little over 20 inches! Since we try to only keep fish in the 17” to 18” range we had a hard time getting our keepers. 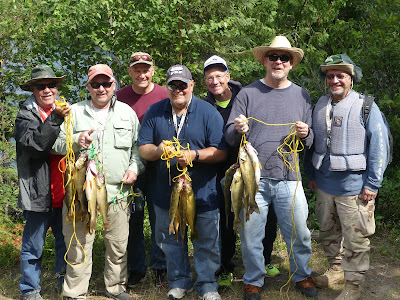 On another occasion I took two brothers out to another lake. They were both in their 70’s and had not had a fishing trip together in over 10 years. They had been out 4 times on their own and although they had caught plenty of pike they were struggling to catch some walleyes. Jim to the rescue! Collectively we probably caught 30 walleyes but again the biggest was under 25”’s so Barbs record is still intact.
Besides the cooler weather and fewer bugs, the other perk about coming up later in the year are the blueberries. They are peaking this week and ready for picking! Barb and Michelle went out one night for a couple hours and came back with two huge tubs of berries. Barb and I went out the next day and scored another tub. 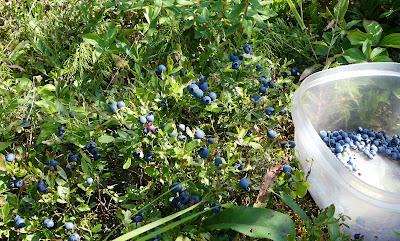 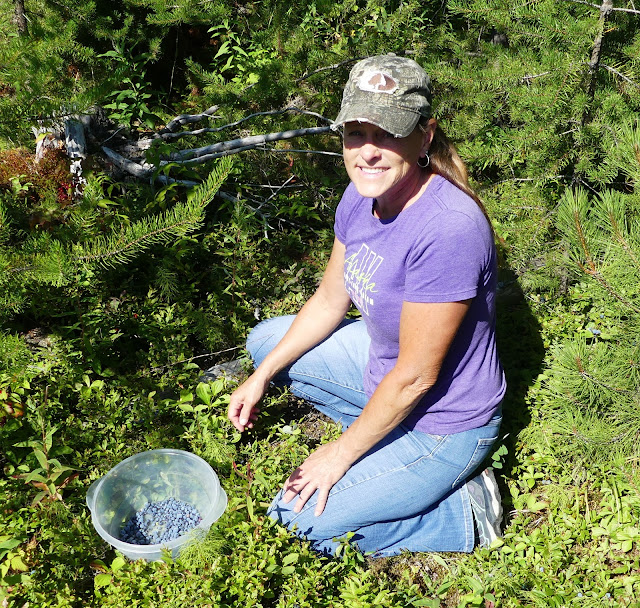 We freeze these and use them throughout the year in blueberry pancakes and pies. Speaking of pies, I was able to talk Barb into making one that night, it does not get any fresher than that! 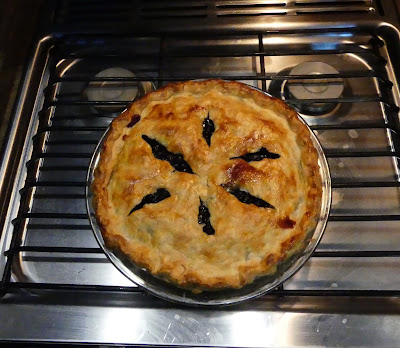 With bear season less than two weeks away I have been busy clearing out and preparing the hunt sites for the hunters. This year they will have 18 hunters 8 of which will be here before we leave in a few weeks so we should get in on some bear recoveries once the season starts!
For those of you who have followed our blog over the years, you know we try to get in at least one fishing video together each year. We have filmed several over the past few years on Onaman Lake and posted them on YouTube. We do this mainly for our own entertainment but also to give others who are thinking of coming up an idea of what this lake and the area is like. It seems like at least once a year we run into someone who has seen our videos. This year we were in the office and some guy says “You are the people in the videos!” and last year when we were on the lake someone approached us and asked if we were Jim and Barb. We said yes, and they said they watch our videos all the time trying to figure out where we fished on the lake. Little did they know at the time we were nowhere near where we usually fish!
Well this week we filmed our 2018 edition on Onaman Lake again. We got a lot of good footage which I have been busy making into a movie. Hopefully I will have it done for the next post but in the meantime, here is a picture from one of the scenes! 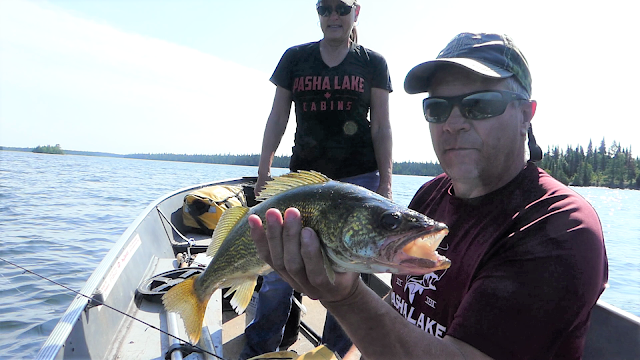