When You Mind Says Yes But Your Body Says No…..


It all started late last week when Chad brought his guide boat off Lake Nipigon for servicing. The kids were begging him to go tubing. It is a nice boat, a Lund with a 225 outboard with plenty of power to make for a fun ride. After tubing, the kids wanted to go skiing so I jumped in the boat to take some pictures and enjoy the ride.


The 225 popped those kids right out of the water like submerged corks bouncing to the surface. Round and round they went with smiles on their faces.
Back in the day I used to ski quite a bit. I have fond memories of skiing at my dad’s place on Shell Lake in Wisconsin. It fact it was nothing to ski the 10+ mile shoreline around the lake. I was not a professional water-skier but I could hold my own.  I was telling Chad about my childhood, spending summers on the lake and how I used to ski when I was younger but had not done it for years. That is when he said it. It was a surreal moment, it was almost like he said it in slow motion….”Dooo yooou wannnt to giiiive it a trrrrry?” (that is my attempt at slow motion writing).

We’ve all had that moment, you are faced with a challenge. Do you face it head on or do you cower in the corner with your thumb in your mouth? It had been years since I had skied. In hindsight the next series of pictures should be of me cowering in the corner of the boat with my thumb in my mouth but at that moment a line from one of my favorite Toby Keith songs popped it my head “I am not good as I once was but I am good once as I always was” and I said  “Hold my beer, I got this”


Adjusting the life jacket to its limits I squeezed into it and jumped in the water. Chad tossed me a ski and was reaching for the other when I said “I don’t need that one, if I can’t get up on one I am not skiing” That was mistake #1 (well, actually #2. Mistake #1 was ever agreeing to do this in the first place) as it is much easier to pull someone out of the water on 2 skis than one.


The next thing I knew, I was holding the rope staring at the back of the boat and said “Hit it!” The boat roared out of the water and proceeded to drag me, mostly underwater for the next 20 yards before I lost grip and let go. I did not bounce out of the water like a cork, evidently those kids weigh a little less than me.
Chad circled around I grabbed the rope as I thought to myself….one more try. “Hit it!” Again being dragged through the water, mouth closed, eyes closed….10 yards… 20 yards….30 yards but slowly I was pulled out of the water and I was up! This is where I should say that I was all smiles and waving like the pictures above me but it was far from that. Although it was fun, as you can see from the pictures below, it was a hell of a lot more tiring that I remember. There were a lot more pictures but they were just too painful to show in public.

After a short spin around the lake I signaled for Chad to return back to home where I was never so happy to let go of the rope. Every muscle in my body was aching and crying for relief. Luckily I was handed back my beer and all was good.
Not to be outdone, Chad was up next. He started out with two skis (wuss)……He soon dropped one ski and was going slalom (Okay a little more impressive)…..


Then he had me speed up the boat to top speed (42mph) and he dropped that ski and went barefoot! 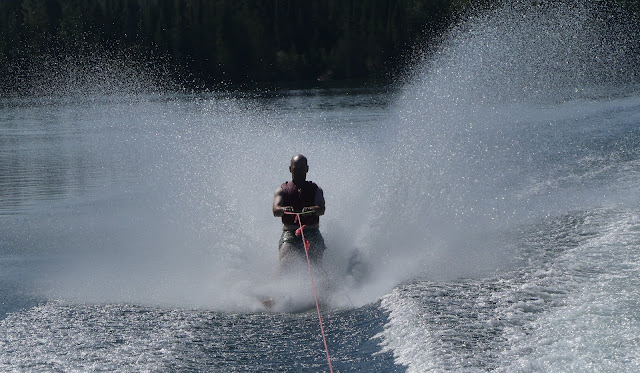 To be fair, Chad used to be in the famous Twin City River Rats Ski Club in Minnesota where they frequently put on shows.
Now several days later my body is constantly reminding me that I am not as young as it used to be so next time I am presented with such a challenge I will definitely say "No", well maybe, depends on if there is someone there to hold my beer....
Posted by Jim and Barb's RV Adventure at 5:43 PM